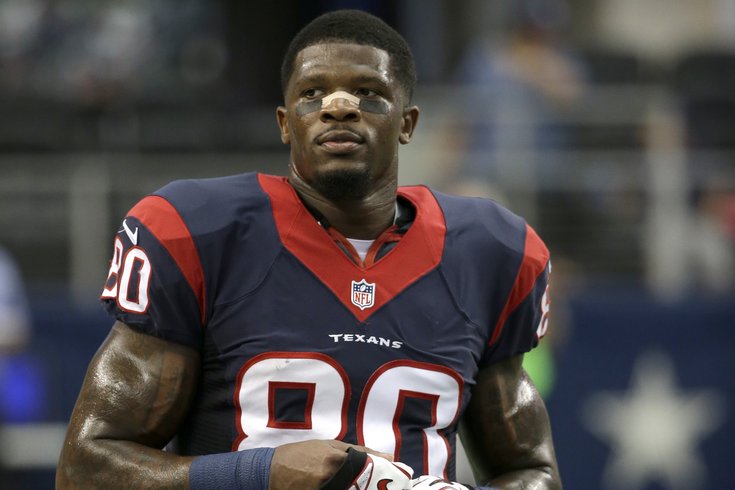 Andre Johnson could be a short-term upgrade from Jeremy Maclin at a cheaper cost.

Keeping the above (in some cases pending) roster moves in mind, let's re-evaluate who the Eagles might be targeting as they move forward in free agency:

After re-signing Sanchez, the Eagles will likely be done shopping for QBs in free agency. Of course, we'll see soon enough whether the Eagles will successfully trade up high enough to draft Marcus Mariota, as I expect them to try to do, and what that means for Nick Foles' future.

After signing Frank Gore away from the 49ers, the Eagles are probably done in free agency at running back. They'll have Gore and Darren Sproles under contract, with Chris Polk likely to sign his restricted free agent tender. The Eagles could certainly opt to draft a young back in the draft, but they can rest for now.

With Jeremy Maclin bolting for Kansas City, the Eagles have a gaping hole at wide receiver. The Eagles are higher on Josh Huff than the typical fan, but the collective trio of Huff, Jordan Matthews and Riley Cooper scares precisely nobody. Here are a few players in free agency who could make some sense:

• Andre Johnson, Texans: The Texans officially released Johnson, who was set to count for over $16 million against the salary cap in 2015. Johnson turns 34 in July, but has still been a productive receiver the last three years:

Johnson put up those numbers catching passes from Matt Schaub and Ryan Fitzpatrick.

Johnson is big (6'3, 230), is thought to be a good character guy, and recent evidence (Gore, Sproles) shows that Chip Kelly might not care all that much about adding older talent to the roster. Johnson could step in and immediately be a short-term upgrade from Maclin.

• Dwayne Harris, Cowboys: We covered Harris earlier this offseason. Here's what we said:

Harris also led the Cowboys with 11 special teams tackles last season. Obviously, the Eagles went out and made special teams personnel a priority the last two offseasons, and that paid off in a big way in 2014. Why stop now?

The Eagles released James Casey earlier this offseason, which could open up a spot at tight end if the Eagles want to keep four of them on their roster. One name that could make some sense, although I'd call it a longshot is Jordan Cameron of the Browns.

• Jordan Cameron, Browns: Cameron has wide receiver-esque athleticism. Here is how his numbers compare to tight ends competing at the Combine since 1999:

If the Eagles didn't like the available options at wide receiver in free agency and wanted to help offset the loss of Jeremy Maclin, they could perhaps get creative with an athletic big guy like Cameron. One thing to note is that Cameron got a concussion just by me typing his name.

The Eagles were in on former Broncos OG Orlando Franklin, but lost out to the Chargers in their pursuit of him. I would expect the Birds to continue their focus on the guard spot as free agency continues, however, there aren't many compelling options at guard beyond Franklin. 49ers guard Mike Iupati is a dominant run blocker who could fit in with the Eagles in that regard, but as the top free agent guard, they'd be late to the party in trying to bring him aboard, if they even had any interest in the first place.