The Navy Yard could get a library of its own

The Central branch of the Free Library of Philadelphia.

When the Free Library of Philadelphia secured that whopping $25 million grant from the William Penn Foundation in September, the general feeling was a sense of "Mission Accomplished" -- Finally, a library got a huge grant.

But while $25 million isn't pocket change, it's also not hitting the ceiling for what a massive network like Free Library could actually use.

"Ninety percent of the funding is going literally to the construction of the five neighborhood facilities to reorient them," Siobhan Reardon, president of the Free Library of Philadelphia (and Library Journal's 2015 Librarian of the Year), told PhillyVoice.com.

"A lot of our buildings haven't been touched in a deep way for 50 or 60 years -- the '90s saw improvements, but they were all about implementing technology. This, this is a deep reorientation of the buildings."

So, let's put it like this: It's not entirely unlike SEPTA's situation. Sure, SEPTA has money for improvements, but many of those improvements are so fundamental -- bridge reconstruction, elevator installation (which Free Library is also doing), etc. -- that stepping forward into the 21st century on any kind of grand scale is almost forced to be an afterthought.

Reardon said all of that necessary construction -- on five neighborhood locations and the Central Library -- is being done in a way that's mindful of what the modern library should be moving forward -- or at least in a spatial sense.

"The modern library is, you have think about it as a hotel lobby," she said -- in a tone braced for skepticism. "Think about how interesting a hotel lobby is in that they are pretty often wide-open spaces with very engaging spaces. They're physically accessible, visually appealing and there's a lot of communication and robust interaction that goes on. And when you want info, there are people in the perimeters if you want it."

Free Library's goal, then, is not to define the modern library in terms of technology, but by opening up space (she took some cues from IndyHall, she said) and eliminating the notion that libraries should be places of "Shhh!" and serve as a mere dumping ground for books. 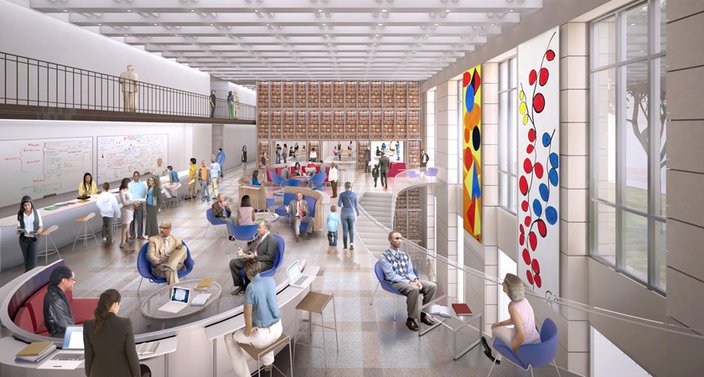 A rendering of the Central Library's soon-to-come "The Common" open space. / Moshe Safdie and Associates

"People sometimes look at me like I'm out of my mind, and that's OK, but what's important about this is, technology is not the object but the tool," she said. "Underpinning all of this is robust technology, it's just not so in-your-face. We'll provide you the online access, whether it's a computer or a tablet, or whether you want to bring your laptop into the space and have WiFi, it's just the tool and not the object."

It's not as in-your-face as, say, the robotic book-sorting system ("bookBot") being implemented in Temple University's new library -- which, in addition to the Raleigh, N.C., James B. Hunt Jr. Library it's in many ways modeled after, she expressed envy of.

"Both libraries that have [the robotic sorting system], it's completely changed their workflow," she said. "But that's far away for us."

So, the question was posed: How much money do you need to create a Free Library that fits your vision?

The answer: about $35 million more than what she's currently working with. She'd use the money to focus more on neighborhood libraries and community-building, she said.

"Thinking about neighborhood libraries rather than Central, my perfect-sized library would be around 15,000 square feet because it provides adequate space for the community -- specifically, school-aged children services can be broken up the way they're supposed to be," she said. "To build a library of that size? It's roughly in the range of $20 million."

For perspective, the neighborhood libraries are, on average, about 7,500 square feet -- half that size. A total of $18 million of the $25 million she received is being put toward reconstructing the five neighborhood locations -- Logan Library, Lovett Memorial Library, South Philadelphia Library, Tacony Library and Lillian Marrero Library. Such a new, large neighborhood library, she said, would probably be opened in Northeast Philadelphia near the Bucks County line, or, alternatively, she said she'd level the long-closed George Library at 52nd Street and Lancaster Avenue and build it anew.

"It deteriorated a long time ago and we didn't have the money to fix it," she said. "But I'd level it and build it as a technology and learning center. ... That's how I'd spend my next $20 million."

The remaining $15 million, she said -- and this one's a doozy -- would be put into creating a new library at The Navy Yard.

"I've been having conversations down there, and because it's getting built up every single time I'm down, that would probably be the next place I build," she said. "The daytime population down there? It's in the thousands. Basically, you run a library where there's a population -- so that'd be a nine-to-five library, and it would be heavily used. And it would be a good community space; there's so much possibility down there, especially when they eventually build residences."

In the meantime, she's wrapping up fundraising for the $28 million renovation of the Central Library, which is still in the process of being drawn out and architecturally envisioned. But when completed, she said it will certainly have a finished "innovation lab" (kind of like a coworking and networking resource space for business folks) and an 8,000-square-foot, opened-up common area -- "The Common" -- that mounds of old stacks used to fill. Construction, she said, should begin by the end of the year.

Without the new digs, Free Library is already a wildly popular service to the community: It serves 15 million visitors per year (nine million are virtual), circulates 6.5 million books among members, owns a grand total of 6 million books and DVDs and, she said, brings in about 30 "A-list" authors per year.

But all of that in mind, is the Free Library of Philadelphia, at present, one of those "modern libraries" in question?