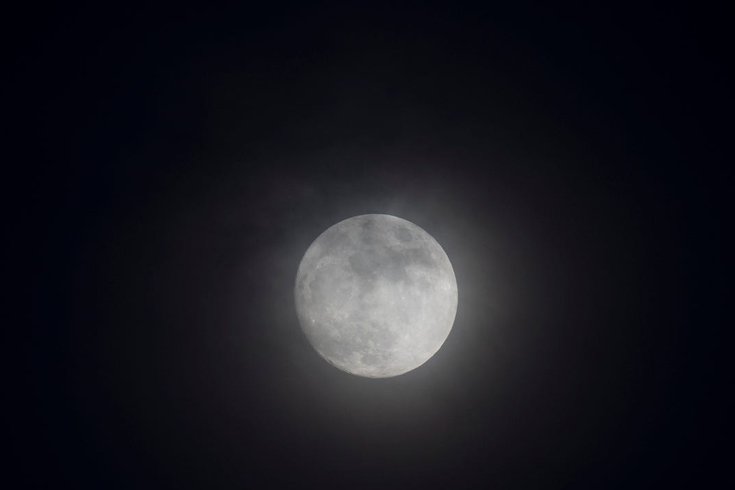 July's full Buck moon may appear red or orange due to the smoke from the wildfires on the west coast. Above, the moon rises in Southwest Florida, Thursday, July 22, 2021.

Residents of the Philadelphia region should look to the nighttime skies this weekend as July's full moon not only will be shining brightly — it may have an usual color.

This month's full moon, called the Buck moon, will reach its fullest phase at 10:37 p.m. Friday, according to the Farmers Almanac. It also will be 100% full Saturday night before a slight drop to 97% on Sunday night.

The moon could look red or orange if smoke from the wildfires in Canada and Oregon continues its drift across the East Coast. The smoke was responsible for the hazy skies that overtook the Philly region earlier this week. It arrived via upper-atmosphere winds, and was stacked in a two-mile layer at least five miles above the surface.

On Friday, the moon will rise in the east-southeastern sky over Philadelphia around 8:34 p.m. It will appear at 9:19 p.m. Saturday and 9:55 p.m. Sunday, according to the Farmer's Almanac.

No, the Buck moon's name is not a tribute to the Milwaukee Bucks winning their first NBA championship in 50 years earlier this week. The name is meant to signify the time of year when bucks grow new antlers on their heads.

The Buck moon often is referred to as the Thunder moon and Hay moon, too. The thunder attribute comes from the thunderstorms that frequently occur during the summer. Farmers also cut and cure hay at this time of the year, stocking up for the winter.

Full moon names date to Native American tribes as a means to keeping track of the four seasons, according to the Farmers Almanac. There may be some variation in names, but for the most part, titles are fairly consistent among regional tribes.