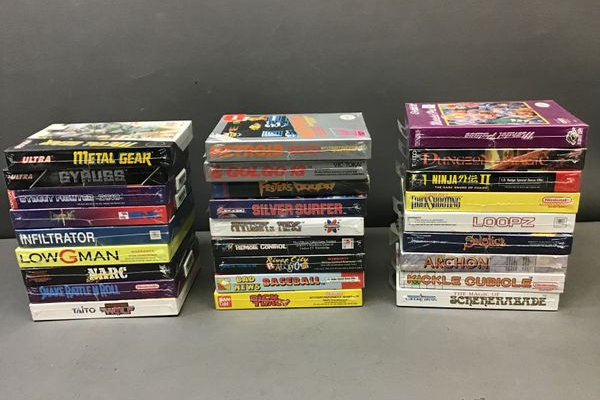 These 27 sealed, vintage Nintendo games that were donated to Goodwill Keystone Area sold at auction for $30,000.

Before making a donation to Goodwill, or any thrift store, for that matter, it's always a good idea to take stock of what your goods may be worth.

A recent video game donation made to a Pennsylvania Goodwill store ended up bidding at auction for $30,000, from an initial bid of just $9.99.

Goodwill Keystone Area's Hanover store received a donation of a brand-new Nintendo game console and 27 vintage game cartridges that were still in their original packaging, in mint condition.

Donated services representative Nichole Garcia had a hunch that the console and games could be pretty valuable.

“My brother-in-law sells collectible items and knows about Nintendo systems and games,” Garcia said. “I’ve picked up a thing or two from him and thought these cartridges would be of interest. When they were posted to our shopgoodwill.com site, I sent him a link. He thought they would sell for well over $10,000. I had no idea the final bid would land where it did, but was thrilled.”

Some of the games in the bundle included Nintendo classics like "Metal Gear," "Bad News Baseball" and "Infiltrator."

The cartridge package is the highest selling item of any merchandise that Goodwill Keystone Area has placed for auction.

Vintage video games — especially those packaged in mint condition — have increasingly become prized items at auction. The recent sale of a sealed copy of "Super Mario 64" for more than $1.5 million was so eye-popping that even experts were baffled by the game's value, considering it's the best-selling title for Nintendo 64 and isn't exceptionally rare, even in that condition. Some video game fans have speculated the sale was part of a money laundering conspiracy.

Concerns about Goodwill's labor and business practices aside, those in possession of vintage video games should take some time to do research about their value before jettisoning them. They may not land $30,000 in a bundle, but there seems to be high demand for classic games in working condition.