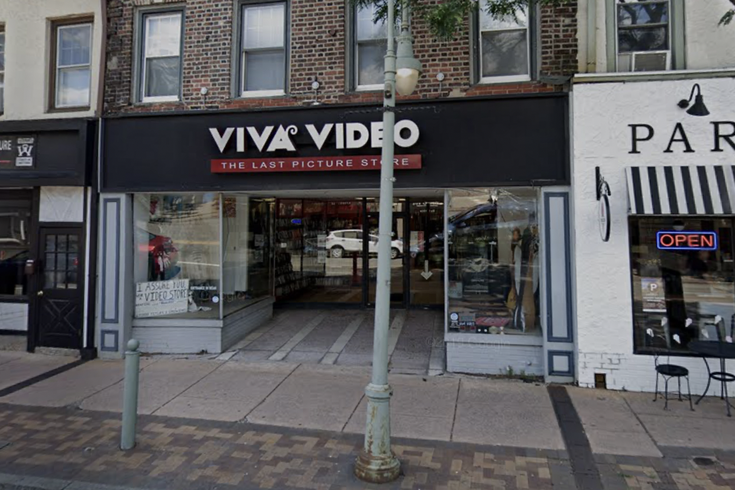 Viva Video will permanently close its storefront at 16 W. Lancaster Avenue in Ardmore after a nine-year run. It's the last video rental store in the Philadelphia area.

The demise of video rental stores has been a long and agonizing march over the last two decades, making the nostalgic sting more potent while elevating appreciation for the few remaining businesses that have carried the torch.

The Philadelphia area will say goodbye to its last haven for movie rentals this summer with the pending closure of Viva Video! The Last Picture Store, which has occupied space at 16 W. Lancaster Ave. in Ardmore since 2012.

The store shared a heartfelt message on Instagram about the decision to close up shop. The business had been leasing month-to-month and simply couldn't afford the amount that another tenant was willing to pay for the space, owner Miguel Gomez told PhillyVoice.

"Our run has been unlikely, wonderful, hard, emotional and unique," Viva Video's Instagram post said, thanking customers for creating a sense of community among film enthusiasts. "This has always been more than just a business for us, and the way so many of you have contributed to this wonderful cinematic community has proven we've been more than a business to you. You kept us vital. You kept us engaged. You made us want to live up to what you deserved. You kept us alive, and we remain eternally grateful for your contributions, your persistence, and your friendship."

The store will remain open for rentals through the month of July before selling off much of its collection of nearly 20,000 films — some of them quite rare DVDs and Blu-rays.

"We've got a ton of stuff — and some stuff that's worth hundreds of dollars," Gomez said. "There will be some pricing tiers. A lot of stuff will just be clearance to get rid of it. Some of our foreign and late night cult films and collectibles will not be priced at clearance, but it will still be a solid deal compared to buying online."

For the rest of July, at least, Viva Video plans to focus on screenings as the store says goodbye to its community.

"There's an alleyway next to our shop where we would project movies on the wall, and we're planning on doing a bunch, and letting each staff member have a night to make a pick and say goodbye to the community through a movie that they think is important to film history, or what their view of what's fun about cinema."

Gomez was cagey about his own picks, but said one could be a silent film with a live score that's not traditionally seen that way. Another might be a "doctored" action movie that he feels, tongue-in-cheek, might be a long-lost French detective film.

Gomez's adoration and knowledge of film history are infectious. He realizes his nine years owning Viva Video have been a special experience.

"Having a video store in this day and age is to some degree quite an indulgence," Gomez said. "I don't see any reason to not indulge my fancies to the last minute with somewhat off-the-wall screenings I want to do."

Gomez isn't kidding about the dying breed of the video rental store. Since 2000, they've dwindled from about 27,800 in the U.S. to fewer than 2,000, a number that will continue to fall with the closure of Family Video, the last remaining rental chain in the country. The Blockbusters and Hollywood Videos of the world have given way to the ubiquity of streaming platforms. Redbox's vending machines offer a pale reminder of what it once meant to browse for a physical copy of something to watch without owning it.

Even the birth of Viva Video was aided by the closure of other video stores, as Gomez was able to collect some of their rarities on sale. And some stores simply showed solidarity, like Baltimore's Video Americain, which operated for 30 years before its closure. Owner Barry Solan not only invited Gomez to help stock his budding Viva Video collection, but Solan's business also planted the seeds for the nonprofit, volunteer-run Beyond Video that has since bloomed in Baltimore.

"I actually got a ton of rarities from Video Americain," Gomez said. "They actually called me up when we were opening because they were so excited someone was going to open up a shop."

If someone else is going to take the mantle of Viva Video in the Philly area, they'll certainly have what's left of the industry cornered. Gomez wasn't aware of any other movie rental stores apart from Beyond Video, which actually operates more like a library.

"I don't know of any other," Gomez said.

The 42-year-old shop owner doubles as a nurse at Delaware County Memorial Hospital. One of the sad parts of Viva Video's closure is that he mostly had to keep away from the store during the coronavirus pandemic until he was vaccinated. He wanted to protect his staff from exposure to COVID-19, and Gomez said it's been years since he's taken a paycheck from Viva Video in order to ensure that it remained open while he supported himself with his career in medicine.

He said his experience as a nurse on the COVID floor during the pandemic has been brutal, but necessary work.

"It's as miserable as anybody else's experience," Gomez said. "It's heartbreaking, you know? I saw way more death than I signed up for and a lot of folks you just couldn't help. I've been a nurse for four years and I'm not a hospice nurse. It's not where my interests lie, but I feel like everybody has had to be a lot better at dealing with death.

"I've held the hands of folks with no family allowed to be there as they passed away. Death is sad, but the way everyone wasn't around their loved ones — that's rough. It's certainly traumatic in a lot of ways, but I felt I was doing something important and I'm glad I am doing it."

Viva Video plans to keep its social media channels active to "send transmissions" and possibly retain some kind of online community, potentially with a podcast if there's interest and organization behind it. For now, Gomez and his team are focused on the whirlwind of closing a business that has been alive for nearly a decade.

And with the pending closure, Gomez isn't yet sure how he'll channel his love of film in a post-Viva Video and post-pandemic world.

"That's one of the hardest parts for me. I'm at least a self-identified movie expert and the fact that I own a store lends me some air of authority, which has been really nice," Gomez said. "Not having that is going to be very strange for me. But Philly has got a lot of great film stuff that I've always enjoyed. Exhumed Films did awesome stuff. International House, when they were around, did awesome stuff. PhilaMOCA would do really cool stuff. I'll still plan to do those kinds of things."