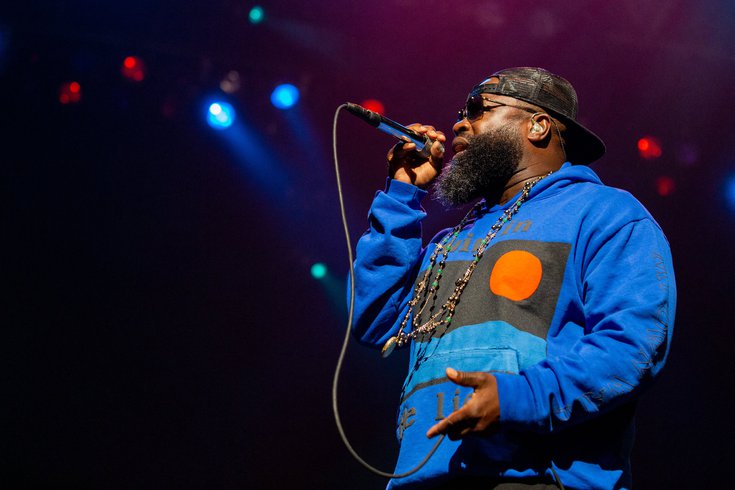 Tariq 'Black Thought' Trotter broke down his life — from his childhood in Philadelphia to co-founding The Roots with Questlove — in an audio story divided up into seven-year increments called '7 Years,' that was released July 8.

Tariq "Black Thought" Trotter has a theory that every seven years, we become entirely new people.

Literally, our body's cells all die and regenerate every seven to 10 years, but spiritually, creatively and professionally, we regenerate as well, he says.

Trotter broke down his life — from his childhood in Philadelphia to co-founding The Roots with Questlove — in seven-year increments in an audio story called "7 Years," that was part of Audible's Words + Music series.

"Sitting in this theory, my life has shifted in seven year cycles," Trotter said in the "7 Years" audio sample. "My catalyst years were ages 7-14, and then 21-28, and then again 35-42. I learned a lot about myself and the world around me."

Trotter's story, "7 Years," dives into those chunks of his life with a "powerful and personal" music score, Audible says. He starts things off with stories from his childhood growing up in Philadelphia — from the death of his father to burning his house down while playing with GI Joes and a lighter.

"Because what good is making believe when you can’t also melt the face off of your GI Joes when their tanker explodes in the imaginary war?" he said.

He told Metro Philly that the injustice and racism he faced as a Black child and teenager in Philadelphia are still present for today's youth.

"The justice system in Philadelphia and the state of Pennsylvania was never on my side. I grew up cognizant of certain dangers, one being the ever-present possibility of the risk of arrest," Trotter said. "But that hasn’t changed. All of the stuff I was concerned about living in Philadelphia when I was a young person to my young son, my young nephew, my young relatives and family member who’s on the streets of Philadelphia right now — they need to [be] concerned about the same stuff."

Trotter said he was one of "the lucky ones" who had a passion like the arts to get him through the hard times. Art was a way for him to express his thoughts and feelings he had trouble vocalizing.

Since January 2020, more than 820 people under the age of 21 have been injured or killed by gun violence in the city.

City councilmembers and community activists have pushed for more funding and resources to be set aside for youth violence prevention, like more job opportunities and funneling resources to Philly schools most impacted by gun violence.

Through "7 Years," Trotter said he hopes to show people the scope of Black identity.

He took a "deep, emotional dive" and relived forgotten experiences to create the nearly two-hour audiobook. He said the project was cathartic for him and hopes it is relatable for listeners. He said people tend to remember certain times in their lives through songs, creating a soundtrack of a given time.

"When we recall, when we go down memory lane and remember life’s experiences, for many of us, we almost remember these experiences through song," Trotter said. "We have these memories in our head, these beats and moments in time that you never sort of access."

He said strong storytelling is what makes a piece of art great, whether it's a visual, audio or sensory experience.

"Audible’s Words + Music programming has exceeded our expectations in so many ways and we are just getting started," Rachel Ghiazza, Audible’s executive vice president, head of U.S. content, said in a statement to Rolling Stone. "These extraordinary musicians have always had a special connection with their fans through their music. By weaving narrative storytelling into their work, they are creating truly unparalleled stories for our listeners. Our starting lineup in 2021 will offer something for everyone, from hip-hop to classical to rock and blues."