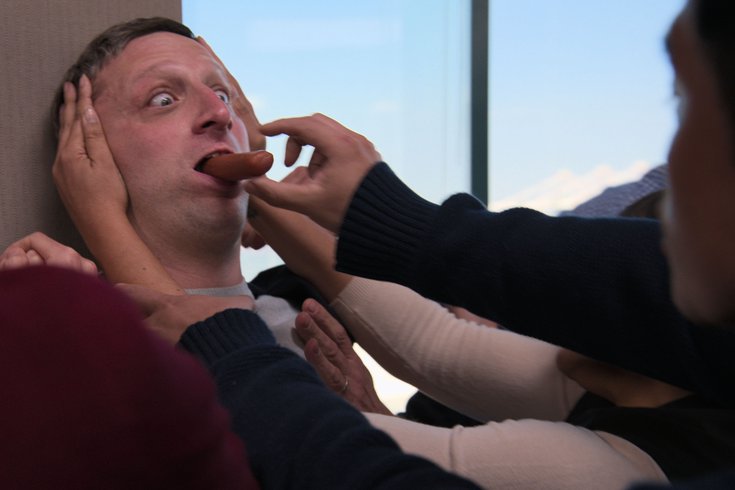 Tim Robinson doesn't want to skip lunch in Season 2 of "I Think You Should Leave."

"You thought it was funny," a producer says in Tim Robinson's ear during a prank-show parody in the opening episode of I Think You Should Leave's second season. "I thought it was interesting," Robinson replies, deep in a moment of existential dread as he contemplates stealing a stranger's lunch while struggling to breathe in a comically overdone prosthetic suit.

That contrast is at the heart of Season 2 of I Think You Should Leave, the uproarious comedy whose still screens have given the show a secondary purpose as a meme factory since its Spring 2019 release.

Season 2 is not only more outlandish, it relies on premises that are more hyper-specific than ever. The season opens with Robinson miffed about having to interrupt lunch in order to attend an emergency meeting — "You can't skip lunch!" — which transforms into a multi-episode arc necessitating the invention of a hot dog vacuum. Santa Claus stars in a bloody, John Wick-esque action movie in Episode 3, eventually going on a press tour for the film and telling a confused reporter that Santa's powers allow him (or perhaps force him) to see all of Earth's citizens bare-assed to determine their standing on the Naughty or Nice scale.

Save for the closing sketch in each episode, which tends to be longer and more elaborate than its predecessors, Robinson and a talented cast of co-conspirators fly through premises at warp speed. Sam Richardson returns to host an even more ridiculous child pageant this time around, Conor O'Malley's presence denotes chaos every time he is on screen, and Patti Harrison forces a driver's ed class to consider how a person's stated occupation could simply be, "tables." A cameo from Bob Odenkirk, whose career took a more serious turn in the two decades since he co-hosted Mr. Show, is terrific (if somber) and one of the highlights of the season.

The speed with which the season flies by, though, can be an issue. Another point of distinction between ITYSL and the likes of, for example, Chappelle's Show, is that the former's sketches receive no introduction. There's a perfectly good argument for trimming the fat and focusing on what people are here for, the sketches, but it can have a dizzying effect as Robinson and Co. bounce from one premise to the next, the episodes only running around 16 minutes each. And, like in Season 1, there are only six of them, allowing you to polish off the entire season in less than two hours if you're so inclined.

That ended up having a slow-burn effect for the first season, with fans coming to treasure each individual sketch over time because there were only so many to choose from. It does increase the importance of the individual pieces of each episode, though, with each sketch a decent chunk of the total offering here.

On an initial watch, Season 2 feels slightly duller than its predecessor, in part because it seems to focus less on purely comedic moments. There are still plenty of those — the ghost house sketch to close Episode 1 is outrageously funny, and Richardson pointing at a child and saying, "Look at this little brick shithouse" had me in stitches on a first watch. But several lengthy bits start with laughs and spiral into uncomfortable awkwardness, and some receive follow-up treatment that feels gratuitous based on the merit of the initial sketch. It's a season that contains less wall-to-wall laughter, ruminating on subjects like whether a baby believes a bad person can eventually change, and what happens when a man makes a joke at his wife's expense but doesn't really mean it.

It is, however, almost certainly worth your time, and still packed with laugh-out-loud moments. Coffin Flop, a show-within-the-show documenting cheap coffins giving out underneath dead people, is a TV premise so unbelievable it feels inevitable that it will one day come to fruition. At its core, I Think You Should Leave is still not that far removed from the world we actually live in,  as it dares to wonder what would happen if the answer to sarcastically asking a stranger, "Do you know how to drive?" was a simple, "No."

The binge model prevents ITYSL from having a cultural, water cooler moment a la, "I'm Rick James, bitch!" and it's fair to question whether a season whose best gag centers around ghosts ejaculating could ever have such a lofty place in the comedic pantheon in the first place. I Think You Should Leave is at times too absurd to keep the attention of a mass audience.

But the people it works for will undoubtedly find a lot to love in Season 2, ready to fight to the death for a Dan Flashes shirt to eat a sloppy steak or two in. The ITYSL meme economy will churn out new additions in the months to come, so you might as well get a head start and give Season 2 a spin.