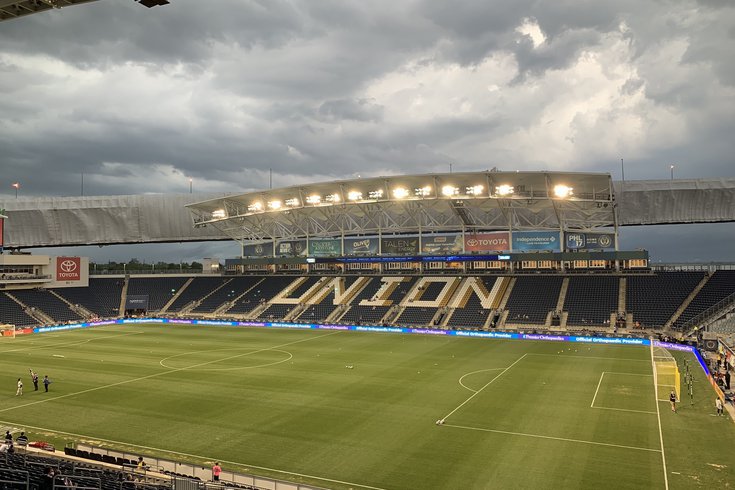 The Philadelphia Union will host Wrexham AFC at Subaru Park in Chester, Pennsylvania on July 29, 2021. Rob McElhenney and Ryan Reynolds own the club from Wales. The free game will be a food drive for CORA Services and Philabundance. Guests will be required to bring a food item to donate.

When "It's Always Sunny in Philadelphia" creator Rob McElhenney joined forces with actor Ryan Reynolds to purchase a soccer team in Wales, the move came across as an intriguing but distant experiment.

Now fans in the Philadelphia area will have a chance to see Wrexham AFC in action against the Philadelphia Union. The club is traveling to Chester next month for a friendly match with the local MLS team at Subaru Park.

McElhenney made the announcement Friday during an appearance on the "Preston & Steve" show, explaining that admission to the event will be free except for one requirement: Everyone who attends must bring a food item to donate. The match is being presented in partnership with the nonprofits CORA Services and Philabundance.

The game will take place July 29 at a time still to be determined. McElhenney indicated it will likely be in the early evening.

"Rest assured it will be at an appropriate drinking time," McElhenney said.

Wrexham AFC is the third-oldest professional football club in the world.

The team formed in 1864 and plays in the National League, England's fifth tier of professional soccer.  Their home stadium, the Racecourse Ground, is the world's oldest international stadium that still hosts international games.

Wrexham AFC has shown signs of improvement in recent years – the club finished eighth out of 23 teams in the season that just ended – but they're still a far cry from their peak era in the late 1970s. Part of what makes McElhenney and Reynolds' ownership of the club interesting is that they're outsiders attempting to help rebuild and restore the club to international relevance. Not only that, but they're operating a formerly fan-owned team with an intensely loyal community around it.

"I am relatively new to soccer," McElhenney said Friday. "I really didn't get into it until the pandemic and was just watching old documentaries and old games and old YouTube videos. Of course, I have tons of friends involved in the sport – and really into it, especially internationally. But also a lot of friends who are into MLS ... I started getting into it and really, really loving it. I really thought, like, wow, if we can present it in the right way, I can get other people, other Americans who think it's boring or think it's just not for them, I think I can get them into it."

A press release on Wrexham's website said it is anticipated that the match against the Union will be the first time McElhenney and Reynolds will get to watch their team play live. Also will be Wrexham AFC first trip to play in the United States, and Welsh club will hold a five-day training game here, as well.

Last month, FX announced that McElhenney and Reynolds' ownership experience will be followed in a documentary series called, "Welcome to Wrexham."

"Rob and Ryan will take fans inside the sport as never before, pairing their genuine love for the game with the welcome challenge of building on the heritage of this club," said Nick Grad, president of original programming at FX Entertainment.

A timeline for the series has not yet been announced, but there's good chance there will be cameras rolling at Subaru Park when they come to town next month.