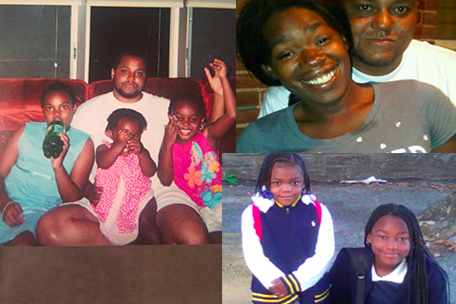 Photos show the family of Michael Thompson Jr., who was fatally shot outside his home in the Hunting Park section of Philadlephia.

An online fundraiser has been launched to raise financial support for the family of a Philadelphia man fatally shot in late September.

Michael Thompson Jr., 42, died Sept. 29 after being shot outside his home in the city's Hunting Park neighborhood. He left behind nine children and a fiancee, Michelle, who are struggling to make ends meets.

The Gun Violence Survivors Foundation, a Montgomery County-based nonprofit, has set up 529 Savings Plans to help cover the tuition costs for three of his children. It also is accepting donations to cover household bills and related expenses.

Thompson was shot multiple times after he confronted an ex-offender who had assaulted Thompson's fiance after sleeping on the family's porch, according to the Gun Violence Survivors Foundation.

Gary Saunders, 28, also of Hunting Park, was charged with Thompson's murder. Police have not released a motive.

Christopher Hayes, founder of the Gun Violence Survivors Foundation, has met with the Thompson family to assess their needs and film a brief video that accompanies the fundraising page. The foundation already has provided the family with two months of rent, Hayes said.

The foundation set a $10,000 goal for the fundraiser. But with two children already enrolled at The Community College of Philadelphia, and a third seeking to attend college next fall, Hayes says more funding would be helpful. To date, the fundraiser has raised nearly $3,000.

Hayes described the Thompson family as close-knit, a sentiment Thompson's father echoed in the video. Michael Thompson Sr., who previously lost another child to a heart condition, tells viewers that the pain of losing a child never leaves.

"I see him in each of his children," Thompson says in the video. "He has three boys and six girls. They love me without even trying because I'm Pop Pop. He had a great relationship with his children. That's all that really mattered. He loved them and he took care of them. We're a good family. I wouldn't trade this family. Michael was a very big part of it. So, it's a loss that's felt by everybody."

The elder Thompson, who is nearing retirement, also says he is prepared to continue working to assist his family. He says he's strong enough to do so, but admits it was not a future he anticipated.

"It's not a job I expected to have to do," Thompson says. "I have to put Pop Pop back to Dad now. I sort of expected my son to take over for me, not me take over for him."

Founded in 2013, the Gun Violence Survivors Foundation provides resources and services to qualifying gun violence survivors and their families.