Yes, someone got a Gritty tattoo during the Furnace Party

Both the Philadelphia Flyers season and the Furnace Party have come and gone in 2019, but thanks to the lasting power of Gritty, they merged to create some lifelong souvenirs last weekend.

Meet Anna Ladd, who made her way down to The Electric Temple tattoo parlor on Saturday, drawn by the allure of its “steel furnace flash” art.

There, she decided to get a black-and-white piece of Gritty’s head emerging from a cement bucket – we figured most people would think Gritty was on Team Steel, but what do we know? – permanently tattooed on her right leg.

“If you didn’t get a Gritty tattoo at the steel furnace party, do you even live in Philadelphia?” is how the GrittyPhilly Instagram account shared this momentous news with its follower base.

Granted, Electric Temple was not alone in this mindset; Big City Tattoo down the block, and right across Girard from the lot itself, said they'd done a couple already by mid-afternoon on Saturday.

Still, we wanted to hear a little bit about what inspired this move, so we reached out to Ladd who happily broke it down for us on Monday night.

The 24-year-old from South Philadelphia, who works as a designer for the Kimmel Center, attended the festivities on her own.

In a fortuitous twist, she not only saw Electric Temple's "flash sheet" of Furnace Party inspired tattoos on Reddit in the days leading up to the event, but her tax refund arrived.

"I told myself at that point that I'm going to get a Gritty tattoo on Steel Furnace Day," Ladd said. 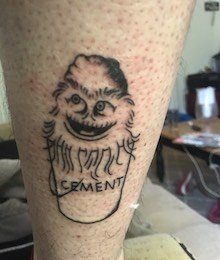 Anna Ladd got this tattoo which brought Gritty and the Furnace Party together.

So, after going to 27th and Girard for the dramatic noon reading of the flyer that turned into a viral-buzz sensation, "and watching people drink on the lawn," she walked down to Electric Temple,  paid $100 and, voila, had her Gritty ink within 20 minutes courtesy of artist Chanda Taylor.

"I was sober, I'll tell you that," said Ladd, who said it was her eighth or ninth tattoo. "I think with your first tattoo, you think really hard about it. From there, it's about when you have extra money. I was looking for an excuse to get a Gritty tattoo, and this is how it came to be."

While she was getting inked, Ladd said someone else came in saying they wanted to get "Do attend" tattooed on their butt, but never returned. (This person apparently also went into Big City down the block with a similar proposal.)

Laughing as she thought back to the day, she said the reaction has been positive.

"The internet seemed to like it. My mom hasn't commented on it yet, which means she probably likes it, too," she said. "This wasn't a very well thought-out decision, obviously, but it was a momentous occasion."