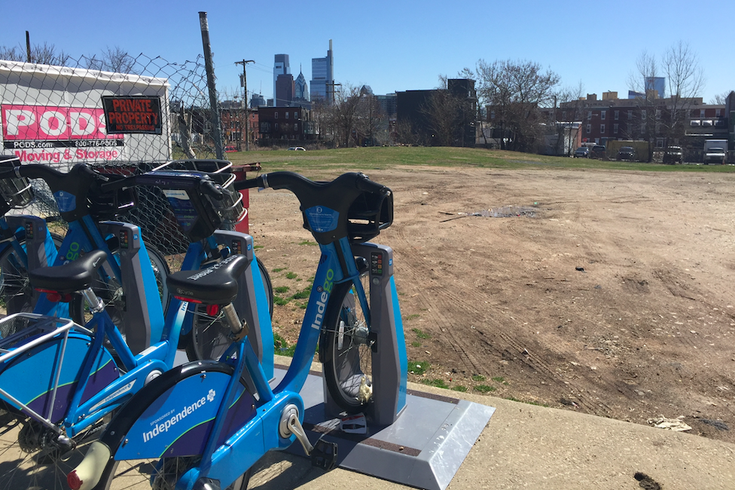 All as quiet at the 27th Street and Girard Avenue lot in Brewerytown, but what will this scene look like on April 27, the day of the 'steel furnace' party?

Just over two months ago, the buzziest story in the Greater Philadelphia region was the “steel furnace letter” passed out to homes and businesses in the area straddling the line between Brewerytown and Fairmount.

It was quite a confounding time to be alive. Well, guess what: the Furnace Party date – Saturday, April 27 – is just about upon us.

Should folks take the #DoAttend advice to heart, we might be looking at quite a gathering at the 27th and Girard vacant lot that day.

That, of course, is the location deemed by the leafleteer as the perfect place to build a steel furnace to facilitate people turning themselves into statues, thus negating the effects of all the food they’ve eaten since the first grade still being alive inside them. (We think we have that right.)

Having seen the widespread attention prompted by the flyers – a breakdown of which you can see via this link – we here at PhillyVoice decided the time was right to compile a Furnace Party Guide to help attendees better get to know the area around the vacant lot, plus how to get there and assorted other details.

With no further ado, a guide to the upcoming Furnace Party…

WHAT: The Furnace Party

WHO: People in Brewerytown and Fairmount received official invites, but it is generally considered an open event

WHEN: Saturday, April 27 at noon

WHERE: The vacant lot at 27th Street and Girard Avenue in Brewerytown

HOW CAN I GET THERE?

Obviously, you could walk, bicycle, drive or hop in a cab, Uber or Lyft to get there. SEPTA has numerous bus (and trolley) routes that can get you there, too.

Flying into town from overseas or across the country? Well, if you're coming to town through Philadelphia International Airport, you can hop on the Regional Rail's Airport Line, and get off at either 30th Street or Suburban stations. If you choose the former, it's a three-mile cab or rideshare lift to 27th and Girard. If you choose the latter, read below for the bus routes that will take you from Center City to Brewerytown.

Taking the train? Alas, no Regional Rail lines stop anywhere near Fairmount or Brewerytown. So, your best bet is Amtrak to 30th Street Station and then hopping an Uber, Lyft or cab. If you are coming in via SEPTA Regional Rail, you can de-train at Jefferson or Suburban stations and hop the bus from there. PATCO Speedline? Get off at the 12th/13th or 15th/16th and Locust, walk a couple blocks to Broad Street, and hop on one of the bus routes below.

Route 7: Starting in South Philly, this route takes you directly to the corner of 27th and Girard. Starting at 33rd and Dauphin, it’ll drop you off two blocks away at 29th and Girard.

Route 15 (Girard Avenue) Trolley: This is your best way to head in from West Philadelphia (63rd and Girard) from the west and Fishtown, Northern Liberties and the like from the east (near Sugarhouse Casino). Also, if you hop off the Broad Street Line at the Girard Station, the trolley stops right there.

Route 32: Starting in Roxborough or Broad and Carpenter in South Philly, this bus will drop you off at 27th and Poplar.

Route 48: Heading in from Old City, Chinatown or Center City? This bus will get you to 27th and Poplar from anywhere along Arch Street. From 27th and Allegheny, you can get to 29th and Poplar.

The bus routes – 7, 32 and 48 – are also accessible from near City Hall and Jefferson and Suburban Regional Rail stations.

Indego bikes: Folks, there's an Indego station right next to the lot. So, pedaling to and fro the party is a viable option. 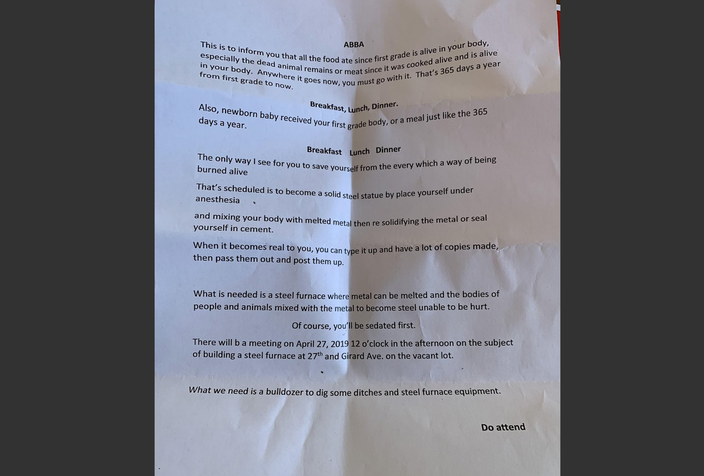 The “steel furnace letter” that was circulating around the Fairmount neighborhood has gone viral on Reddit.

IF I DRIVE, WHAT’S THE PARKING SITUATION?

Well, you could do that.

The neighboring areas of Fairmount are notoriously parking unfriendly, but it’s a bit easier to find spaces on the Brewerytown side of Poplar and Girard.

As far as metered spots along Girard, Philadelphia Parking Authority spokesman Marty O’Rourke said the PPA doesn’t currently have any extra enforcement plans for 27th and Girard that day.

"Speaking as someone who has not eaten any dead animal meat since 1983, the PPA does not currently have any plans to alter its enforcement protocols on the 2700 block of Girard Avenue that day," he said. “If you ‘do attend,’ the usual on-street parking fee of $1 per hour, with a two-hour limit, will apply between 10 a.m. and 6 p.m."

It’s private property, with fencing along the perimeter, but that hasn’t stopped contractors working on nearby properties from parking there. It also didn’t prevent the installation of an ABBA sign on the premises (but it wasn't there a couple weeks later.)

Side note: the owners never got back in touch with us for a previous story about the flyer, so maybe they have a plan in the works to prevent people from turning themselves into statues.

Be forewarned: while there is an opening in the fencing on the Girard Avenue sign, there are several "Private Property: No Trespassing" signs scattered about, one of which is upside-down, which is fitting. 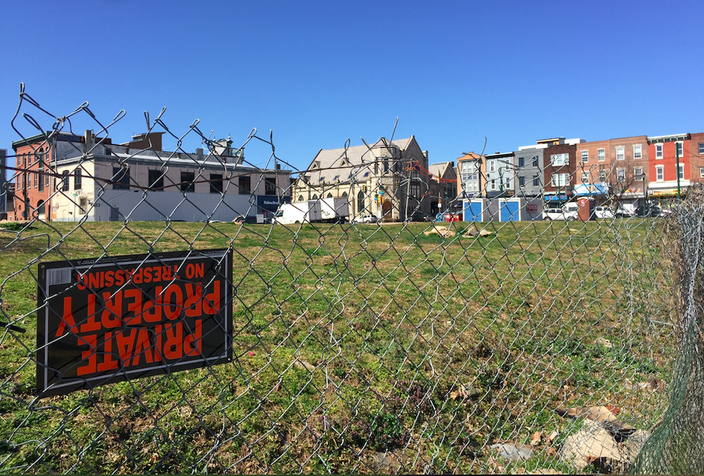 Will the 'No Trespassing' signs be honored on the day of the Furnace Party?

Saturday's forecast look perfect for a Furnace Party goes down. According to Weather.com, the sun will be out, temperatures close to perfect with a high of 65 degrees, low humidity and zero percent chance of precipitation.

One possible unpleasantry, however: a wind blowing out of the west at about 19 miles per hour could kick up some of that dirt on the vacant lot. But we're not complaining.

The potential for greater warmth, of course, depends on the number of pop-up furnaces.

WILL THERE BE A POLICE PRESENCE?

The department is playing it by ear, apparently. It knows about the flyer and continues to keep an eye on things.

“We’re aware of the social media chatter centered around the ‘Furnace Party’ and may allocate assets if warranted,” said Sgt. Eric Gripp, a spokesman for the department.

Of note: if you get pinched for an open container in public, you'll likely just get a ticket unless you get disorderly (and if you get disorderly, you'll spend party day, night and next morning in custody. Also, thanks to decriminalization, you could face a $25 fine for minor marijuana possession and $100 levy for smoking.

So, stay woke, drinkies and druggies.

IS THE FIRE DEPARTMENT ALSO ON STANDBY?

Yes! Of course they are!

"The Fire Department is aware of the event," said department spokesperson Kathy Matheson, "and will respond if necessary."

WHAT ARE THE RULES ABOUT OPEN FIRES?

Karen Guss of L+I shared an interpretation of the City Code's position on “portable outdoor fireplaces.”

“Open burning” – like, say, a steel furnace – is prohibited via the Fire Code “except by approval.” (Which the event itself currently lacks.) Open fires, but for barbeques, are prohibited under the Air Management code, as well.

• Portable outdoor fireplaces designed to burn combustible materials shall use an appropriate type of fuel such as charcoal, fireplace logs or non-pressure-treated wood.

• Portable outdoor fireplaces shall be at least 15 feet from a structure, including decks and balconies.

• Portable outdoor fireplaces shall be constantly attended until the fire is extinguished.

ARE THERE NEARBY BARS AND RESTAURANTS?

Yes, quite a few.

Besides the cultural aesthetic along the Ben Franklin Parkway (for example, that art museum behind a statue of a noted fictional boxer and the nearby Barnes Museum, etc.), Eastern State Penitentiary is a 20-minute walk to the southeast.

Near 20th and Fairmount, there are a slew of restaurants (Visit Philly lists a bunch of them via this link) and bars (Bishop's Collar, London Grill and several more) near that attraction.

But, you'll probably want to stay closer to the festivities, right? Well, Crime and Punishment Brewing Co. is right! across! Girard! Avenue! from the lot. Wait. There's more: the owners are brewing a https://www.phillyvoice.com/furnace-party-special-do-attend-beer-crime-and-punishment-brewerytown/special Jalapeno double IPA called "Do Attend" and donating a 10 percent of the proceeds to Minds Matter Philadelphia.

A mere three blocks away is Krupa's Tavern, a tiny, cozy taproom at the corner of 27th and Brown. (The owner told us a couple weeks ago that she'd probably open up early on Party Day, as well.) They have cheap drinks, and takeout.

Oh, there's also an Aldi supermarket right next door to the State Store.

WHAT ELSE IS AROUND THERE? (ATTRACTIONS)

Despite the aforementioned penitentiary and museums, the Philadelphia Zoo is just seven walking or trolley blocks to the west. (Imagine the view of the Furnace Party from the Zoo Balloon!)

The Strawberry Green Driving Range and Sedgley Woods Disc Golf course are but a short walk away near 33rd and Oxford in Strawberry Mansion. Bringing the kids? The Smith Memorial Playground and Playhouse is right next to that disc-golf course, as well. You can also pay homage to jazz legend John Coltrane at his National Historical Landmark former home at 1511 N. 33rd St.

Looking to get a lifelong souvenir to commemorate the day? Big City Tattoo Studio is located directly across Girard from the lot, and Electric Temple Tattoo sits two blocks to the west. Both tell PhillyVoice they'll be accepting walk-ins that glorious day.

"So pumped to see what this thing on the 27th is all about," wrote the person who handles Facebook inquiries for The Electric Temple.

What, just showing up for the Furnace Party at noon and letting whatever may unfold unfold in its due course just isn't enough for you?

Well, Facebook offers both a "steel furnace meetup" and an "anti-Furnace protest" for your perusal. Also, there's a Furness Appreciation Rally to honor "prolific and acclaimed architect" Frank Furness that day, and a "Do Attend: The Steel Furnace Drag Show" at Tattooed Mom the Thursday night prior.

Know of any other events? Hit us up in the comments or via email (subject line: Steel Furnace Event) so they can be added in to this important guide. 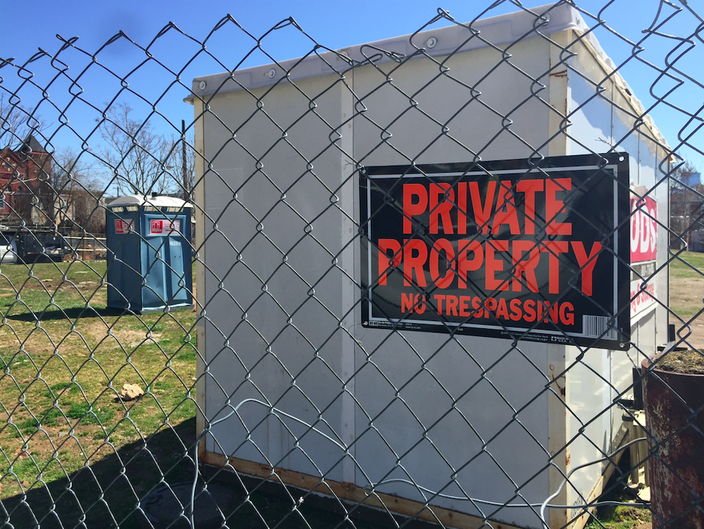 There is a single Port-o-Potty on the 'Furnace Party' lot.

We found no information indicating that the Port-o-Potties would be available in and around the site a la like-hearted festivals along the Ben Franklin Parkway. Perhaps we'll be pleasantly surprised. After all, there is a single Port-o-Potty on the property (oh, those lines.)

Public urination or defecation comes with a $300 fine. Otherwise, be a good patron and only ask to use the facilities at nearby businesses if you're a paying customer.

WHAT IS GOING TO HAPPEN?

Maybe it'll be like Woodstock '94 with the Green Day-fueled mud fight. Maybe it'll be a bust. Or maybe people will try to turn themselves into statues to get more clicks on Instagram. Things could go very south if it turns out to be some sort of Fyre Fest gimmick, though.

Honestly, nobody knows what is going to happen at the Furnace Party, and that mystery is part of the charm.

So, godspeed, Furnace Party goers. We'll see you there.