The viral Philly subreddit post has inspired memes, a party, a GoFundMe and now music 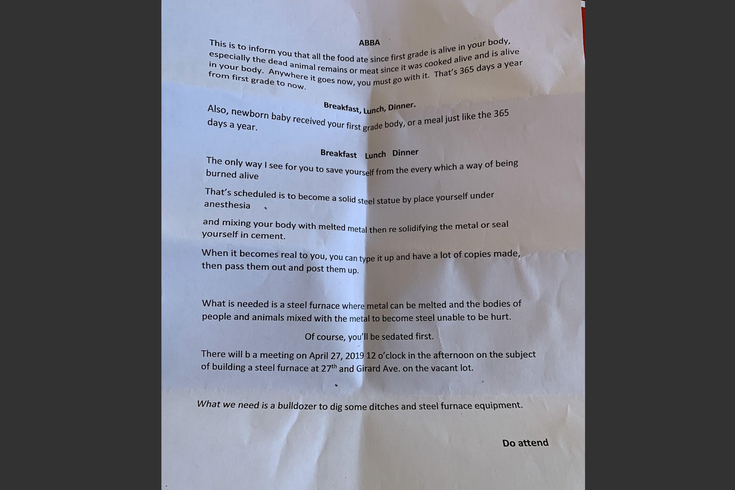 The "steel furnace letter" that was circulating around the Fairmount neighborhood has gone viral on Reddit.

The Philly subreddit is almost entirely dominated by the "steel furnace letter," which hit a viral, meme-worthy stride this week.

In fact, there's a new subreddit called r/FurnaceParty, there are many memes, a GoFundMe benefiting a mental health nonprofit, cartoons, an "official" website, and now ... songs.

If you have no idea what Philadelphia's steel furnace letter is, here are the basics:

Earlier this week, Reddit user siandresi posted a photo of a letter that had been distributed to homes in the Fairmount neighborhood. The rambling, ominous, one-page, typed letter is to "inform you that all the food you ate since first grade is alive in your body, especially the dead animal remains or meat since it was cooked alive ..." That includes "everything from first grade to now."

It goes on to say we can only save ourselves by "mixing your body with melted metal then re solidifying the metal." That's where the steel furnace comes into play – the letter informs residents there will be a meeting to discuss construction of the furnace on the empty lot at 27th Street and Girard Avenue on April 27.

If you need more info than that, or want to see many memes the furnace letter has spawned, check out Billy Penn's coverage from Tuesday.

Brad Podray is among the thousands who read the letter on Reddit.  He now lives in Des Moines, Iowa, but for 10 years, Podray lived at 23rd and Race streets. He also writes song parodies.

"I was in front of my computer and I thought, 'I’m gonna do something funny with this,'" he told PhillyVoice on Wednesday.

And thus, "THIS IS TO INFORM YOU" and "Wannabe Solid Steel" were born. The first is just Podray reading the furnace letter, set to a beat he made. After it got some traction on Reddit, he decided to  make a cover and, how he put it, "maybe I should put a little more effort into it?"

So, he covered the Spice Girls "Wannabe" and wrote some of his own lyrics.

Here's a verse: "Oh, what do you think about that/ Now you are solid steel/do attend the meeting, or you aren’t real./ Have copies made, I'll give you a try/ It's the only way to save yourself from being burned alive."

Podray has been writing song parodies since he was 16. He runs his own "pirate rap" troupe, Captain Dan and the Scurvy Crew. He's been making mostly electronic and rap, but Podray said soon he'll make his foray into pop.

And based on the traction of "Wannabe Solid Steel," he might release an ABBA-inspired cover that a friend suggested because the letter begins with "ABBA."

Update: The ABBA-inspired parody has been created by fellow song parody enthusiast Andrew Fiorentino. Here it is.

This story was updated after it was initially published.