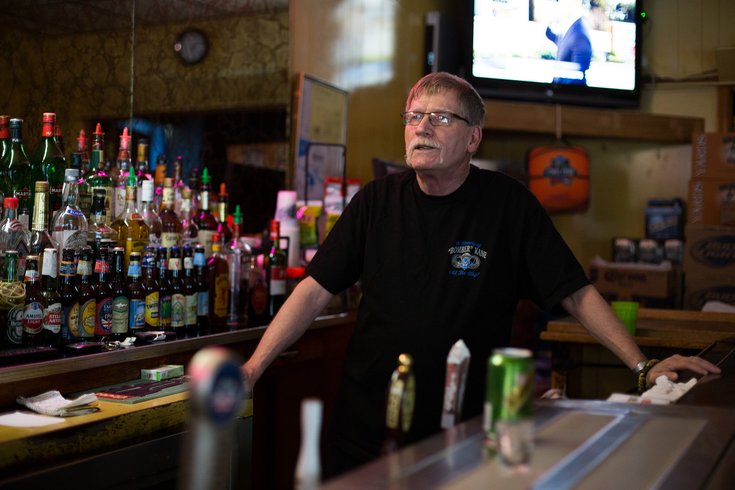 Bartender Joe Ferry, 69, of Fairmount, watches television at Krupa's Tavern at 27th and Brown on Wednesday, May 11, 2016. Ferry will retire Saturday, ending a 34-year career behind the bar at Krupa's.

The moment that Saturday night becomes Sunday morning, Joe Ferry’s 70th birthday will arrive. And when the clock strikes 2 a.m., the Vietnam vet who has tended bar in Fairmount for the past four decades will officially become a retiree.

The story of how Ferry became a beloved fixture at Krupa’s Tavern – 27th and Brown streets – starts back on Oct. 20, 1969. That was the day he returned stateside after a tour of duty brought about by draft letter from President Lyndon Johnson jumpstarted his U.S. Army service in the central highlands of Vietnam.

The Fairmount native/lifer was in Seattle with $3,000 in his pocket and a heady decision to make: There was one flight to Philadelphia and seven to Las Vegas, a place the then-23-year-old was acutely interested in seeing.

“I’d never been to Vegas, but I hadn’t been home for 14 months. I went up to the counter. They said there was one direct flight to Philly, so I said, ‘OK, put me on that,’” recalled Ferry at the VFW Parkway Memorial Post near 24th and Aspen streets earlier this week. “I’ve since learned that I love Vegas. I went there twice. If I’d have went there in ’69, I would’ve still been there drinking, gambling, up all night.”

"Bartending was a good life for me. I bought a house, a car, raised a family. It’s a good life.” - Joe Ferry, bartender, Krupa's Tavern

Instead, a few hours later, Ferry flew home, deplaned via runway stairway, gave his mother a kiss and took a cab to his sister’s house on 22nd Street, where the rest of the family awaited.

Over 3 a.m. quarts of Ortleib’s, the Roman Catholic High grad realized his time in the Army left him with a penchant for profanity that had never before existed.

“One night I was in O’Laps, 21st and Brown, and my brother-in-law Rebel White was working there. We were drinking and he says, ‘Get behind the bar.’ I said, ‘I don’t know how to bartend.’ He sat down and started drinking and I started bartending,” recalled Ferry of the erstwhile watering hole. “He said, ‘You know how to bartend. You start Friday night.’ He told me to just watch the money, and that’s what I did the rest of my time bartending.”

He’d work at O’Laps for the next dozen years, but when the place closed down, it was time to find a new gig. Another brother-in-law, affectionately remembered as “Hagie,” recruited him into the life of huckstering.

Ferry started by selling fruit and produce out of the back of a station wagon down near Westy’s tavern at 15th and Callowhill but later made his way onto Hagie’s truck. A friend then got to talking with Helen Hepp, proprietor of Krupa’s Tavern. She needed a bartender. Ferry was recommended.

“I’d worked in a rough bar. Younger crowd. We used to call Krupa’s an old-man’s bar,” Ferry said. “She says, ‘I don’t know if he’ll fit in here.’ My friend said ‘Yeah, he’ll fit in anywhere.’ … I went over there on a Wednesday and she said we have two rules: No cursing and our prices are cheap enough that there’s no free drinks. I said, ‘Yeah, I can live with that.’ They showed me what the prices were on the register and, that’s it, I started working.”

NOTHING BUT FOND MEMORIES

Working with that is what he’s done for the past three-and-a-half decades, with a 6 p.m.-to-close Wednesday shift (at the tail end of a day that started with huckstering till 5 p.m., which made for a demanding schedule until he focused solely on the bar shift) gradually expanding to Thursday, Friday, Saturday and a Sunday double, the latter of which he gave up seven years back.

He fondly recalls those early Sundays when a patron named Chuckie would bring in a black-and-white TV to place on the shuffleboard table so customers could watch both televised NFL games. (There was only one bar television at the time).

It was around that time that he’d make sandwiches for the customers, most notably one that started off as a Sloppy Joe, but evolved into a specialty called “Smokey Joes” courtesy of Chippy Geller who noted the hot-sausage flair. The crowds grew and a second television was installed, making Sundays a must-go neighborhood event. (It remains so for Eagles games to this day.)

“Bartending was my niche. I’d worked in factories before I went in the Army, and in the Army, you’re being told what to do, mostly by people who don’t know what they’re doing,” said the father of two (daughters Katie and Erin). His wife, Roe, is also retiring from her job with the city of Philadelphia in early June.

“When I got out and fell into bartending, I found out all you have to do is show up at work, the boss isn’t looking over your shoulder every hour,” he continued. “You do your job, and then you close up, lock the door and go home. No stress. No worries. It was a different job every night.” 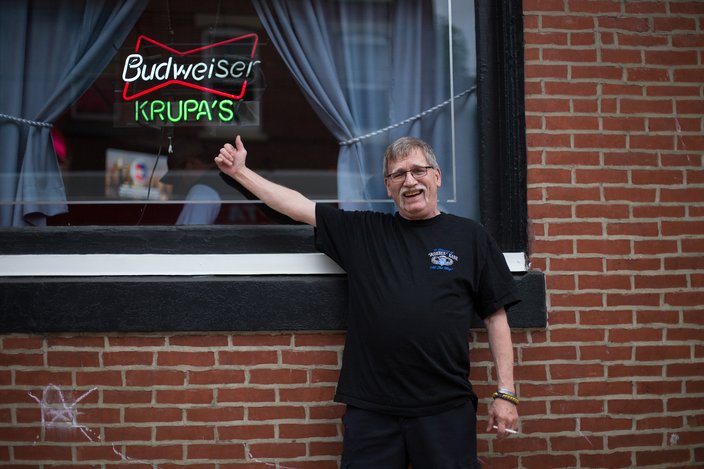 Asked for his favorite memories, he said there are too many to count, though the married couple who’d buy rounds for themselves and a friend at O’Laps, who would buy a round for himself only came to mind, as did taking guns off of people – including a guy who (allegedly) killed a cop killer – at various points early on in his career.

As for his retirement date, “I always said I was going to work till I die,” but he gave his two-year notice back in 2014.

Health issues factored into it, most notably Diabetes 2, which is Agent Orange-related, a mild stroke and a blockage that led to a coronary artery stent.

Ferry said his time in Vietnam “took me out of my comfort zone” by allowing him to see a world outside of Fairmount (and the occasional trip to the Jersey Shore). Despite the Hollywood depiction, “90 percent of us came back and got on with our lives.” That plays into how he's feeling on retirement eve.

“One day at a time. I’m happy because I’m alive. You woke up today, so it’s the best day of your life. Go out and be happy,” he said. In Vietnam, “You’re living day-to-day, seeing the hardships people face, but you come back here and you can do anything you set your mind to. You can always make a buck somewhere.”

On Saturday night, expect to see a big crowd of Fairmount residents old and new stopping by 27th and Brown to bid their longtime bartender good luck in retirement.

“I’ve been working all my life, always hustled, selling carnations on Mother’s Day outside St. Andrew’s Church [19th and Wallace], sold Christmas trees outside the 627 Bar across the street from St. Andrew’s, when I was younger,” he said. “I’ll miss the people, all the friends I made over the years. But as far as work, I worked night work, so I missed a lot of family functions.…

"I have no plans. Always said I’ll drink, gamble and travel, so I guess that’s my plan! Bartending was a good life for me. I bought a house, a car, raised a family. It’s a good life.”

When I moved to Fairmount 16 years ago, one of my first neighborhood staples was Krupa’s. It’s a longstanding, cozy corner taproom that offered a beer and a shot for $5 at the time, with an intriguing array of characters, and Joe Ferry is part of the reason why. 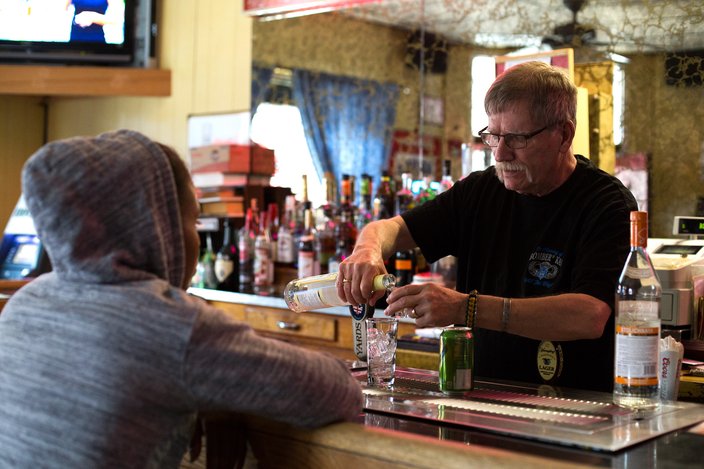 Bartender Joe Ferry, 69, of Fairmount, serves a regular customer of Krupa's Tavern at 27th and Brown on Wednesday, May 11, 2016. Ferry will retire Saturday, ending his 34-year career at Krupa's.

In anticipation of writing this story, I asked a handful of regulars for their favorite Ferry memories. Here’s what they said:

“When I first moved to Fairmount, my brother was in the Army, stationed at Ft. Bragg. He would come and visit on long weekends and we always went to Krupa's. As is his way, Joe was warm and interested, particularly in another soldier. When my brother was deployed to Iraq, Joe made sure to get his APO address and sent him care packages on the regular, a kind and much appreciated gesture. To me, that's Joe: A stand-up guy with a true sense of what's good and decent, with a commitment to his fellow service members.” – Brendan O’Rourke

“The night before Jon and I eloped, we stopped by Krupa’s for a late-night drink. We let Joe in on our secret and after the last customer left, Joe pulled the curtains, closed up early and treated us to celebratory drinks at the [Bishop’s] Collar. We've always called it our joint bachelor/ette party.” – Julie Malcarney

“One night a few years ago, a group of us was there and in walks a group of early 20-somethings. They start asking Joe all kinds of questions. What kind of beer do you have? So, he points at the bottles that are on display. What kind of draft beer? So he tells them. Do you have any specials? What are your specials? Without even thinking about it, Joe replies, ‘Our specials are’ and proceeds to tell them the regular prices of the beer. It was hilarious because the group of us that were there knew these were normal prices, but to a group of 20-something hipsters, these were such great deals for a bar in the city!

“Outside of the bar stories, I will also never forget how much Joe cares about and does for all of us. When I had to have surgery to have basil cell removed from my face, Joe was one of the first people to check on me and got me an aloe plant to help the scar heal. He used to come out every Saturday after working until 2 a.m. on Friday and before going back to the bar on Saturday night to cook for the football team. We still go to his house on Christmas night every year.” – Katie Botta

“The first day I moved into Fairmount, Katie and I had started moving into the Wagon Works around 8 a.m. on a Friday. We spent the better part of that day cleaning and moving things into our apartment. Around 4 p.m., I had finally had enough of the moving crap. I said to her, ‘There’s a bar across the street. I’m going to put this moving stuff to bed and get a few beers.’ She wanted to finish a few things up and said she would be over in about a half hour. I walk into the bar and it’s me and three really old gents. I saw the Phils were on the tube and thought why not. So I tell the bartender that I had just moved in across the street and thought I pop in for a few. He looked at me and shook my hand and said, ‘I’m Joe Ferry and I’ll be your bartender for as long as you live here.’” – Hank Kullman

“He’ll be missed by all the patrons and everybody at Krupa’s, some of whom have been here as long as he was.” – Elaine Hepp, owner, Krupa’s Tavern