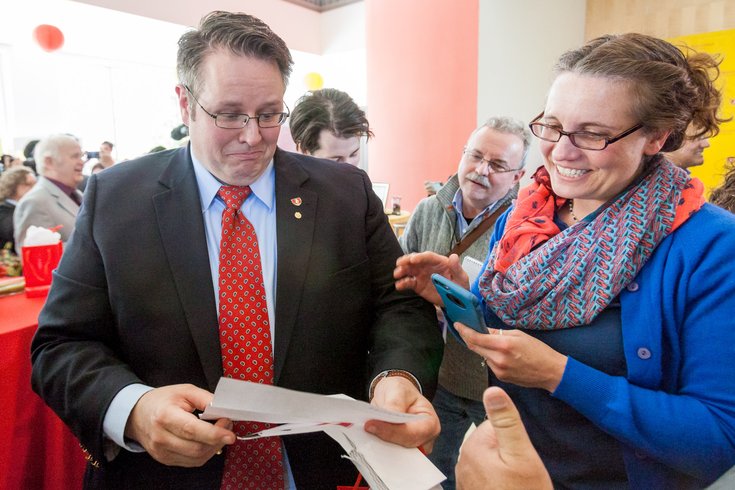 Brian McCauley opens his 'Match Day' envelope to learn he has been accepted into Brown University's internal medicine residency program, his first choice. His wife, Tammy, shares the moment with him.

Brian D. McCauley, one of 43 members of the inaugural class of Cooper Medical School of Rowan University, had the next three years of his life decided at noon Friday.

Friday is national Match Day, the day every medical doctor-to-be in the country from more than 150 med schools learned where he or she will finish training as a medical resident.

Soon-to-be Dr. McCauley – he graduates May 9 – opened an envelope and learned he will spend his residency at Brown University in Providence, Rhode Island, his top choice program.

“My colleagues are phenomenal. They are affable. They are normal people, but you can talk to them about serious things. They are unerringly good and they are perpetual optimists.” – Brian McCauley, 39, headed to Brown University

A tall, and large guy, McCauley was sought out by dozens of fellow students and instructors for one of his trademark bear hugs after learning their own fates. Several were hoisted above the floor in his joyful embrace. Perhaps that explains the humanism award he got last week.

"This is what medical school is all about. You can feel the heartbeat emanating out of it," he said as students cheered each other.

About securing his first choice, internal medicine at Brown, he beamed and said simply, "It's a privilege."

The man fellow students call "Dad," both for his age and for his mentoring, has maybe 25 or 30 years to pay off med school tuition bills of “more than $200,000 – the exact amount is disturbing,” he says. That's more than his home in Wallingford, Delaware County is worth.

He’d started off at the University of Scranton, but decided after two years that his “head wasn’t in the game.” He quit college, joined the Air Force, became a medic and served around the world for six years.

After his military service, McCauley took a job at the Hospital of the University of Pennsylvania, first working as a paramedic, then in the cardiac catheterization laboratory.

He also returned to college, eventually earning a master's degree in public health from Drexel University.

Married to a nurse, Tammy, whom he met at HUP, and with children now 11 and 7, busy McCauley managed to put in about 40 hours a month back at HUP while studying intensively for med school. He’d leave the med school in downtown Camden at noon, head directly to HUP at University City in Philadelphia most Fridays, also picking up a few fill-in hours now and then.

When McCauley decided on med school four years ago, he applied to five schools in the region and was accepted at several, but the new medical school in Camden’s downtown tugged at him.

“My colleagues are phenomenal. They are affable. They are normal people, but you can talk to them about serious things. They are unerringly good and they are perpetual optimists,” he said.

One of the things he appreciated most about the school was its requirement for community service in Camden’s neighborhoods. He spent his time as an academic tutor, especially preparing students for Brimm, the city’s medical arts and science magnet high school.

Getting prepared for Match Day was daunting.

He applied to 22 schools in the first go-around and was invited to 16 interviews, which he did between last October and January.

Meanwhile, his studies continued, he was on a care team at the hospital, and his father-in-law had a life-threatening medical scare.

“It was expensive, took a lot of time and was complete insanity,” he said of the match process.

Eventually, he was left with 10 programs on his list, decided by how he fit and the school’s demographics.

Right after the Brown University match was announced Friday, McCauley, his wife and parents headed to his favorite area restaurant, Max’s Seafood Café in Gloucester City.

He said he loves the food and atmosphere there, and it doesn’t hurt that the place is just a few blocks from the office of his mentor, Dr. Dan Hyman, the leader of the internal medicine program at Cooper University Hospital.

McCauley said he may return to work with Hyman after residency.