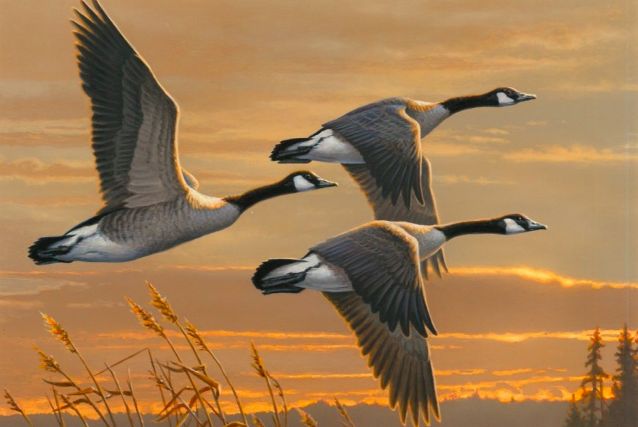 At first blush, you may not think this is all it's quacked up to be, but try telling that to a devoted philatelist, a wetlands hunter or a conservationist.

This weekend, the Academy of Natural Sciences hosted the 66th annual Federal Duck Stamp Contest, sponsored by the U.S. Fish & Wildlife Service. The museum was filled with 152 artist submissions from around the country, all vying for the privilege of a place in American conservation's past, present and future.

At stake for the government was an estimated $25 million in revenue for habitat protection efforts in federal wildlife refuges, such as the 1,000-acre John Heinz National Wildlife Refuge at Tinicum, which is located near Philadelphia International Airport and open to the public year-round.

After two grueling days of critical winnowing, the 2016 Federal Duck Stamp Contest winner is Jim Hautman, a wildlife artist based in Chaska, Minnesota. His painting of three Canada geese soaring across a sunset, uncanny and unintentional in its resemblance of the hallowed Wawa logo, will be featured on the U.S. Fish and Wildlife Service's 2017-2018 stamp.

"It means a lot to me," Hautman told PhillyVoice from Minnesota. "It's great to give back and protect the wetlands where I've been hunting with my brothers since I was a kid."

For a history lesson in advance of the contest, we spoke with Rachel Levin, spokeswoman for the federal duck stamp program.

"The program was created in 1934 in the midst of the dust bowl," said Levin. "Habitats were drying out at an alarming rate for fur ducks and geese, so hunters at the time wanted to ensure there would be funding to ensure the survival of these species."

That year, cartoonist and conservationist Jay N. "Ding" Darling drew the first federal duck stamp, a brush and ink drawing of mallards, as a means for the government to lease or acquire wetlands. At the time, Darling was chief of the Biological Survey, a contemporary precursor of the U.S. Fish & Wildlife Service. 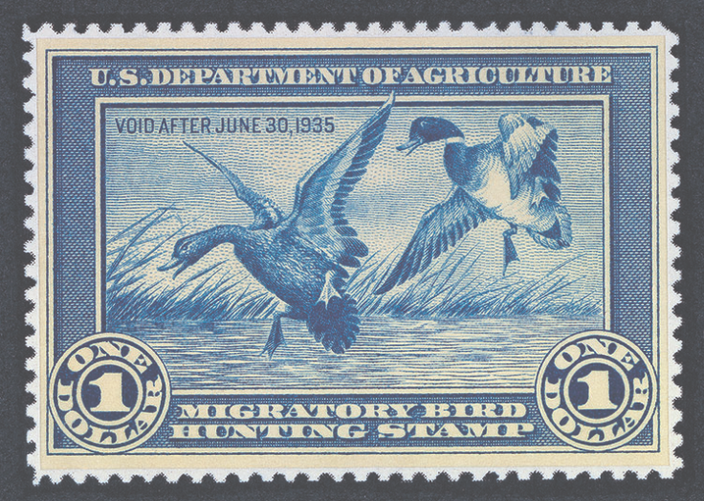 (Note: Scroll down to see more stamps below)

Duck stamps are revenue stamps, not normal postage, Levin explained. They cost $25 for a single stamp — they're more a collector's item than a way to send a letter — and 98 percent of those funds go directly to conservation efforts at hundreds of refuges around the country.

"My dad started collecting duck stamps in 1934," Hautman said. "He taught us all about the conservation program and would only take us to hunt on land that had been purchased using duck stamp dollars."

Until 1949, duck stamp artists were more or less directly commissioned by the U.S. Department of the Interior, which invited recognized artists to submit their work. A national contest, opened to the public in 1950, called on anyone over the age of 18 to submit a 7-10-inch drawing of one of five pre-selected species using their preferred medium. Ever since, those works have been judged by a rotating panel of five art, waterfowl and stamp authorities.

"Usually, it's acrylic, oil, mixed media and etchings," Levin said. "There's no preliminary judging or standard that rises to the top. The panel has general guidelines, but it's up to them. They look for reproducibility on a 1- to 1.5-inch stamp, accuracy of the duck and habitat and coloring and aesthetics."

This year's species were as follows:

Hautman's Canada goose marks his family's fifth victory in the Federal Duck Stamp Contest, which has had several repeat winners over the years. He and his brothers have previously been featured on stamps in 1990, 1992, 1998 and 2008.

"I've been painting North American wildlife for about 30 years," said Hautman, who seemed at least a little bit piqued by the Wawa connection. "There are a lot of Canada geese around here, so it's a species I'm familiar with and I've submitted them in the past. I do a lot of birds and waterfowl, but I also paint mammals."

What's Jim's prize? Not $25 million. That's for the birds. He'll receive a pane of 30 of his stamps signed by the Secretary of the Interior – currently Sally Jewell – and a mighty prominent place in avian-American history.

"This is the only federally mandated art contest that I know of, and certainly the most prestigious wildlife art contest," Levin said. "We hold it in Philadelphia because it really gives people the opportunity to get involved in nature in their backyards. Year after year, artists are very competitive and take it seriously. Collectors as well."

The prize? Not $25 million. That's for the birds. The winner gets a pane of 30 stamps signed by the Secretary of the Interior – currently Sally Jewell – and a mighty prominent place in American duck history.

This weekend's event, which offered free admission to the museum's general exhibits, welcomed plenty of youngsters to a special exhibit with three live birds and waterfowl artifacts held under the big T-rex fossil in the main dinosaur gallery. There were also arts and crafts, including stamp drawings for all ages, to introduce kids to the government's separate Junior Duck Stamp Contest.

"It's a terrific opportunity to be an eyewitness to history making," Levin said. "We really encourage people to buy duck stamps. It's an investment in our future and our kids' future."

P.s.: Below is a look through the decades at the winning duck stamps. Annual winners can be viewed at the Federal Duck Stamp Gallery. 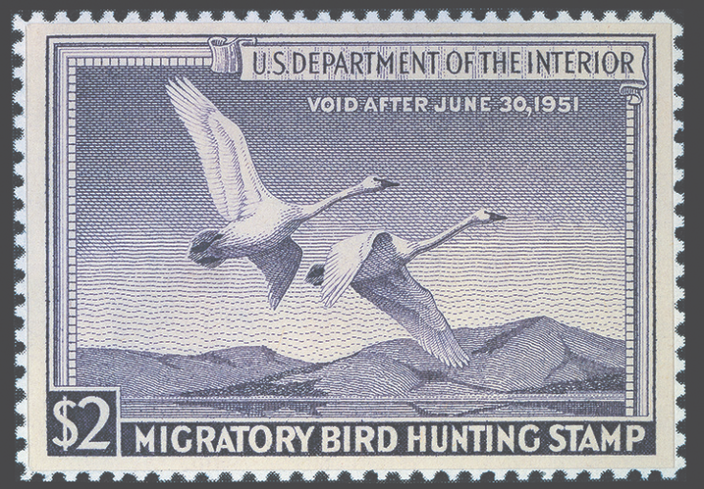 Black and white wash and gouache drawing of trumpeter swans by Walter A. Weber. 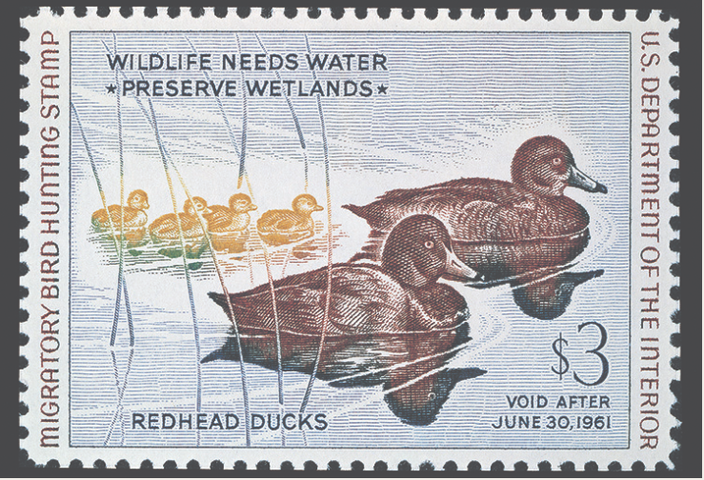 Black and white watercolor drawing of redheads by John A. Ruthven, of Georgetown, Ohio, winner of several lithographers awards. 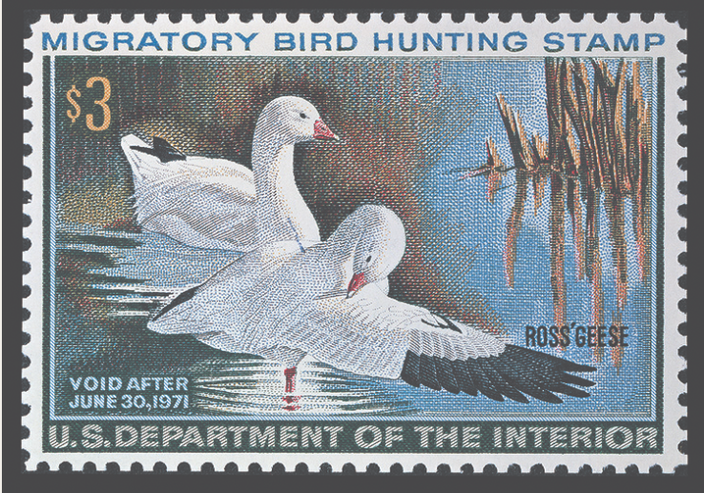 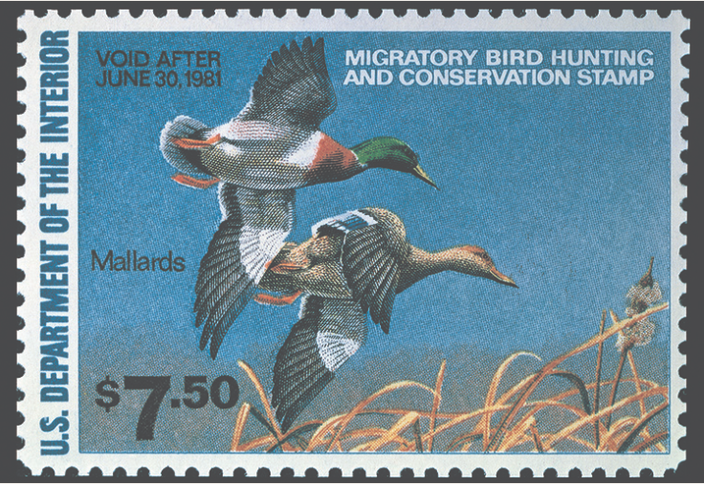 Acrylic painting of a pair of mallards in flight by Richard W. Plasschaert of Minnesota. 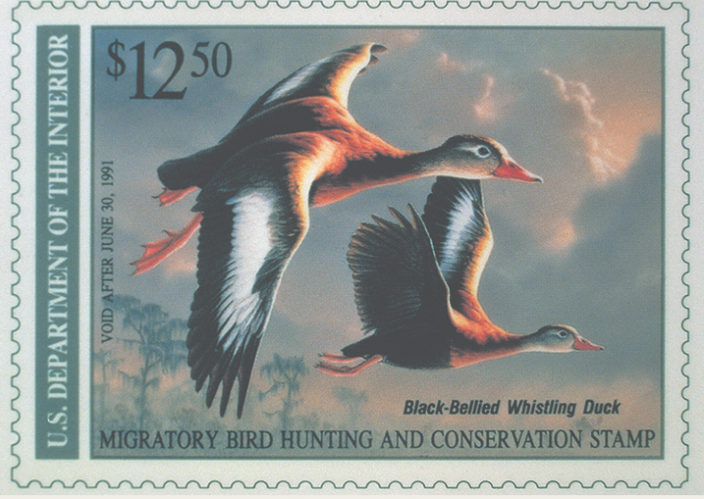 Acrylic painting of a pair of black-bellied whistling Ducks by James (Jim) Hautman of Chaska, Minnesota. 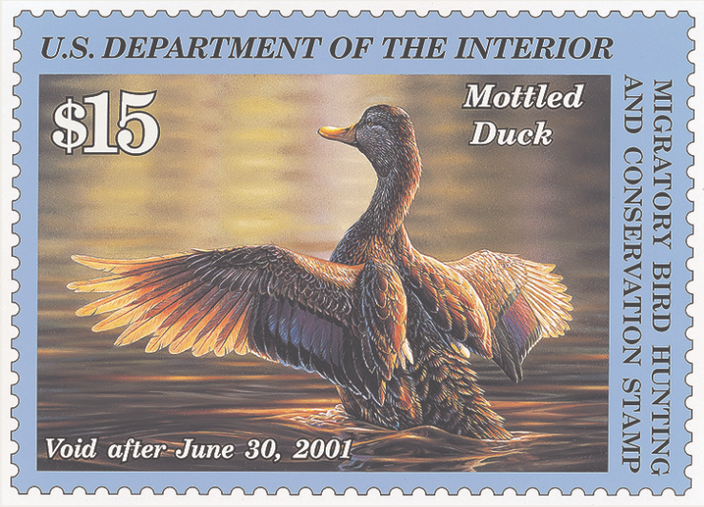 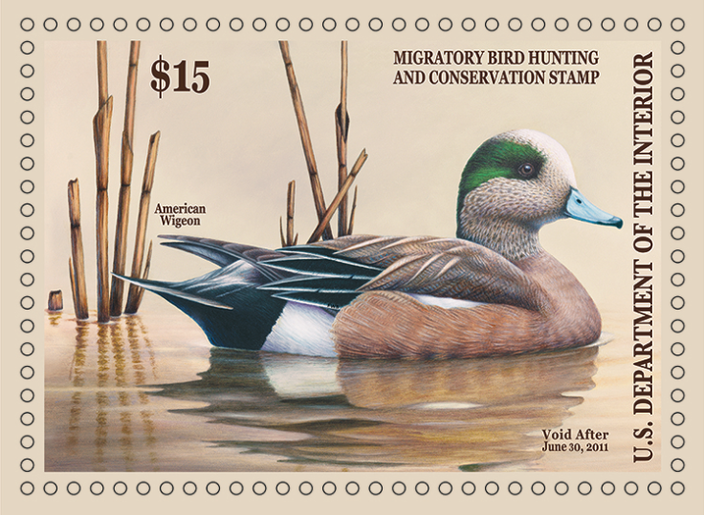 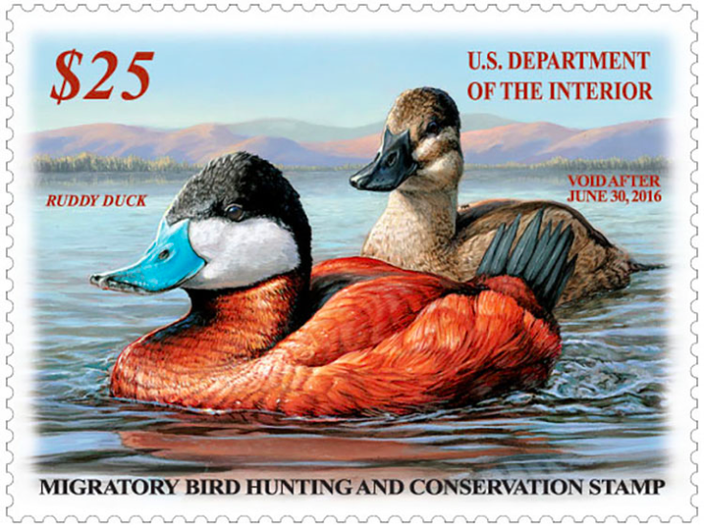