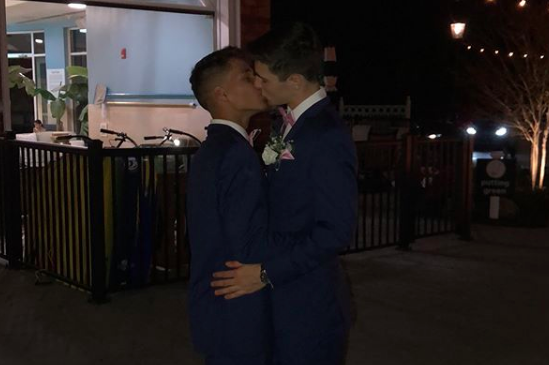 After their first prom together, two gay New Jersey teenagers were prepared for the worst when they heard a group yelling at them as they strolled the Seaside Heights boardwalk.

But to the surprise of Theodore Vidal, 17, and Colin Beyers, 18, they were embraced instead of insulted, and their story has since gone viral.

ABC News producer Michael Del Moro witnessed the exchange between prom dates Vidal and Beyers and a boisterous group gathered at a rooftop bar along the boardwalk. He shared what happened on Twitter.

Del Moro, who is gay, had been walking the boardwalk with his boyfriend and family Friday when he noticed a group of "rowdy bros" yelling "Kiss her!" at every prom couple who walked by.

When Del Moro saw Vidal and Beyers, he feared what would happen next. He said it's not uncommon to hear homophobic slurs hurled at him while walking down the same boardwalk.

A short thread from here in Seaside Heights, NJ, where—not so long ago—young men would shout the word “f****t” out their car window as we’d stroll along the boardwalk.

But as Vidal and Beyers passed, the "rowdy bros" treated them the same as the straight couples, asking them to kiss and, when they did, cheered them all the same. Del Moro thought the moment was "worth sharing and an encouraging moment for young LGBTQ folks out there."

I looked at Alec (my boyfriend), my mom, my sister, and stopped to make sure the couple was okay as they walked by... worried that something might happen. The rooftop crew quickly switched from “KISS HER!” To “KISS HIM!”

After some hesitation, the young men kissed... and let me tell you: both the rooftop crew and everyone else on the boardwalk just went absolutely wild for them and we all breathed a sigh of relief.

This is not a “look everything’s fine now, thread,” and yes... it’s New Jersey, but I just thought it was worth sharing and an encouraging moment for young LGBTQ folks out there.

BuzzFeed News spoke to Vidal and Beyers. Vidal, a junior at Lacey High School in Ocean County, said guys pick on both of them for being gay. Beyers, a senior at Hillsborough High School in Somerset County, said it was "shocking" to hear the people cheering them on, chalking up the interaction as a "small victory."

"It was so surprising that these guys were supporting us," Vidal told BuzzFeed. "Especially after what I've gone through."

As it turns out, Del Moro knew one of the "bros" who cheered on the couple. The guy said they were on the boardwalk for a bachelor party, and they were all very happy for Vidal and Beyers.

Another little update: I've heard from one of the "bros" on the roof (turns out I know a few of them... because, of course, it's Jersey). He said they were up there for their friend Wilson's bachelor party and they love this whole thing. "We are all very happy for those guys."

The person whom the bachelor party was for spoke to BuzzFeed. The man, who wished to remain anonymous, said he knows what if feels like to enter a situation where he might be harassed or made fun of, so he was "thrilled" that Vidal and Beyers found joy in the moment.

"I wish them all the best in the future and encourage them to never stop being themselves and to ignore those that seek to not allow that," he told BuzzFeed.

The story has since been picked up by other news outlets and has garnered a heartwarming reaction on social media.

As a New Jersey native who knows how rowdy and also ruthless seaside guys can get, this was straight up heartwarming. I’m not crying, someone’s cutting onions.

That’s so sweet and heartwarming, And also teenage Nathan is extremely jealous.

Man, this brought tears to this old dads eyes.
No matter who my son or daughter love, it us beautiful to see love honored.
So damn beautiful.
Thank you for sharing.

Given how much crap you read about, I was expecting a horrific ending. Thanks for this encouraging story :)

Thank you for sharing this Mike.

This would not have happened when I was growing up.
Was actually scared part way through.

Everything is not fine, but improving?