'Get back in the car': Truex Jr.'s racing challenges nothing like the one his girlfriend faced 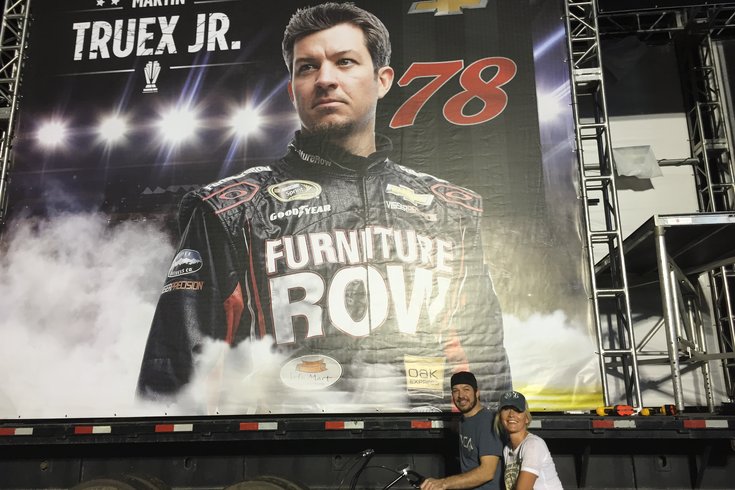 Sunday, Martin Truex Jr. will probe the multitude of faces to find her. Sherry Pollex will look at Truex Jr., and he’ll look at her from a distance in that unspoken code lovers have. Then Truex will tug his helmet on, climb through the window, slip down behind the wheel of his car and whirl around Dover International Speedway going in upwards of 200 mph in the NASCAR’s Sprint Cup Series “AAA 400 Race for Autism.”

That’s been the easy part these last five months for the NASCAR veteran driver from Mayetta section of Stafford Township, N.J.

The hard part of it is hopefully by him and his longtime girlfriend, Pollex, who battled a 17-month ordeal with ovarian cancer, which takes the lives of 14,000 out of every 22,000 women that are diagnosed each year with the deadly disease. One in five women will have a pelvic mass in their lifetime. Most are not cancerous. Ovarian is a women’s cancer with the highest mortality rates.

“This has actually made me a better driver,” Truex admitted. “When I get in the car the focus comes naturally. That was the easiest part of it. The hardest part was leaving home when Sherry was there fighting. I’ve always been pretty laid back, but I guess one thing that sticks out is it made me focus more on what I can control in life and less on what I can’t. Enjoy what I'm doing more and the people around me.

"You have no time to feel sorry for yourself, you have no time to be weak. You keep going, and I learned that I’m a lot stronger than I was. My body and my mind can handle a lot more than what I thought I could handle."

“It’s why I say I don’t know anyone that is as brave as Sherry. I can’t imagine facing those odds with such confidence. It was really inspiring to me and a lot of others.”

Truex and Sherry knew nothing about ovarian cancer, so they want to help other women. It’s why they are creating awareness for earlier diagnosis of ovarian cancer through the launch of the first of its kind website KnowPelvicMass.com and the liquid biopsy OVA1.

Diagnostic tests like the OVA1 blood test make a difference in getting women to the right doctor for their very first surgery with can improve survival up to 40 percent. When dealing with the gynecologist cancer with the highest mortality rates, it’s a very important step.

Sherry is using her voice asking women to know pelvic mass — the signs, the symptoms and proper care. She and Martin are ambassadors for Vermillion, Inc., the company behind the OVA1 Blood Test.

For four months, she played patient pinball bouncing around from one doctor to another, trying to identify the cause for her ongoing pelvic pain — only to finally learn she had ovarian cancer.

“It’s a day I can’t forget, Thursday, August 7th, 2014, which was an off-day during the middle of the worst season of my NASCAR Sprint Cup Series career,” Truex recalled. “Sherry underwent some testing earlier that day. When Sherry’s doctor asked our families to come to the hospital immediately, we knew something wasn’t right.”

Then it hung there — ovarian cancer — two words no woman wants to hear.

“I hadn’t been feeling well prior to that for four months,” recalled Pollex, who has launched her own website to bring awareness to ovarian cancer called SherryStrong.org. “I knew something was wrong, because every time I ate something I felt really full. I went to my general practitioner, and told her I wasn’t feeling well. She sent me to an OB-GYN (obstetrician/gynecologist) to do a series of ultrasounds.

“At no time did anyone offer an OVA1 test, because if they did, that would have immediately raised a red flag that something was wrong. I was actually diagnosed , through a friend of ours who was a gastro surgeon because I was in so much pain and that I needed to get help.

“When I first heard I had it, I didn’t know the severity of it, because I didn’t know someone my age could get it, and I didn’t know much about it. I wasn’t educated enough about the disease. I remember not crying and going into instant survival mode. From that mode, I did what the doctor told me and I haven’t looked back since then.”

Then came a series of doctor visits, chemotherapy, and the surgery just over a week after Pollex was diagnosed. What doctors found was that the cancer had spread to different areas of her body, with tumors that covered her spleen and appendix. 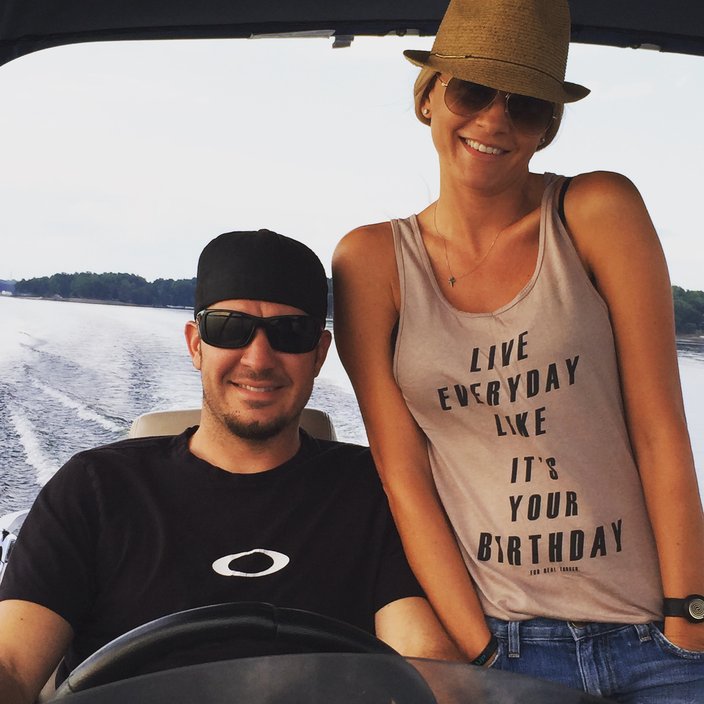 Truex didn’t want to leave her side. But she urged him to continue the season.

Truex made it a point to call Sherry before every race. Once he put on his helmet, he could escape to that other world of whizzing at breakneck speed against the greatest drivers in the world, where one small mistake, one tweak of the wheel here or there could lead to disaster.

“For me, it was a way to get back to normal, and I was doing what she wanted me to do,” Truex said. “It’s why I say the whole experience has made me a better driver. But Sherry is the real hero in this whole thing.”

Sherry’s scan was clear in January 2015 and she did an additional 12 months of chemo as insurance to keep her body from experiencing another recurrence. Ovarian cancer has an 80-percent recurrence rate when diagnosed at the Stage 3 level.

And made Sherry discover a few things about herself.

“I didn’t realize how strong I was before this happened to me, because you have no time to feel sorry for yourself, you have no time to be weak,” she said. “You keep going, and I learned that I’m a lot stronger than I was. My body and my mind can handle a lot more than what I thought I could handle.

“You don’t want the people around you to go through it. Sometimes it’s easier being the person going through the treatment than being the people around you. It’s almost worse seeing your family’s reaction and your loved one’s than almost your own. They feel helpless because they can’t do anything. No one wants to watch the person they love going through this. For Martin, I think what I had to go through gave him a whole different perspective. It made him a better driver. He stopped feeling sorry for himself if he had a bad day at the track, because he thought about what I was going through.

“He has the same attitude like that today. The NASCAR community was huge in this, too. They helped and supported Martin and it was a good distraction for him, knowing people cared about him. That meant a lot. These guys are competitors on a race track, but they’re family off of it. It’s why NASCAR is such a unique sport, because of the camaraderie between the guys. They were there for him the entire time. Every weekend I told him to go to the racetrack and do his job.

“After the last chemo in January (2016), we went to the Bahamas for eight days. Everything is different in our lives. You’re just so thankful to even be alive. Everything in your life is better. The one thing cancer can give you is the gift of perspective, and it’s a gift just to wake up every day.”

And go to the track.