Ghost: seeing past the metal and the mask 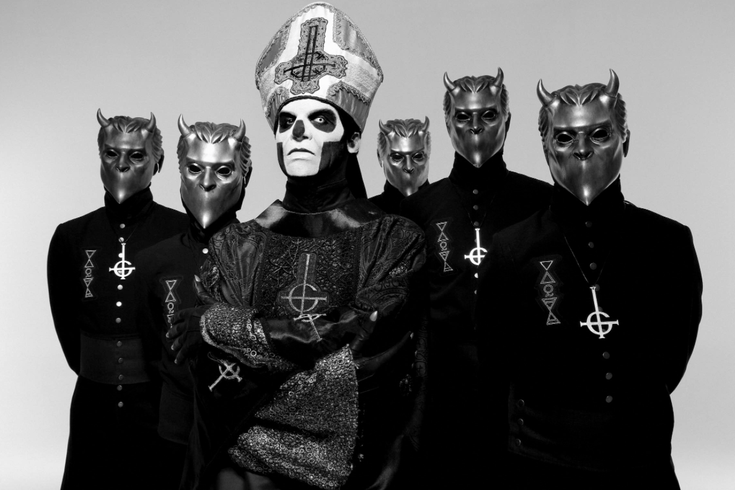 “The message doesn’t have to be ‘screw the Church,'” said the Nameless Ghoul.

For all its legendarily sacrilegious, soulless lyricism and unholy mocking costuming, Ghost – the Swedish Satanic doom metal act with anonymous membership whose album “Meliora” won a 2016 Grammy for Best Metal Performance – make a buoyant brand of rock that’s both melodic and contagious.

Philly audiences can witness the morose madness and majesty of Ghost, Thursday night, July 20, at The Fillmore.

RELATED LINKS:  Joe DeRosa takes no prisoners | PV to 311: about that bar fight with Scott Stapp...? | Should bands play on after the loss of their frontman?

To go with its sleek musicality, neatly ordered arrangements and clarion-clear vocals (from Papa Emeritus, the skull-faced frontman in the Pope outfit), Ghost’s devil-masked instrumentalists, the “Nameless Ghouls,” are decidedly rational, intelligent beings in conversation, rather than be expletive spouting, green goo-splashing cretins reminiscent of “The Exorcist.” There may be a Beelzebub-ian theme to all that is Ghost-ly, but that doesn’t mean it isn’t more for show than it is a lifestyle for its members.

“I guess I have to live through what I planted in the first place, so I guess the answer is ‘yes,'” said Ghost’s guitar-playing Nameless Ghoul in response to a query about believing Ghost’s devilish doctrine and licentious lyrics. Nameless Ghoul, who formed the band more than 10 years ago and asked not to be identified, continued that line of thought.

“Still, it is as confusing for me as it is for everyone else. Then again, that’s what makes it fun.”

Going back before his time as a Ghost mastermind, this Nameless Ghoul's had a long history of playing metal.

“As a kid, as an adolescent, that’s my background in starting bands. My first recording experience was with death metal,” he said. By the time he got into his 20s, however, his music began to grow richer and more melodic.

“By the mid-2000s, I came up with a mixture of the two – melody and metal – and that concoction became Ghost,” said the Nameless Ghoul. 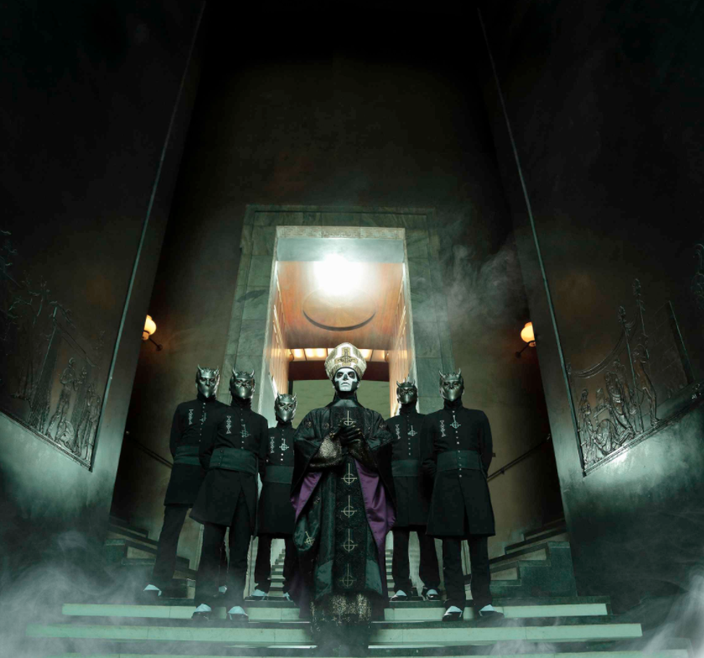 With all of this curious and inventive musical development, why then would anyone in Ghost – through three studio albums, an upcoming live album before Christmas 2017, and this month’s “Popestar Tour” – choose to be anonymous?

“There is a distinction between being masked and being anonymous,” the Nameless Ghoul said with a laugh.

“If I truly wanted to be anonymous, I shouldn’t have played in a band in the first place.”

Returning to the ideas of Ghost’s often anti-Christ anti-social lyricism, there is the idea of where religion fits in the life of the Nameless Ghoul. For this guitar-playing specter, religion is something like the magic he believed in as a child.

Intellectually, I knew that Darth Vader was played by an actor from Wales with James Earl Jones’ voice, but the child in me found the magic. I have a similar relationship with religion. I believe something supernatural exists, much like The Force.”

“Like 'Star Wars,'" he said, “intellectually, I knew that Darth Vader was played by an actor from Wales with James Earl Jones’ voice, but the child in me found the magic. I have a similar relationship with religion. I believe something supernatural exists, much like The Force.”

The Nameless Ghoul is also quick to remind listeners and readers that all Ghost rhetoric is not meant to be profane or to diss the sacred. Instead, there is much deep, grey matter between the black and white, and that much of what Ghost writes touches on the comings and goings of mankind in relation to God or gods.

“The message doesn’t have to be ‘screw the Church,” said the Nameless Ghoul.

“Maybe it’s about human nature. The songs are never actually about God, but rather our interpretation, about the relationship between God and man, and how that relationship affects the ‘little guy’ who is abused by the ‘bigger guy.’”

The Nameless Ghoul also states that it is not doctrine, but rather, society that is dangerous.

“That it is apparent from the news over the last 10 years that religion is very, very bad for mankind, as too much horror is created in its name.”

With all this to say and play, is the costuming and shtick that make up Ghost’s visual cues a blessing or a curse? The Nameless Ghoul believes that, overall, it’s a blessing.

“I don’t think we would have gotten anywhere, save for all that.”