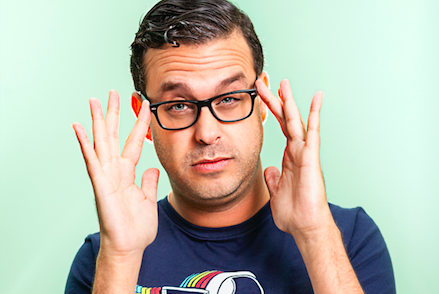 "I just think social media has made connecting far too easy. It's just not special anymore," said DeRosa.

“Come on, man. I only left Philly to be closer to 'showbiz,'" DeRosa said sarcastically of leaving South Philly for Los Angeles.

The biz of show is one of his favorite, harshest topics of humor, one he’s embraced heartily on his most recent Comedy Central Network showcase, “You Let Me Down,” and a handful of self-released comedy albums. In the same manner, he views porn and celebrity, DeRosa believes that too much ease of access makes those topics limp and listless. Take social media and all forms of easily accessible communication: “I really think it's great everybody has a chance to express themselves, but when zero effort is required to do so, people take it for granted and lose respect for the responsibility that comes with communicating,” said DeRosa.

“And I've been guilty of that myself. I just think social media has made connecting far too easy. It's just not special anymore.”

What is special for DeRosa is his fervent belief in, and appreciation of, the comedy album, as he’s released nine recordings of his stand-up routines since 2007.

“I love making albums. Guys like Pryor and Carlin released them left and right in the 70's, as did many of the rock acts back then,” said DeRosa enthusiastically, crediting George Carlin's “Parental Advisory: Explicit Lyrics,” Bill Cosby’s “Himself,” and Andrew Dice Clay's “The Day The Laughter Died"..."To this day, my favorite comedy album of all time."

Beyond mere laughs, there is a marketing methodology to how DeRosa, the entrepreneur, makes and releases his work.

“I'm also a big hip-hop fan, and the rap artists I grew up listening to always put out EPs between their albums,” said DeRosa.

“I try to do the same. I release tent-pole albums, then, in between, try to release unreleased material, b-sides, and leftover stuff. I even try to include bonus material on albums when I can. I just take a real music approach to the whole thing.”

That makes sense, as DeRosa occasionally puts out rock-tronic albums under numerous nom de plumes such as Salsa Windfall, Funeral in the Mirror and DemonRiot.

That was the best part about starting here and why I love coming back to perform. No topic is off limits. As long as it's funny and true, you're good.”

It is comedy, though, that is DeRosa’s deepest passion. There are his appearances on Comedy Central’s “Inside Amy Schumer,” FX’s “Louie,” HBO’s “Bored To Death,” and E!’s “Chelsea Lately.” There is the love he’s shown for the podcast medium on shows such as “Down with Joe DeRosa,” “We'll See You in Hell,” which focuses on providing commentary for horror films,” and “Emotional Hangs,” the last of which touches down on topics such as male bonding, the terror of modern politics.

“The s***show that was last year's election made me more disenchanted with the illusion of American democracy and strengthened an already stern lack of faith in our system,” he said, including the city from which he hails.

“Philly is a great town because the people are so honest and real,” said DeRosa.

“That was the best part about starting here and why I love coming back to perform. No topic is off limits. As long as it's funny and true, you're good.”