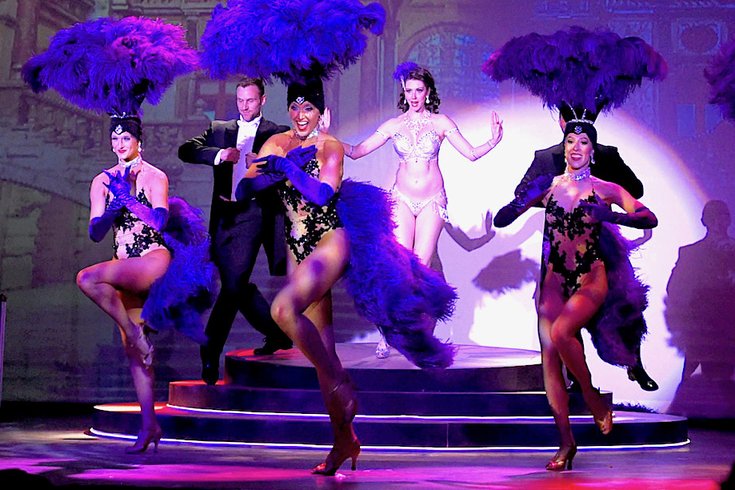 What was once an experiment is now an institution.

Four years ago, Atlantic City-based producer Allen Valentine somehow talked the suits at Borgata Hotel Casino & Spa — which, during its then 10-year history, had never programmed such a production – into letting him stage a revue-style show in the 1,000-seat Music Box.

Valentine knew that the standard casino “revusical”— a salute to Broadway, for example — wouldn’t fly at the property that continues to define the cutting edge in local gaming circles. So, he created “The Burlesque Show,” a breezy, cotton candy-light hour that combines the two things everyone loves the most: sex and laughter.

While the big song-and-dance numbers and featured performers have changed annually (with one crucial exception), the basic format remains constant: Offer “classy” striptease numbers (ending at pasties and G-strings thanks to New Jersey’s no-nudity-if-you’re-serving-booze laws) and break them up with the kind of naughty-but-not-overly-vulgar brief comedy sketches (or “blackouts”) that were part and parcel of the burlesque realm in the first half of the 20th century.

But this consistency of format shouldn’t discourage those who have seen it in past years. Be advised it’s just as much fun as it’s been in the past.

A lot, of course, has to do with the troupe of young women who comprise the dance ensemble and featured-performer roster. They tempt and tease, to be sure, but do so in a way that dates to a far more genteel and circumspect time. They are sexy, but not gentleman’s-club trashy. However, the real secret to the continued success of “The Burlesque Show,’ which runs every Thursday through Oct. 26, has to be the presence of comedian Jeff Pirrami, who has served as host/emcee since the show debuted.

The rather corpulent Pirrami, who cheerfully refers to himself as a “fat rat bastard,” is proudly lewd, crude and often rude: He distributes his biting, but all-in-fun, barbs equally between audience members and himself. And he is a hoot, even when not saying a word, as his physical presence alone is enough to ignite belly laughs.

But Pirrami is just one source of the fun. There are also the brief, R-rated sketches that are, more or less, old-fashioned (and just plain old) dirty jokes come to life. I’d like to rehash the one in which Pirrami pays off a $2,000 debt, but I know I’ll be laughing too hard to type.

Suffice it to say that the bit, like rest of “The Burlesque Show,” is as fine a way to spend some time on a Thursday night as there is in Atlantic City.

Like “The Burlesque Show,” “Kiss My Burlesque” is presented only on Thursday nights. But that’s where the similarity ends. This version of “burlesque” simply showcases two exotic dancers performing gowns-to-pasties-and-G-strings routines. There are no full-blown dance numbers or comedy interludes.

However, the soundtrack is presented in a most clever way: The huge video screen behind the bar displays a jazz trio (bass, drums, saxophone) playing the tunes (including a trio of Led Zeppelin songs!) to which the women strip.