How Girl Scouts Beyond Bars supports children with incarcerated mothers 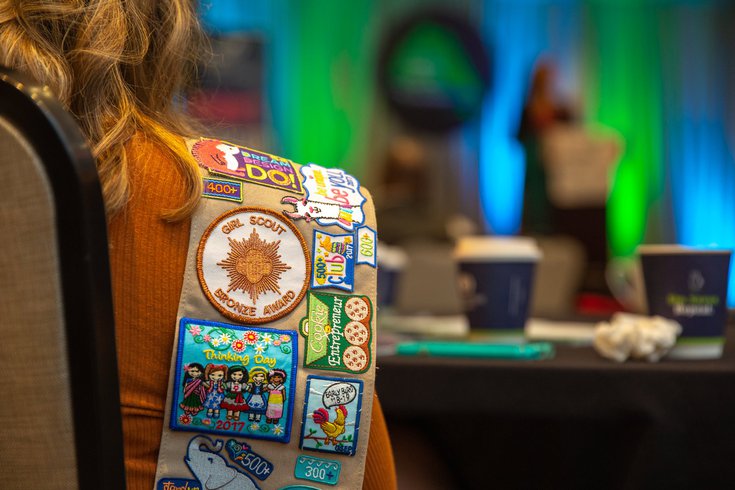 Girl Scouts Beyond Bars has supported daughters of incarcerated mothers with regular prison visits and specialized programming since 1992. The Girls Scouts of Eastern Pennsylvania was among the earliest adopters of the program.

The Girl Scouts in Troop 98010 earn badges, make bracelets and go on camping trips, just like any troop would. But twice a month, the scouts embark on a special journey to Riverside Correctional Facility in Northeast Philadelphia to visit their mothers and involve them in troop activities.

All 25 members of Troop 98010 are children with mothers in prison. They are participating in Girl Scouts Beyond Bars, a national program launched in 1992 to blunt the impact of incarceration on families. The Girl Scouts of Eastern Pennsylvania was one of the program's earliest adopters, and 30 years later, it's still serving kids across Philadelphia.

"We want them to advocate for themselves, use their voices, feel empowered to make great decisions and to go against the crowd," said Carin Johnson, the mission delivery director for Philly. "We want them to say, 'Hey Miss Carin, I'm not feeling great today. I miss my mother.' Or, you know, be able to express their emotions and take action around what is going on in their world. And to be able to articulate that in a way that is positive, so they're not holding that in, and then it comes out or manifests itself in a negative way.

"When you are torn or ripped away from your mother, a lot can happen."

Researchers estimate up to 5 million U.S. children have a parent in prison, and the effects can be devastating. These children have worse access to health care, resulting in unmet mental health and dental needs. They also struggle more in school, earning lower grades and facing more disciplinary action. A 2004 study found that kids with moms in prison were more like to fail classes, get suspended or drop out.

Most worrisome, children with incarcerated parents are six times more likely to end up incarcerated themselves.

The Girl Scouts Beyond Bars program strives to intervene at a critical age, providing kids with a safe space where they're surrounded by children going through the exact same hardships. It's also an opportunity for the mothers, who must meet certain criteria to join. The prison must approve each mother's inclusion in the program, based on current behavior, and if her sentence has anything to do with a crime against children, she cannot participate.

For the families that join, the two-hour Saturday visits are a chance to journal together, play games and just catch up. "We open the session with them just sitting with their mothers and telling them about their day and their week," Johnson said. "Things they would do normally if they came in from school at home. We want to create that environment. There is no glass or partition between the daughter and the mother. We are in a gym setting, so they are allowed to have physical touch with their daughters ... to sit in conversation in an environment that feels like home, that feels real." 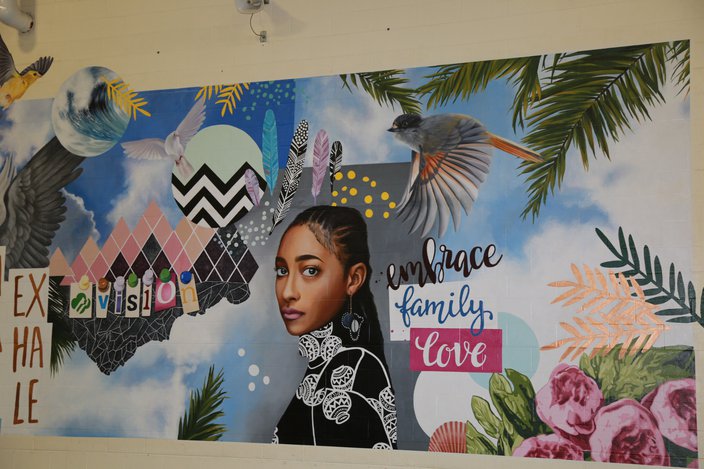 A mural at the Riverside Correctional Facility, painted by Girl Scouts Beyond Bars in partnership with Mural Arts Philadelphia.

The other two Saturdays each month, the girls take a bus to the Girl Scouts' Shelly Ridge campgrounds in Lafayette Hill, where they have traditional troop meetings, with all the uniforms and cookie assignments that go with it.

Membership in the program has ebbed and flowed over the years — the troop's peak was 50, Johnson said — but the curriculum mostly stayed the same. The program leaders realized it was time for a change in 2020, when the COVID-19 pandemic forced Girl Scouts Beyond Bars to go virtual.

"We were shut down and couldn't take them to the prison, (and) we really realized how archaic the curriculum was and how it was not resonating with our girls," Johnson said. "So we really did ask them, what would you like to see?"

Music was a common answer, as was more time outdoors. The program hired a new employee with a background in social work to incorporate these requests and some internal ideas into a new curriculum, which launched this year. It's a "test year," Johnson said, which means they're taking notes and retooling as they go. But so far, they've been pleased with the increased emphasis on mental health, and the girls have loved all the new Scout songs they sing in meetings, games and nature hikes.

"The girls, they have a say in it," Johnson said. "They could say, 'Oh Miss Carin, this is weird, what about this one?' Or, 'Miss Carin, that doesn't sound right, we don't talk like that anymore. The word should be this.'"

Though the troop's programming can be a bit insular by design, the girls get to mingle with other Philly troops at community programming, like their MLK Day of Service events. Each year, the girls choose an organization to support — past picks have included women's shelters and Meals on Wheels — and invite other local Girl Scouts to converge at the Shelly Ridge facility to help them pack kits or write cards.

It's an opportunity to see how other troops are run, and find commonalities with girls their age who may be leading vastly different lives.

"We definitely never want them to feel like they're on an island, right?" Johnson said. "Internally, we call them Girls Beyond Bars, but externally, they're Troop 98010. So when they're outward facing, no one looks at them as if they're different."

Johnson only has been with the program for five years, but she's already seen life-altering transformations — girls graduating high school and leaving for college, mothers getting out of prison and becoming lawyers or even mothers and daughters opening businesses together. Program grads often keep in touch, shooting a quick text or email to share recent successes.

Given the obstacles in their paths, it's outcomes like these that keep Girl Scouts Beyond Bars running year after year, through troop turnovers and worldwide pandemics.

"To be sitting with a mother at the graduation of her daughter from high school, when six months ago I was sitting in a prison with them, it really does warm your heart, and allows you to see the impact and value that this program can have."