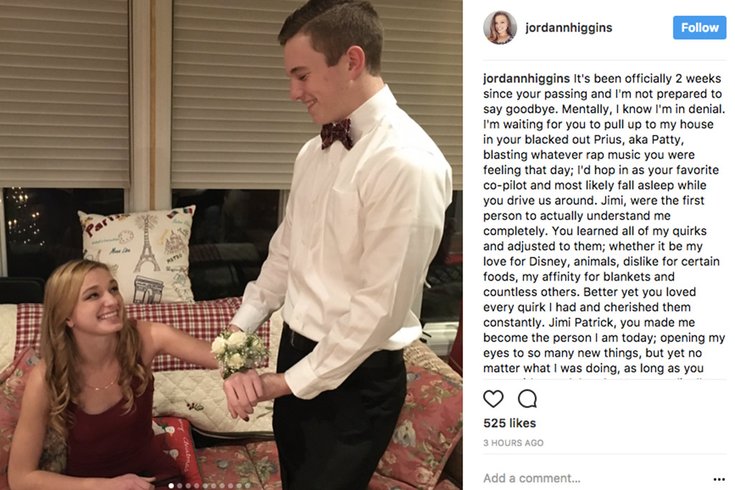 On the two-week anniversary of his death, Jordan Higgins wrote a moving tribute on Wednesday to Jimi Tar Patrick on Instagram. Patrick was one of four suburban men murdered on a Central Bucks County farm.

Two weeks after the death of 19-year-old Jimi Taro Patrick, the first of the four victims murdered on a Bucks County farm, his girlfriend has spoken out on Instagram to pay tribute to the life of the promising young college student and youth baseball standout.

On Wednesday afternoon, Jordan Higgins, who attends college in Pennsylvania, posted a message addressed to Patrick.

In it, she writes: "Jimi Patrick, you made me become the person I am today; opening my eyes to so many new things, but yet no matter what I was doing, as long as you were with me I felt safe. You even finally made me believe in love."

And she ends with: "Jimi Patrick you were incredibly kind, sweet, hilarious, handsome, genuine, and millions of more amazing terms. Thank you for giving me some of the best years and moments in my life, I will cherish them and your memory forever."

Patrick's body was the last of the four recovered after a grueling search of the Solebury Township farm owned by the parents of Cosmo DiNardo, who confessed to murdering the four men with the help of his cousin, Northeast Philadelphia resident Sean Kratz. Both men are charged with murder and related crimes in what authorities say were attacks stemming from marijuana deals.

Prosecutors said they agreed to hold off on pursuing the death penalty against DiNardo in exchange for the remote location where Patrick was buried, separate from the three other men. Bucks County District Attorney Matthew Weintraub emphasized that it was a priority to bring Patrick home to his grandparents and loved ones in Newtown Township.

"We, as a group, made the decision to forgo the death penalty for the defendant in return for locating our grandson," Sharon and Rich Patrick said of the families and investigators involved in the case. "Our deep thanks to this strong group of friends."

A graduate of Holy Ghost Preparatory School in Bensalem, Patrick had been attending Loyola University in Baltimore on a full scholarship, studying business. Earlier this week, a GoFundMe page established in his memory by a Loyola classmate stated that all funds will be donated to a pair of organizations chosen by the Patrick family.

Services for Patrick will be held Friday at the Church of St. Andrew in Newtown Township.