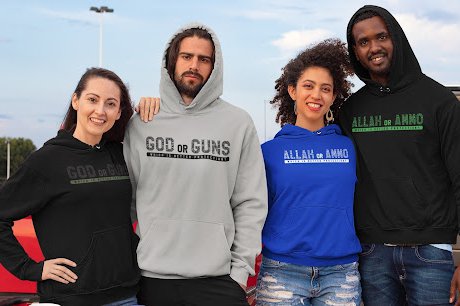 God or Guns is a clothing brand created by West Philly native Tyree Lewis. He envisions the slogan, emblazoned on all his products, reminding people to make good, rational decisions when faced with adversity.

Tyree Lewis has a question he wants young men in his native Philadelphia to ask themselves before they commit an act of violence: "God or guns?"

That's why it's the name of his clothing brand and emblazoned on the products he sells. Lewis envisions the slogan reminding people to make good, rational decisions when faced with adversity.

Lewis, 38, founded his business in 2020 in hopes that its messaging could help reduce the city's gun violence rates, which are currently as high as they've ever been. He sells T-shirts, sweatshirts and even sports bras emblazoned with the slogan, for people of all shapes and sizes. He also has an "Allah or Ammo" collection for his Muslim customers.

Lewis hopes the clothing attracts the attention of the young men who grew up like he did in West Philly, where the impact of gun violence was unavoidable. He said the situation is much worse now than when he was growing up.

"Things have changed," he said. "It's pretty violent."

Lewis said many God-fearing young men from neighborhoods like West Philly are tempted to respond with violence when they or their families fall under attack. He understands the temptation, but he emphasizes the need to seek another path.

"What you do today can impact your tomorrow," he said. "Don't let a 15-second choice get you 15 years to life."

Lewis shared his own story of resisting the urge to retaliate against his enemies with a gun, which he said probably saved his life.

When his father was killed in 2010, Lewis said he started plotting his revenge. He planned to kill several people he deemed responsible for his father's death with a firearm he was licensed to carry.

Despite having a 3-year-old son, a college degree and a promising career, Lewis struggled to shake his desire for revenge. But the night before he intended to carry out his plan, he had a dream.

In the dream, Lewis found one of his targets and emptied his gun's magazine, killing the man. But when Lewis went to look at the victim, he found his 3-year-old son lying on the ground bleeding out.

The dream was sobering for Lewis, who took it as a sign from God.

"I later realized that dream meant that if you go out here and kill this man, you're going to be hurting your family," he said.

Lewis grew up attending Zion Hill Baptist Church on 53rd and Spruce streets, and his Christian faith remains a part of his life, but he said he's not trying promote a faith. Rather, he believes his brand and its message transcend religion.

Lewis spends much of his free time designing clothes and giving motivational talks about resisting gun violence to young people around the city, but it's not his full-time job. By day, he's Chester County's director of quality management for the Department of Mental Health and Intellectual and Developmental Disabilities.

Although Lewis has lived in Northeast Philly for years, his family – he has a wife and three sons – recently moved to Montgomery County so that he could be closer to his work.

Before the pandemic he was attending Bethel Church in the Philadelphia Mills Mall. Now, his family is tuning into virtual services there while they search for a church closer to their new home.

And with God or Guns, he's still trying to make an impact where he grew up.