'Anywhere else, this would be a sacred site,' said a former Army veteran of the neglected burial place 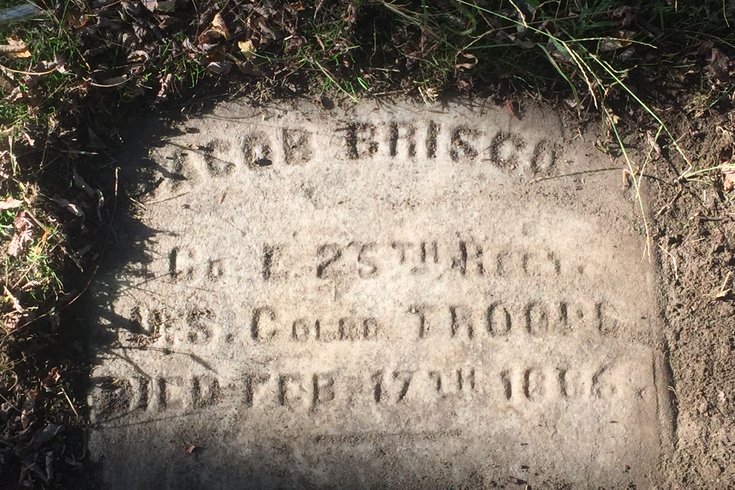 Private Jacob Briscoe of the 25th Regiment U.S. Colored Troops, Company E, mustered out with his fellow soldiers on December 6, 1865. He died February 17, 1886. His headstone in Johnson Cemetery in Camden was scraped clear of debris, leaves, grass and trash for this photo.

The neglect – and disrespect – afforded a Camden cemetery where more than 100 African-American veterans are interred is something of a sad slice of local history.

Veterans of the Civil War, the Spanish-American War and WWI are buried there, but you’d never really know that driving along Federal Street between 38th and 39th streets.

Most of the headstones were added to a Delaware River breakwater on the Camden waterfront. The few remaining stones were laid flat on the ground – like stepping stones.

Why? The explanation is lacking. 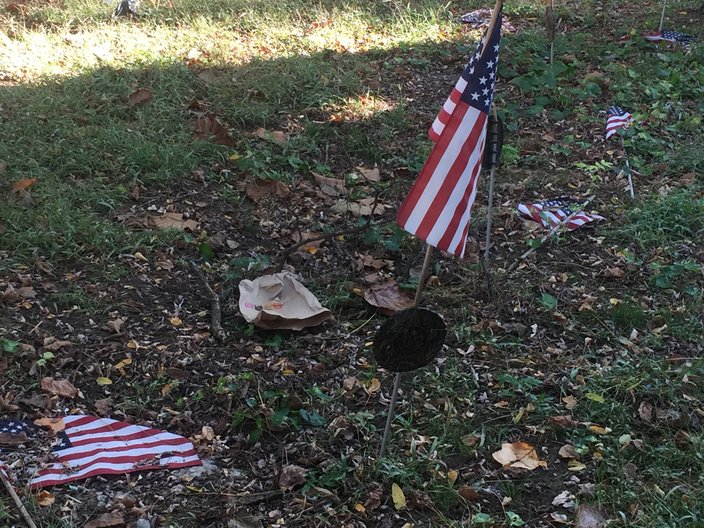 Most of the headstones were removed at Johnson Cemetery. Those remaining have been placed on the ground like stepping stones. The markers are covered by debris. Flags and markers identifying the dead veterans are askew, missing or broken.

Some Civil War vets' stones are engraved “U.S. Colored Troops,” featured in the movie "Glory" and the precursor to the better-known “Buffalo Soldiers,” legendary African-American cavalry units which served in the West following the Civil War.

Trash, leaves and weeds crowd over the stones, obscuring the names of the dead.

Over the years, stretching back to at least 1984, someone occasionally takes notice of the forgotten cemetery and there's a spruce-up. Grass gets trimmed. Markers get dusted off. 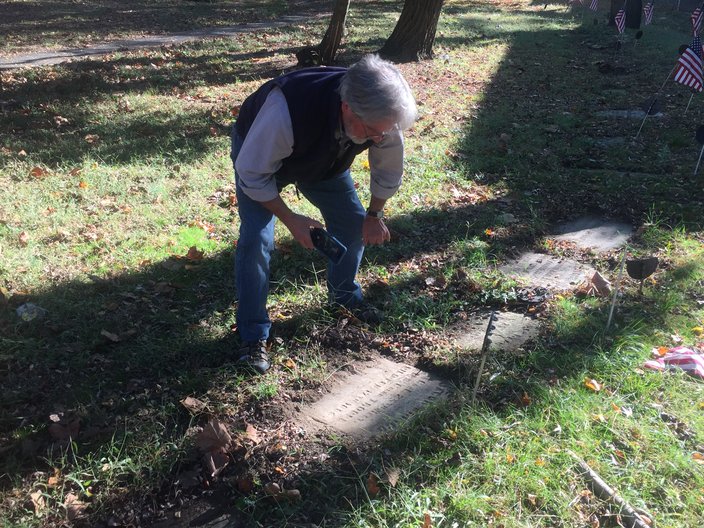 Jim Cummings, a military veteran and a leader at Urban Promise, a charter school in Camden, cleans off graves at Johnson Cemetery Memorial Park. 'Anywhere else, this would be a sacred site,' he said.

The attention to Johnson Cemetery was most notable in 2012 when a documentary film titled “The Lonely Bones” was released by Kevin Walker, a New Jersey public defender.

But then, as before, the attention faded.

Two years ago, with a bit of pomp and ceremony, the remaining stones were rearranged into a graceful arc toward the back of the plot off Federal Street, near a fence and a cluster of apartments. 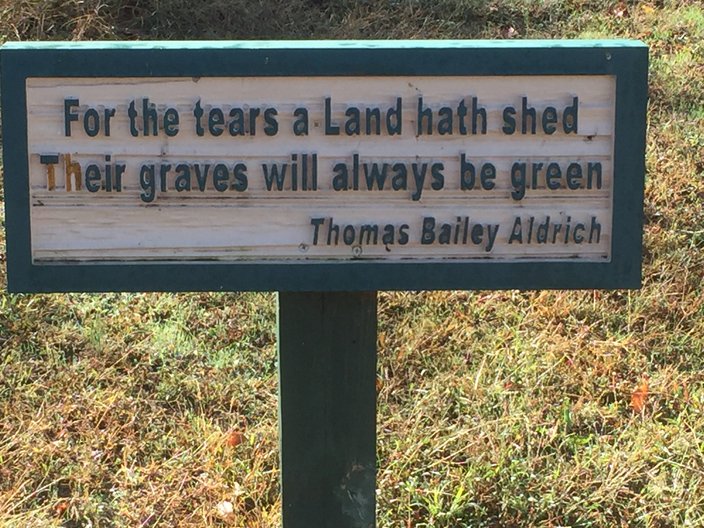 This sign strikes a hopeful tone, but it belies the condition of Johnson Cemetery.

UrbanPromise, a nearby charter school and outreach program, committed to an annual clean-up.

But after each clean-up, the cemetery inexorably returns to its unkempt state.

“Anywhere else, this would be a sacred site,” said Jim Cummings of UrbanPromise, who joined PhillyVoice at the site on a recent morning.

MORE LOCAL HISTORY: M.L. King slept there. But did he make history?

He credits the county for “improved conditions” and better signs, but thinks the small park is not always on the radar.

He looked across the park, away from the arrangement of fewer than 30 remaining memorials.

“There are other bodies here, but no markers,” he said, clenching his jaw. 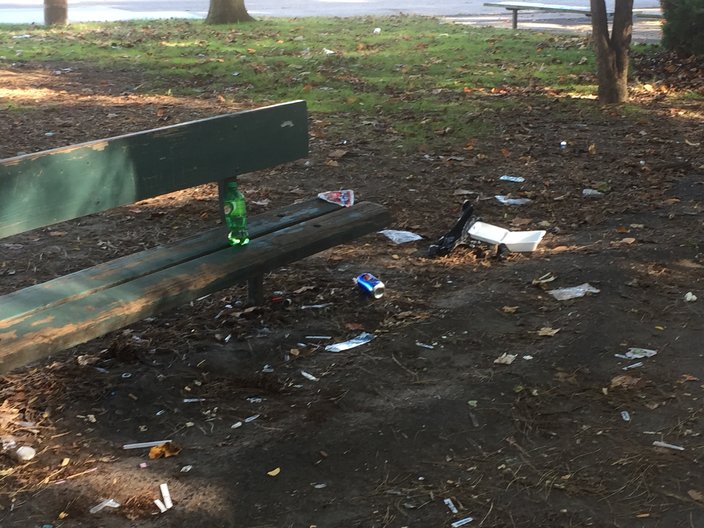 The cemetery is cluttered with litter and drug paraphernalia.

Walker, the cemetery’s documentary maker, said in the film’s trailer, “Today, there is little dignity here. The cemetery is strewn with liquor bottles, debris and the detritus of the drug trade.”

He made that statement when the film was released five years ago. Conditions were similar on PhillyVoice’s recent visit with Cummings.

Walker recalled his own discovery of the park recently, "Here, in East Camden, under piles of debris, was some of the most hallowed ground in New Jersey. And almost nobody knew it."

He said he learned the burial ground for these American heroes was actually in an adjoining field, but the bodies of the veterans had never been disinterred. The headstones, many in a state of disrepair, he added, were moved to their present location "in the shadow of a shabby apartment complex" during the administration of Mayor Randy Primas, in an ill-considered attempt to create a commemorative park.

"Unfortunately, because the headstones were laid flat and embedded at the bottom of a small incline, every time it rained, they were covered by dirt and debris," Walker said. "As a result, the memory of these great patriots became as obliterated as the headstones."

And while the site has been adopted by the Urban Promise students, the contours of the site make maintaining the grounds an endless struggle, he said.

"Johnson Cemetery is a sacred place, one that serves to commemorate the rich history of Camden and its  residents, but I fear its real significance will remain a mystery to far too many," said Walker.

For more on the history of the 1854 cemetery and those buried there, see Ancestry, here.

Also useful is lawyer Sam Asbell's book on black Camden County residents during the Civil War. The book is free and on the web here.