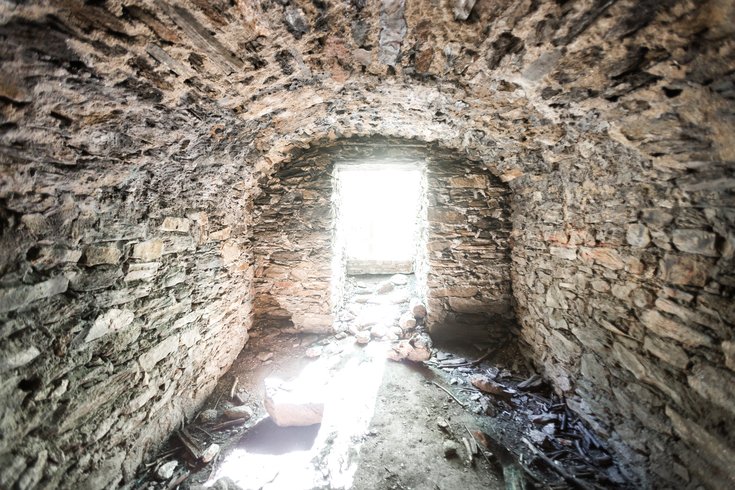 The interior of Johannes Kelpius' "cave" in Wissahickon Valley Park. The manmade structure – about the size of a springhouse – is one of the few surviving artifacts left by the German mystic and his so-called "Hermits of the Ridge."

Burrowed into the ridges lining the Wissahickon Creek is a cave that supposedly housed a 17th century mystic who believed the world would end by the year 1700.

The cave's dark entrance presents an ominous mystery to the people who unexpectedly stumble upon it while hiking in Philadelphia's Wissahickon Valley Park.

It's known as "The Cave of Kelpius," but in reality it's not really a cave at all. Rather, it's a manmade structure about the size of a springhouse. And it's one of the few surviving artifacts left behind by Johannes Kelpius and his so-called "Hermits of the Ridge."

But forget the cave for a moment, as well as the group's theories on the rapture – because the mystery only heightens.

Johannes Kelpius once held something so valuable that he did not want anyone to find it – ever. At least, that's how the story goes. 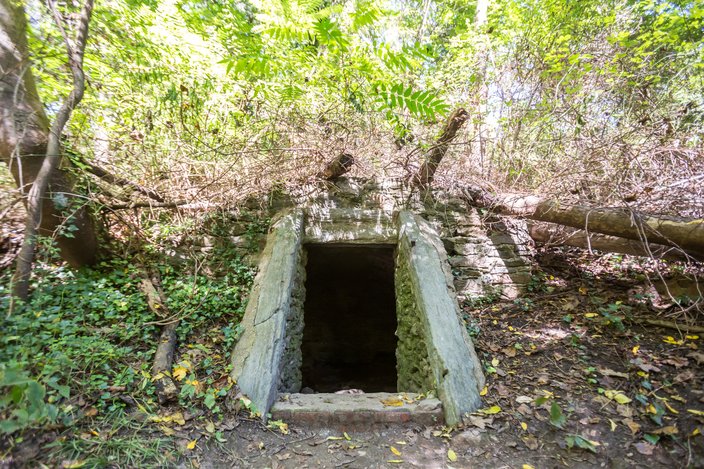 The entrance to 'The Cave of Kelpius' is located near Hermit Lane in Wissahickon Valley Park.

Kelpius was a German pietist who led a group of 40-some followers to Colonial America in 1694. They settled in the wilderness near Germantown, an area that today comprises Wissahickon Valley Park.

There, they lived in a reclusive community along the Wissahickon Creek, erecting a 40-foot tabernacle on the 40th parallel. As they awaited the second coming of Christ, they dabbled in botany, conjuring, divination and alchemy.

Kelpius, who had grown up in Transylvania, often retired to a cave where he would study and meditate. But his habit likely contributed to the tuberculosis that put him on his deathbed in 1708.

Three decades after Kelpius died, his former confidant Daniel Geissler provided a fantastical account to pastor Henry Muhlenberg, the namesake of Muhlenberg College in Allentown and the patriarch of the North American Lutheran Church.

"Did he bring it from Germany? That's what is fascinating to me....it made me want to go diving or dredging in the Schuylkill and see if that box is down there..." – Dan Rolph, historian

Kelpius did not believe he would die a natural death, but expected to be transfigured like the Jewish prophet Elijah, according to Geissler's account. He spent three days praying that God would receive him in the flesh.

When it appeared such a transfiguration would not occur, Kelpius handed Geissler a sealed box and ordered him to toss it deep within the Schuylkill River.

But Geissler instead chose to hide the box along the banks of the river, figuring he could keep its secret contents once Kelpius died. After all, Kelpius had been searching for an elixir of life to achieve immortality. Who knew what his so-called "arcanum," or elixir, might contain?

"Upon his return, Kelpius raised himself up and, with outstretched hand pointing to (Geissler), looked him sharply in the eyes, and said: 'Daniel, thou hast not done as I bid thee, nor hast thou cast the casket into the river, but hast hidden it near the shore,'" Muhlenberg wrote.

Now convinced of the mystical powers of Kelpius, Geissler – without giving an excuse – hurried back to the river bank and threw the box into the water. As it splashed into the water, the box allegedly exploded, producing flashes of lightning and peals of thunder.

Geissler again returned to Kelpius, who affirmed he had completed the task. Days later, Kelpius died at age 35.

The "Hermits of the Ridge" mourned his death inside the tabernacle. As they lowered his coffin into the ground, a white dove was released from a hamper and flew heavenward.

Today, Kelpius's burial site is unmarked and lost to history. 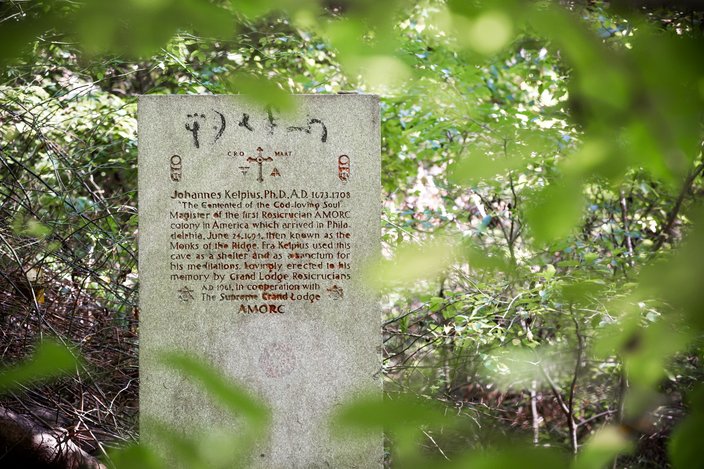 A stone plaque just outside the entrance to 'The Cave of Kelpius' tells an abbreviated history of his group of mystics.

What was in the mysterious box? And is Geissler's account credible?

Legend speculates the box contained the fabled philosopher's stone, believed to turn base metals, like lead or mercury, into gold or provide an elixir for all diseases. Theologians, physicians and alchemists had sought it for centuries, to no avail. (Fans of Harry Potter will remember that a philosopher's stone figured prominently in the first book of the series.)

There's no way of knowing what Kelpius's box held – unless one somehow fishes it from the Schuylkill River, said Dan Rolph, a historian at the Historical Society of Pennsylvania.

But it's a tale that leads to myriad, unanswered questions.

"Did he bring it on the ship, the Sarah Maria?" Rolph wondered. "Did he bring it from Germany? That's what is fascinating to me. When I first read it, it made me want to go diving or dredging in the Schuylkill and see if that box is down there, if there's any historical basis for this (story)."

Little is known about Kelpius's specific beliefs and activities. His personal writings haven't survived, except for some letters to other Christian pietists, a journal from his trip across the Atlantic Ocean and a hymnal.

None of them tell of the mysterious box, Rolph said. The only account comes from Geissler, who told it to Muhlenberg in 1742. And he did not detail the secretive contents held within. 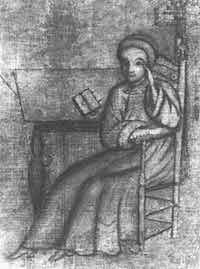 Johannes Kelpius was a German pietist who led a group of mystics to the Wissahickon Valley, where they awaited the second coming of Christ in the late 17th century.

Geissler's 275-year-old story very much reads like a motif, said Rolph, who studied folklore when completing his doctorate.

In particular, it reads an awful lot like a tale in which King Arthur instructs a knight to throw his magical sword, Excalibur, into an enchanted lake. The knight initially refuses. But when he eventually complies, the Lady of the Lake rises to receive it.

"I think that's a little too much for coincidence," Rolph said of Kelpius's box. "And these men were well-read. During that time period, of course, the King Arthur tales had already been published and disseminated throughout Europe."

Indeed, Kelpius and his followers had been educated at some of the most respected German universities of their day.

And though it is easy to dismiss the "Hermits of the Ridge" as fanatical today, Rolph said they weren't unique in their studies of Millennialism or their experimentations in alchemy and divination.

"People have this impression, nowadays, that maybe there were just a select few that were into this type of subject," Rolph said. "No, for generations – for centuries all the way back to the Middle Ages – people were into looking for the Elixir of Immortality or trying to transmute lead into gold and all that kind of stuff."

Many of the "Hermits of the Ridge" were quite accomplished despite their reclusive nature, including Christopher Witt, an English physician whose 1705 painting of Kelpius is believed to be the oldest oil portrait in America.

Yet, none of their contemporary writings mention Kelpius's arcanum. And unlike a motif – like the vanishing hitchhiker legend – Rolph has never found a similar tale repeated in Colonial America.

"It's not like somebody took that tale and suddenly it appears in Colonial Virginia in 1750 with Rev. So-And-So's death," Rolph said. "That, in a way, makes it unique and, in some ways, makes that story a little more plausible."

Maybe Kelpius's mysterious box actually is resting somewhere at the bottom of the Schuylkill River.

After all, a girl did just pull a four-foot sword from the very lake where Excalibur was rumored to have been tossed centuries ago.