Find out what costumes are trending 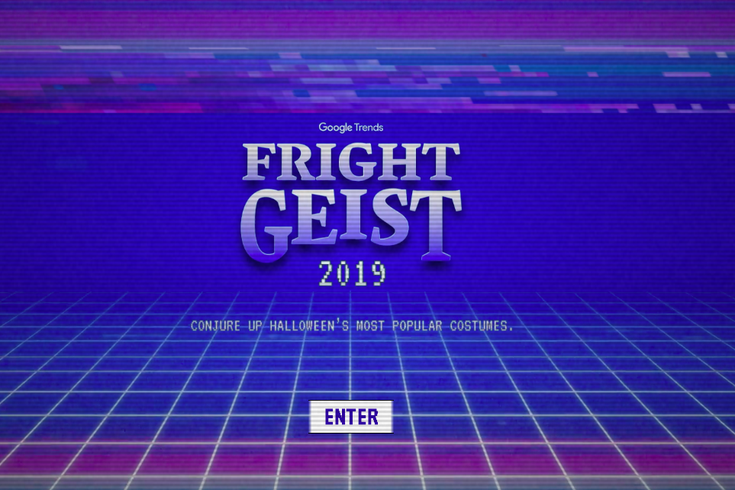 As we inch closer to Halloween, here's something scary to think about: walking into a Halloween party and realizing your costume isn't as awesome/unique as you thought because there are at least 12 other people dressed up as the exact same thing.

This year, you can avoid that thanks to Google's very-'80s-looking costume trend tool Frightgeist.

Google has ranked Halloween costumes by search volume based on location.

"IT" is the most-searched costume of the last month nationally, with witch, Spider-Man, dinosaur and "Descendants" following. Other searches on the list include "Fortnite" (No. 7), "Chucky" (No. 8), rabbit (No. 11) and "Stranger Things" (No. 13).

On Frightgeist, you can also find data about the most popular costumes locally. At the top of the page on the left side, click "locally" to let Google use your location. You also can click on "costume map" in the top right corner to see your area's most-searched costume.

In Philadelphia, "Descendants" is the winner. If you're not familiar, the "Descendants" franchise consists of three Disney Channel films about the lives of the teenage children of Disney villains.

It seems likely you'll see quite a few kids dressed up as characters from the movies if you're handing out candy this Halloween.

There's also an option to click on "costume wizard" in the top left corner. The tool will help you pick your Halloween costume. Choose your preferred level of spookiness and uniqueness, as well as whether you want the style of the costume to be classic or modern.

Some of the costume suggestions it gave me were Demi Lovato, a raven, "Edward Scissorhands, Cruella de Vil and Walter White – which are honestly some great ideas for this year's Halloween. Thanks Frightgeist.