The Cameroonian native aims to a bring a moderate outlook to Harrisburg with a focus on education, health care and business opportunity 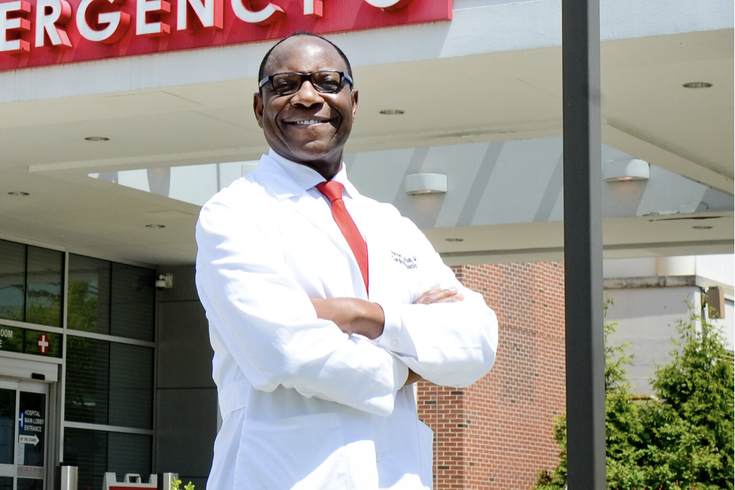 Nche Zama, a Cameroonian native, came to the United States as a teen and went on to become a heart surgeons. Zama is running for Pennsylvania governor in 2022 as a moderate Republican.

Nche Zama, a cardiothoracic surgeon, is an outsider in the large field of Republican candidates seeking to place Pennsylvania's governorship back in GOP hands.

Zama, 65, emigrated to the United States from Cameroon when he was a teenager. With only $20 in his pocket, Zama found compassion and support upon his arrival and pursued a career in medicine.

Now retired after a prestigious career, Zama has turned his attention to Pennsylvania politics.

Facing off against a slate of more established candidates in Tuesday's primary election, Zama is campaigning as a moderate Republican who aims to heal the state's political polarization by focusing on common-ground issues such as education and health care.

"We have to be able to bring people together, so I want to bring the various factions together," Zama told WGAL in early May. "We do not have to be uniform, but we must be united. And if we're not united, any agenda is meaningless."

In Cameroon, Zama's parents were illiterate and left to rely on hard work alone to support him and his five siblings. Zama witnessed his mother's death at a hospital when he was 10 years old. She died of childbirth complications and a lack of access to trained medical providers. His father subsequently sent him to the U.S. to give him better opportunities.

This experience informed Zama's anti-abortion stance and other priorities in seeking political office. In the realm of health care, he has called for a "people-centered" approach to drive Pennsylvania's ongoing recovery from the COVID-19 pandemic and other public health crises.

"We will exploit every opportunity to lower healthcare costs and deliver the best outcomes to everyone, especially our most vulnerable: the elderly, veterans, our children and the economically disadvantaged among us," Zama wrote on his campaign website. "Additionally, I will work tirelessly to address the opioid epidemic and mental health crises plaguing Pennsylvania."

A resident of the Poconos, Zama has held high-ranking positions at hospitals throughout Pennsylvania, including a stint as director of cardiovascular and thoracic surgery at Jefferson Aria Health in Philadelphia. He completed his medical training at the Cleveland Clinic and Harvard University.

Zama also led several global humanitarian missions during his medical career, performing the first pediatric cardiac surgery in Cameroon during one of his African trips.

In addition to his work as a physician, Zama also spent much of his professional career as an educator, including a clinical associate professorship at the University of Pennsylvania.

Since arriving in the United States, Zama has financially supported more than 24 nieces and nephews in higher education. He considers education a foundational part of his run for governor.

"I can honestly testify to the power of education and will make it my priority that all Pennsylvanians realize its importance," Zama's campaign website says. "Pennsylvania should be the leader in education; unfortunately, we have fallen behind."

Zama also has argued that government regulations have hampered business growth and opportunity in Pennsylvania. His campaign calls for an economic strategy that addresses inequities in Pennsylvania while clearing the way for more businesses to escape high taxes and bureaucratic inefficiencies.

The retired surgeon told WNEP that he believes he offers Pennsylvania a better path forward than his more prominent GOP competitors.

"I am not concerned about the competition," Zama said. "I believe I am the best candidate running. By every metric, I am the ultimate package deal. A scientist at the helm in Pennsylvania, you couldn't see anything better than that."