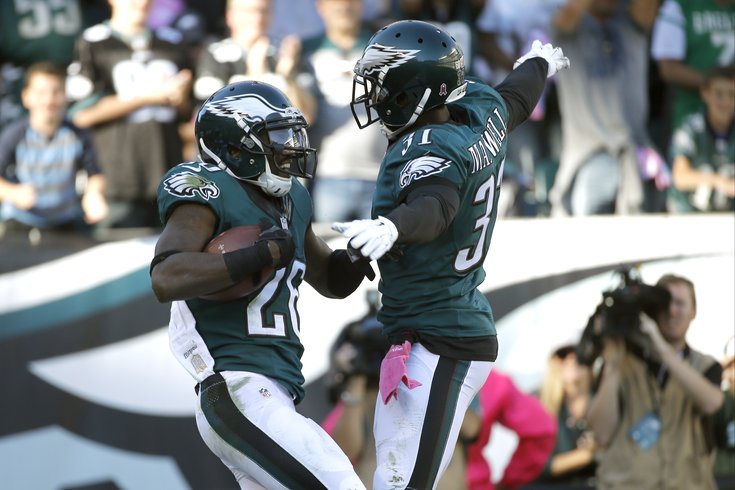 Last season, I'd give the Eagles' secondary an F. This year they have been massively improved so far.

Continuing on with our defensive grades, we'll now turn to the Eagles' secondary. In case you missed it, we graded the defensive line and the linebackers earlier this week, and the offense last week.

A season ago, the Eagles gave up the third-most pass plays of 20+ yards in NFL history. Big plays allowed were one of five reasons we identified as potential season-killers a year ago. Clearly, during the offseason, the Eagles had to fix their secondary. Here were the relevant moves they made:

• They not only made Byron Maxwell the fifth highest paid corner in the league, they specifically freed up money to do so. They also made a strong play to try to sign Devin McCourty of the Patriots, who Kelly called the best safety in the NFL.

• They essentially used four draft picks on cornerbacks. They traded both of their fifth round picks to move up in the second round to select Eric Rowe, while receiving a sixth round pick in return. With that sixth round pick, they selected JaCorey Shepherd. They also drafted Randall Evans five picks later.

• They signed Walter Thurmond in free agency, and subsequently gave him a shot to start at safety.

• They added Denzel Rice during the undrafted free agency period after the draft.

That is seven new defensive backs on the team who were added in one offseason. They also made a major addition off the field, hiring secondary coach Cory Undlin, who was formerly with the Broncos. During OTAs and minicamp, a number of Eagles players were singing Undlin's praises, which was a sentiment Kelly echoed when he spoke of their findings while vetting him.

"Very very knowledgeable," Kelly said this offseason. "Really technique-oriented, in terms of his approach and how he does it. I think he’s demanding, but yet he’s really fair. I think he’s got a way of coming across, getting the most out of the players. Players who have played for him have always spoke very highly of him."

Through five games, there has been drastic improvement. Maxwell and Carroll are of course the starters at corner, with Thurmond and Malcolm Jenkins (the lone returning starter in the secondary) at safety.

Maxwell struggled early against Julio Jones and the Atlanta Falcons, which defensive coordinator Billy Davis attributed to putting too much on Maxwell's plate too soon. The Eagles have scaled back his role, and he has played better. Carroll, meanwhile, has been very good, playing with outstanding technique. It's a wonder how he wasn't good enough in the eyes of the team to start over Bradley Fletcher or Cary Williams a year ago.

The Eagles have also gotten contributions from Rowe, who had a great game against the Jets Week 3, picking off Ryan Fitzpatrick and breaking up a deep ball, as well as Biggers, who has held his own in the slot. The corners as a group have been far from perfect, but clearly, they've been an major upgrade from the slop that was in place a year ago.

Meanwhile, after years of really bad safety play, Jenkins and Thurmond might be the best performing safety duo in the NFL so far. Thurmond in particular turned out to be an incredibly good under-the-radar signing.