Grading the Flyers at the NHL All-Star break 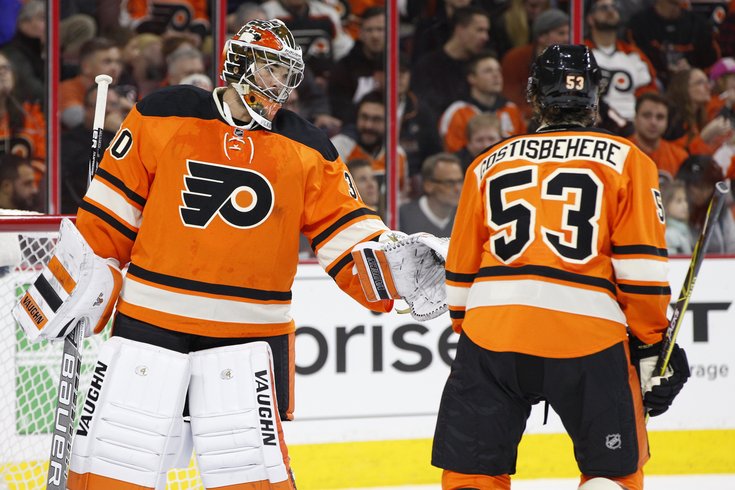 Goalie Michal Neuvirth and rookie defenseman Shayne Gostisbehere have been among the bright spots for the Flyers this season.

The Philadelphia Flyers head into the NHL All-Star break five points behind the Penguins for the Eastern Conference's final wild card spot. That will leave them in a precarious position ahead of the trade deadline, which is one month from Friday.

The season to this point has been an up and down one, but at least over the last two months, there have seemingly been more ups than down. With a rookie head coach in Dave Hakstol, that's exactly the trend you want to see this team following.

As you will see from the grades that follow -- or from their place in the standings -- there is still plenty of room for improvement. And if the Flyers (21-18-8) hope to make the postseason, those are improvements that they'll definitely need to make.

The Flyers have been one of the lowest-scoring teams in the league this season, currently ranking 27th in the NHL with just 2.28 goals per game. And that's despite the fact that they put more shots on net than all but 10 other teams. Clearly, finding the back of the net has been a problem for them this year.

There have been bright spots, however. Sean Couturier, for example, has gone from being a solid penalty killer and strong defensive forward to being a legitimate two-way player and scoring threat. Unfortunately, just as he was heating up, the former 8th-overall pick injured himself and has been sidelined since the team's Jan. 19 loss to the Leafs. Fourteen of Couturier's 22 points this season came in the 14 games prior to his injury. He also has a team-best rating of plus-eight.

And Jake Voracek, who recorded a career-high 81 points last year but struggled early this season, has seemingly returned to form. His two goals against the Capitals on Wednesday raised his point total to 36 (8G, 28A) on the season, three behind captain Claude Giroux for the team lead. He has also now recorded 31 points (8G, 23A) in his last 31 games -- and 10 in his last seven -- after tallying just five in the first 16 games of the season.

Still, this unit has struggled as a whole, and considering the number of close games they've been in this season, a goal here or there could ultimately be the difference between making the playoffs or not.

He's not having his best statistical season ever, but Giroux is leading the team in points and is their lone representative for this weekend's NHL All-Star Game in Nashville. He also centers a line -- with Wayne Simmonds and Jake Voracek -- that is responsible for a huge percentage of the Flyers' offense. Furthermore, Giroux is one of the best face-off men in the league, something that can be quite useful when you have wingers that can score ... and score quickly.

Umberger has just six points this year -- all assists -- and hasn't found the back of the net in over a year. If you've watched much Flyers hockey this year, I doubt you'll put up much of a fight over this one.

Defensively, there have been some good things from the Flyers as a whole. And -- along with the play of their netminders -- is the main reason why the team could wind up as buyers (or at least not sellers) as the clock ticks closer to the Feb. 29th trade deadline.

In 29 games since being called up from the Phantoms, Gostisbehere has recorded 22 points, which is the best among his defensive teammates and sixth best on the team. He also a trio of game-winning goals for the Flyers, and when compared to his fellow rookie blue-liners, the 22-year-old stands above the rest.

And it's not just fellow rookies that have been outplayed by Gostisbehere...

It's not that MDZ has been all that terrible on defense. He hasn't been great, but that's not his role on the team. He's supposed to help the team offensively, and with just three goals (two of which came in the same game) and nine assists that season, he hasn't really been pulling his weight in that department. Last season Del Zotto, whose minus-eight rating is tied for the worst rating on the team, recorded 32 points in 64 games. So far this season, he has just 12 in 45 games.

Part of the reason the Flyers have been able to stay in the Eastern Conference wild-card race — despite their 27th-ranked offense — has been the play of their one-two punch in net. Combined, “starter” Steve Mason and “backup” Michal Neuvirth are allowing 2.62 goals per game, 15th in the NHL. That number becomes much more impressive when you consider the Flyers are allowing the 32.3 shots per game, second-worst in the NHL.

As you can see from their stats, Neuvirth has been the better goalie, statistically speaking. His 2.14 GAA is the 9th best in the league, but his .933 save percentage … well, that’s second to none. It does, however, seems like the Flyers play much better in front of him than they do when Mason is in net — and a lot of the scoring seems to come with his team down a man. In fact, nearly one-third of the goals (24 of 75) that Mason has allowed this season have come on a penalty kill. Neuvirth, on the other hand, has allowed just 11 power play goals this year, despite the fact that he’s seen four more shots in those situations (119 to 115).

It’s strange, the difference between the two in PK situations. Neuvirth’s .908 save percentage is third best in the NHL among the 29 goalies who have seen at least 100 shots when opponents have at least man advantage. Mason’s save percentage (.791) is dead last, and the next closest, Pekka Rinne, is 44 points better.

And then you isolate their even-strength numbers, there’s been almost no difference between the two. Neuvirth (.937) and Mason (.935) rank 8th and 9th, respectively, in the NHL among goalies who have seen at least 400 even-strength shots.

Since Mason’s health has been somewhat of a problem in the past, it was wise of the Flyers to bring in a qualified, veteran backup goalie. So far, it seems like they couldn’t have made a better choice.

The season didn't get off to a great start for rookie coach Dave Hakstol, but the Flyers have seemed to right the ship. After starting 7-10-5, the Orange and Black have gone 14-8-3 in their last 25 games. Some of that could coincide with the team's decision to call up Gostisbehere or perhaps with some of the line changes Hakstol has tinkered with throughout the season.

So far, Hakstol gets a passing grade, but he can really earn some extra credit if he's able to carry over the momentum his team gained by beating the Caps on Wednesday into the second half of the season. If nothing else, he's been better in his first season than Craig Berube was up to this point last year.

However, I'm still not really sure what to make of all those too-many-men penalties...

Ron Hextall is a boss. He improved the roster despite cap limitations by bringing in Neuvirth and Evgeny Medvedev, he rid his team of Vinny Lecavalier's monstrous contract and made the right decision by promoting Gostisbehere. And the players he drafted, although not yet ready for the NHL, have been playing quite well.