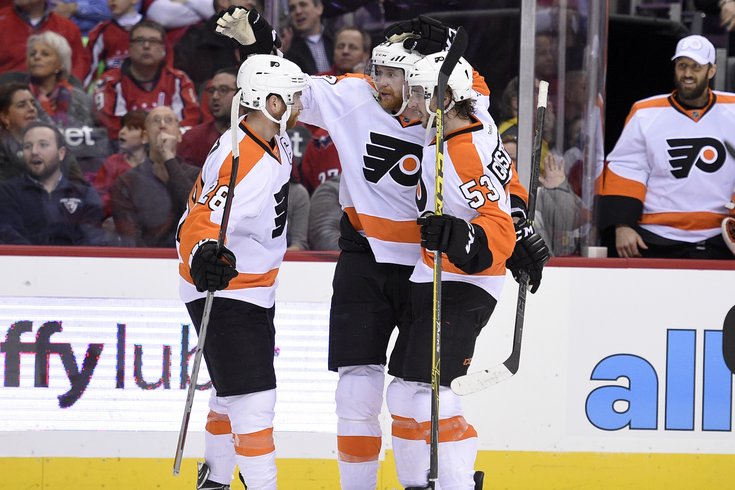 With their 4-3 overtime loss to the Philadelphia Flyers on Wednesday night, the Washington Capitals became the most recent victim of the winter storm that blanketed the Mid Atlantic with snow over the weekend.

Jake Voracek scored twice, including the game-winner just 38 seconds into overtime, as the Flyers (21-18-8) handed the NHL's best team its first loss in 12 games -- and first at home since November 19. It also snapped a three-game skid for the Flyers, who will now head into the all-star break with some momentum.

The goal was his eighth of the season and third goal (fifth point) in the last three games.

Here are my observations from the game.

•    A sluggish start by the Caps allowed the Flyers to get out to an early lead on a pair of first-period goals, a rare occurrence considering rookie coach Dave Hakstol’s team averages just a little over two goals per game.

Flyers lead after 1st period for just 6th time this year. They were 4-0 until Thursday’s 4-3 loss to PIT. They also led 2-0 in that game.

At least part of the reason for the way the game started was the fact that the Capitals were playing a game for the first time since last Tuesday — the blizzard caused their games on Friday and Sunday to be postponed — and were limited in ice time due to the snow.

•    The Flyers took advantage of Washington’s slow start, even if they eventually surrendered that lead. Had it not been for those two early goals, this could have been a blowout.

The first goal, a power play goal from Brayden Schenn, came less than five minutes into the game and was the forward’s 12th of the season. Wayne Simmonds (15) and Shayne Gostisbehere (13) picked up the assists. For the Flyers, it was their seventh power play goal in their last six games.

Baby Schenn puts the flyers on the board 6 seconds after the Tom Wilson penalty. #BellLetsTalk pic.twitter.com/zT3Lbkaq3k

Ryan White made it 2-0 midway through the period after terrible turnover by Evgeny Kuznetsov.

White on the one-timer! pic.twitter.com/jh7ptM9S3j

Kuznetsov gets one of those fancy backhand passes out to the slot and it pays off.... for Ryan White. #BellLetsTalk pic.twitter.com/m2dbWakc9k

•    Unfortunately for the Flyers, Schenn’s goal was their only score with the man advantage. They came up empty in each of their next four opportunities and finished 1-for-5 on the night. On the other hand, their 26th-ranked penalty killing unit was never really tested by the Capitals’ top-ranked power play. The Flyers’ lone penalty of the night —- for too many men on the ice —- came late in the first period, and they were able to kill that off. With Sean Couturier (lower-body injury) still out, limiting penalties is huge.

•    The Caps recorded the first 11 shots of second period. After looking nothing like the team their record suggests they are for the first 20 minutes of the game, the first-place Capitals were unstoppable for the much of the next 20 minutes. They not only put 11 shots on net before the Flyers recorded their first, but they also put two in the back of the net, erasing their opponent’s two-goal lead and negating the effects of the rust they showed in the first.

Michal Neuvirth was able to keep Washington off the board on their first seven shots, but with 12:21 left in the 2nd, Andre Burakovsky cut the Flyers’ lead in half. And then, 55 seconds later, Nicklas Backstrom tied the game for the Capitals.

•    The final six shots of the second period, however, all belonged to the Flyers. Their first may not have come until nearly 14 minutes had gone by, but the final six minutes of the period belonged entirely to the visiting team. And after several chances in a row, all of which were turned away by Holtby…

…the Flyers final broke through with 2:21 left in the period. Voracek snuck one past the Caps goalie, who was called for a pair of minor penalties in the second half of the period, to give his team a 3-2 lead.

Jake the snake with a sneaky shot! pic.twitter.com/6oRH1Z6zcQ

That's what I'm talking about Jakey! Sick work in the dot from Claude too. #Laser #BellLetsTalk pic.twitter.com/fNapGQDkSE

That goal was only made possible by Giroux’s clean win on the draw. His ability on the face-off — he’s up there with the best in the game — is one of the most underrated aspects of his game, mainly because it gets lost among the plethora of other skills he brings.

•    Michal Neuvirth was in net for the Flyers for the third game in a row. That’s because Steve Mason — despite the team previously saying he wasn’t hurt — is suffering from a lower-body injury. The team recalled Jason LaBabera from the Phantoms to back up Neuvirth Wednesday night, but Mason doesn’t seem too concerned. At the Flyers’ morning skate prior to their game against the Caps, Mason told reporters the injury was “not too serious” and that he wanted to “take advantage of some rest.”

That makes sense, even if you don’t agree with the Flyers’ refusal to admit the injury on Tuesday. Mason may not be “injured” and instead dealing with some lingering pain that will only heal with rest. And considering how well Neuvirth has been playing — there’s been little difference between the two this season — coupled with their five days off for the forthcoming all-star break, it’s the perfect time to let Mason heal up. Think about it — if it was something more serious, would he have been available off the bench each of the last two games?

•    It has now been over one year since R.J. Umberger’s last goal, which came exactly one year ago Wednesday. He had a golden chance in the first period against the Caps.

The Flyers now head in to the all-star break, with only their captain heading to Nashville for the weekend. Their next game will be on Tuesday night at the Wells Fargo Center when they host the Montreal Canadiens.