Hockey fans, prepare to have your minds blown 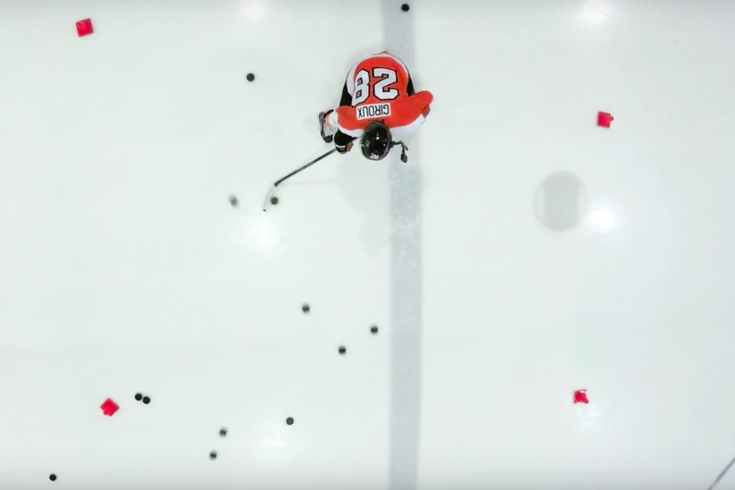 Claude Giroux plays the hockey equivalent of "Frogger" during the "NHL After Dark" teaser.

As someone who never played competitive hockey at anything resembling a high level, some of the moves those guys make with their sticks continue to amaze me long after watching them. Unfortunately, you don't always get to see those skills in action, often because there isn't the space or the time during play to pull them off.

This weekend's NHL All-Star Game, however, is one of the times you can sit back and appreciate just how talented the players are. And ahead of the annual celebration of the game's best, the NHL and GoPro announced a new series called "NHL After Dark."

The 11-part series will "give hockey fans an immersive look at what happens on the ice during late night training sessions," and will feature Philadelphia Flyers captain Claude Giroux, as well as other NHL stars like Evgeni Malkin, Cory Schneider, Duncan Keith, Tomas Tatar, Henrik and Daniel Sedin, and Gabriel Landeskog.

On Tuesday, the NHL released a teaser for the show, and the video -- shot entirely on GoPro cameras -- offers a whole new perspective on the game of hockey. It's mesmerizing.

New episodes will be released every Wednesday for the rest of the 2016 season, starting on Wednesday, Feb. 3rd. No word yet on when Giroux's episode airs, but first up will be Tomas Tatar of the Detroit Red Wings.

But wait, it gets better. Players will also be wearing GoPro cameras during All-Star weekend, according to USA Today:

GoPro's action cameras will be worn by players and mounted around the rink to deliver live high-definition footage and images during Saturday's 2015 Honda NHL All-Star Skills Competition (7 p.m. ET/4 PT on NBCSN). GoPro cameras will also be used for Sunday's all-star game, too, (5 p.m. ET/2 PT on NBCSN) with the possibility that some players and referees might wear them during the game.  [usatoday.com]

If the live feed looks anything like what's in the above video, the three-on-three format may have a challenger for the best change to the NHL All-Star Game.