Such groups have become increasingly popular across the river in recent years. 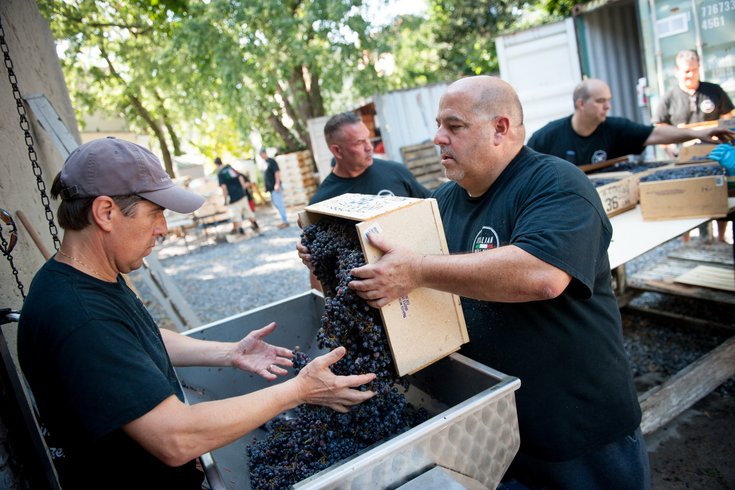 Mario Flamini, left, and Dan Angelozzi load grapes into the crusher at the Vino Degli Amici warehouse. Members of the club spent the day crushing 12-and-a-half tons of grapes and transferring them to tubs as the first step in the wine fermentation process.

On Saturday morning, 28 men gathered outside a South Jersey warehouse to crush 25,000 pounds of grapes.

Stacked in the yard on grass and gravel were 680 36-pound wooden boxes of grapes arranged in 17 stacks. The men were using hammers and crowbars to pry the lids off the boxes, so they could dump the grapes into two automatic crusher-destemmers.

As the machines roared, Guy Ferranti strolled through the crowd looking like a football coach on the sidelines carrying his laminated play cards.

Ferranti is the CEO of the Vino Degli Amici wine club, which loosely translated means “wine among friends.” On his cards Ferranti had printed out a diagram of the schedule for the two work crews manning the crushing machines. Ferranti had also printed out a layout of the warehouse showing exactly where each of the 17 maroon, 700-liter tubs should sit, and what the contents of each tub should be, in terms of five different grape varieties.

For instance, the first stack of grapes that went through crusher No. 1 were 40 boxes of Brunello, enough to make two 50-gallon barrels of the American version of the red that’s the pride of Italy’s Piedmont region.

Meanwhile, the guys around crusher No. 2 were crushing 40 boxes of Zinfandel to make a couple of 50-gallon barrels of red Zin.

On his play cards, Ferranti listed the club members working as “crushers,” “stackers,” “stemmers” and “tub tenders.” Ferranti was listed as the “clipboard carrier.”

There’s one advantage to being the brains of the operation.

“My hands stopped getting dirty years ago,” said Ferranti, who describes himself as a “supply chain” expert for a major corporation. 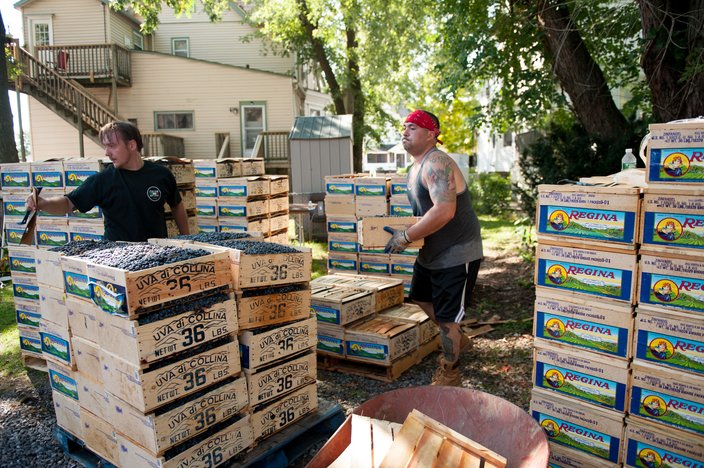 Matthew Mahoney, left, and Frank Cocco, members of the Vino Degli Amici wine club, carry crates of grapes toward the assembly line at their warehouse. Earlier in the day, members had picked up their annual haul at Procacci Brothers in South Philadelphia.

The wine club was established in 2005 by Ferranti and his pal Danny Angelozzi, in Angelozzi’s garage. They started by making four barrels, or about 200 gallons of wine.

But Angelozzi, a car dealer who sells BMWs in Princeton, N.J., had bigger ambitions.

“When I dive into something it’s 100 percent,” he said. And, as opposed to Ferranti, Angelozzi likes to get his hands dirty, as he demonstrated on Saturday by dumping numerous boxloads of grapes into the chugging crusher No. 1.

“It’s a beast,” Angelozzi raved about the machine that was the biggest model he could find.

Since its founding, the club has grown from two to 22 official members, along with a half-dozen helpers and hangers-on. The club operates out of a South Jersey warehouse, the location of which they’d like to keep private.

“We try to get everybody who has a significant trade. We have an electrician on staff in case anything goes wrong.” – Guy Ferranti, CEO of the Vino Degli Amici wine club in South Jersey

On Saturday, the wine club crushed enough grapes to make more than 2,000 gallons of wine, enough to fill 40 50-gallon barrels.

Wine clubs have become increasingly popular in recent years in South Jersey for practical reasons. If you’re a member of a wine club, you can pool your cash to buy expensive winemaking equipment and supplies, as well as share the labor. It also helps to have a large space suitable for winemaking. Such as the Vino Degli Amici clubhouse, which features posters on the wall from The Sopranos and The Godfather movies, as well as portraits of Frank Sinatra, Dean Martin and Sophia Loren.

Like the Mafia, in order to join the club, it helps to be an Italian American. But “we honor diversity,” Ferranti said.

To prove that point, Howard Ackerman piped up.

“I’m the token Jew,” he said. “They only invited me in the club because I had a forklift.”

“Joe Yac,” short for Yacovitch, volunteers that he’s the only Polack. Club members range in age from Domenic Stalfire, who’s 81, to his 18-year-old grandson, who of course, is also named Domenic.

Rather than ethnicity, the club has more practical concerns when recruiting members.

“We try to get everybody who has a significant trade,” he added, so they can handle any technical problem that arises during winemaking. “We have an electrician on staff in case anything goes wrong.”

And something always goes wrong. 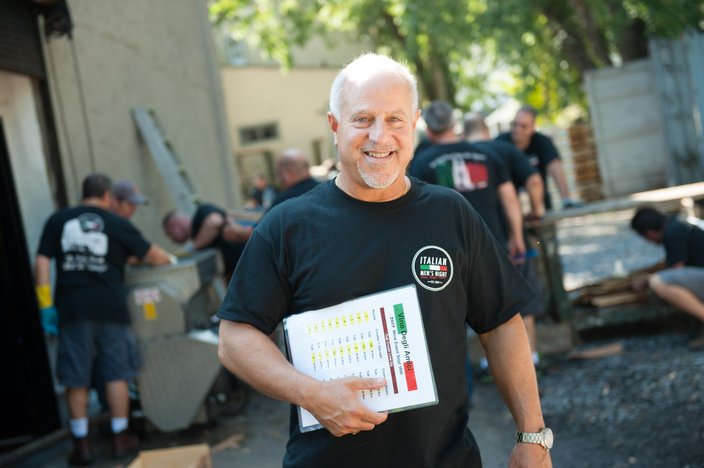 Guy Ferranti holds the charts that outline this year's winemaking plan for members of the Vino Degli Amici wine club. Formed in 2005, the club's name is loosely translated as “wine among friends.”

For example, on Saturday, it could have been a disaster around 11:30 p.m. when the guys feeding grapes into crusher No. 1 smelled burning rubber.

A fan belt had gotten twisted and turned, and it was loose. But fortunately, the day before, Angelozzi had the foresight to buy extra fan belts to fit both machines.

“I have to think of everything,” he said. As in everything that could go wrong.

The crusher was out of operation for about 15 minutes while the work crew led by the Flamini brothers – Mario, David and Dan – changed the fan belt.

A crusher-destemmer is a stainless steel box on wheels with two metal worms inside turning in opposite directions. The machine pumps a steady stream of mashed grapes out the front through a thick hose. And out the back it deposits a tangled pile of sticky green stems.

To finance the club, the guys hold “Italian Men’s Night” events throughout the year such as the Feast of the Seven Fishes, a Valentine’s Day dinner, and a bus trip to New York, for the annual San Gennaro festival in Little Italy.

“It’s all one great big family,” said Roland Priest, the newest member of the club. He got hooked when a member of the gym he goes to shared with him a bottle of club wine.

One taste of homemade Petite Sirah and Priest was hooked.

“I want to get in,” Priest told his pal.

“I didn’t even know it existed,” he said about the club. “This will be my fourth year.”

When his daughter got married, Priest made 17 cases of wine at the club to give away at the wedding.

The club’s annual winemaking began officially at 4 p.m on Friday when several club members made the fall pilgrimage down to the Procacci Bros. warehouse at Pattison Avenue and South Lawrence Street in South Philly. It’s the only place left in the city where you can still buy wine grapes.

Angelozzi and Ferranti were checking out the grapes imported from California before they were loaded onto two rented 48-foot-long Ryder trucks. Every year, the wine club buys only Pia and Regina brand grapes from Madera, north of Fresno. This year, Angelozzi and Ferranti bought five varieties – Zinfandel, Cabernet Sauvignon, Petite Sirah, Brunello and Merlot.

Over the years, club members have become fanatical about using commercial wine presses to extract more juice from the grapes.

A pneumatic grape press is a fat rubber balloon that sits inside a wooden basket filled with crushed grapes. You can use either water or air pressure to expand the balloon, so it presses the grapes against the wooden slats, to produce an increasingly dark stream of juice.

The wine club owns three giant presses the same size as the ones used at commercial wineries. Switching from water pressure to air pressure, club members have upped their juice extraction over the years from 2½ gallons to 3 gallons from every 36-pound box of grapes.

While Lenny Procacci was filling out the club’s sales slip, he talked about his visit to the wine club last year. And how he watched as Angelozzi and Ferranti kept raising the air pressure on the press, to extract more juice.

Finally, “the thing just blew,” Procacci said. A huge blast of squished grapes shot “straight up in the air and came down and landed all over my shirt,” Procacci said. The grape shower also splattered five other guys standing up to 10 feet away. 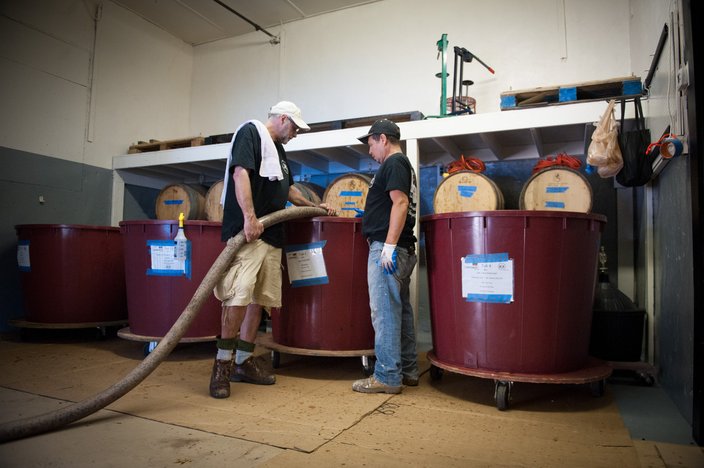 Greg Curry, left, and Mario Flamini, members of the Vino Degli Amici wine club, watch as grape must is transferred into giant tubs.

On Saturday morning, the guys gathered outside their warehouse at 7:30 a.m. to set up. Around 9 a.m., Angelozzi called the club members together for a brief pregame huddle.

All the guys were wearing black T-shirts featuring a depiction of the ancient Roman Coliseum and the club’s official slogan, “We Only Drink What We Squeeze.”

“Is everybody here?” Angelozzi asked, getting their attention.

“We’re here to have a good time,” Angelozzi said, before advising everybody to “pull their weight.”

Then, he asked for a moment of silence to honor a couple of club members who passed away in the last year, Al Ferraro, the oldest member, as well as “Cousin Willie” Angelozzi.

“You have your assignments,” Ferranti told the club members.

The young studs jumped on the trucks, to start unloading. The old guys were assigned to stem duty, which meant collecting the stems in tubs when they fell out of the crusher-destemmers.

“All the guys over 60, don’t break your balls,” Angelozzi advised.

“That’s half the crowd,” somebody yelled.

The two work crews manning the two crusher-destemmers seemed to be engaged in a race, while trash-talking each other.

“We have Sicilians on one side and Abruzzese on the other,” Ferranti explains. There’s always plenty of rivalries and good-natured bickering.

The hoses from the crusher-destemmers filled the 700-liter vats with steady streams of cold, foamy grapes. The next step, Ferranti said, will come when he adds to the grape mash a potent mixture of cultured yeast, nutrients, an energizer, and a shot of lemon juice that acts as a catalyst. “It’s like a steroid,” Ferranti said.

It takes a week to ferment the juice in the vats. Volunteers come in twice a day to punch down a grape cap that forms on the top of the mash. By the third day, the air is so pungent with fumes that they need to open all the doors and blast some big fans, to keep the guys from getting goofy.

Angelozzi’s daughter, Alexa, was slicing rolls for the roast pork and eggplant sandwiches her mother made for lunch.

You have to feed the help, Alexa explained. Especially Italian men, she said. “Or else they get ornery.”