Former Guggenheim family property in Bucks County on the market for $2.5 million 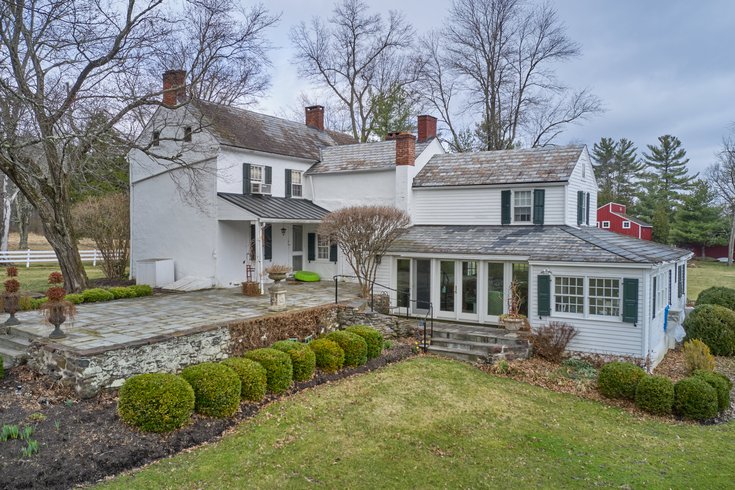 A 26-acre Upper Black Eddy, Bucks County estate which was once a summer retreat for the Guggenheim family is currently on the market for $2.49 million.

A 26-acre estate in Upper Black Eddy that was once a summer retreat for the wealthy, philanthropic Guggenheim family is currently on the market.

"It is very rare to find a 19th century home, this private and secluded with an American pedigree," said Arthur Mazzei, the real estate agent currently in charge of the property.

The four bedroom, three-and-a-half bathroom home, with almost 3,500 square feet, is 30 minutes from New Hope and 10 minutes from Frenchtown, New Jersey. It's hidden in a patch of forest that sits above the Delaware River.

The property also includes a large outdoor swimming pool, a garage with a two-bedroom apartment above it, a one-bedroom guest house and the ruins of a historic barn that has been repurposed as an entertainment area.

The main structure, which has been well maintained over the years, was built in 1870 – 23 years after Meyer Guggenheim immigrated to Philadelphia from Switzerland.

From the outside, the plain stucco and clapboard structure may look modest, but it's one of several summer properties the family has purchased over the years.

Meyer's American story began when he first arrived in Philadelphia in 1847. He worked as a peddler who sold stove polish and other wares. The city is also where all 10 of his surviving children, seven sons and three daughters, were born.

Eventually, Meyer decided he could make more money manufacturing the polish himself. This turned out to be profitable and he was soon able to invest in other ventures.

By the 1870s, Meyer was importing textiles from his native Switzerland. In 1881, he broke ties with his business partner Morris Pulaski and moved to New York City to start a new company called M. Guggenheim's Sons. After finding more success, Meyer and his sons began investing in mining operations in Colorado.

The group then got into the metal processing business with a new venture initially called the Philadelphia Smelting and Refining Company. It would eventually come to dominate the industry.

When Meyer died in 1905, he passed his wealth onto his sons, who carried on his legacy in the world of mining. But they didn't stop there. Simon was briefly a U.S. Senator for Colorado, Isaac supported a New York City hospital that served African Americans and Solomon built a large personal collection of modern art.

In 1956, Solomon commissioned architect Frank Lloyd Wright to design a New York City museum to house the collection, which is likely what most Americans associate the family name with today.

Those interested in viewing or buying the property can reach Mazzei at (610) 428-4885 or art@addisonwolfe.com.