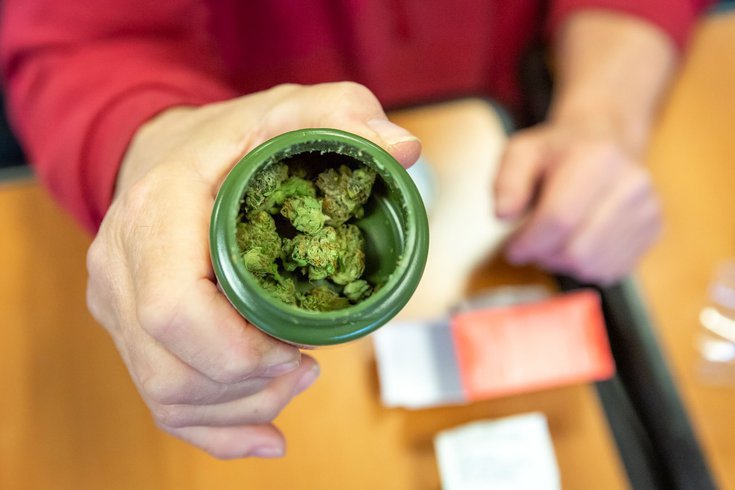 Adults ages 21 and older in New Jersey can now legally purchase marijuana in the state for recreational purposes.

Recreational marijuana sales officially began in New Jersey on Thursday, a year and a half after residents of the state voted in favor of a ballot question authorizing the market.

The legalization of adult-use cannabis sales in New Jersey and its proximity to 4/20 – the unofficial U.S. holiday for marijuana – made the matter a prominent topic on several late night shows' opening monologues Wednesday.

"The Late Show" host Stephen Colbert joked that the legalization of recreational weed in New Jersey means that New Yorkers "will have to do the unthinkable" and drive to the state on purpose.

Colbert also made fun of New Jersey for waiting until Thursday to legalize recreational pot sales instead of capitalizing on the popularity of 4/20.

The late night host said that New Jersey's consideration of banning police officers from smoking marijuana while off-duty is an attempt to "defun" the police.

"I gotta tell ya, guys, you just wait until you try (marijuana). You're gonna love it," Corden jokingly said.

"Just be careful people from New Jersey, because if you smoke too much weed, you might accidentally forget about a bunch of important stuff you need to do," Corden said, emphasizing "forget about" in an attempt at mimicking a New Jersey accent.

Like Colbert, "The Tonight Show" host Jimmy Fallon mocked New Jersey for waiting until Thursday to begin allowing adults to purchase recreational weed instead of starting on 4/20.

Starting Thursday, seven operators that already have medical marijuana dispensaries will be allowed to sell recreational cannabis. Three of the operators are in South Jersey, three are in North Jersey and one is in the central part of the state. Their 13 combined locations are as follows:

The state has estimated it will have as many as 800,000 recreational marijuana consumers, along with thousands of others who will travel out of state to obtain the drug.

Roughly two-thirds of New Jersey residents voted in favor of decriminalizing and legalizing adult-use marijuana on a ballot referendum in the 2020 election. The referendum succeeded after several legislative efforts failed over the past few years.