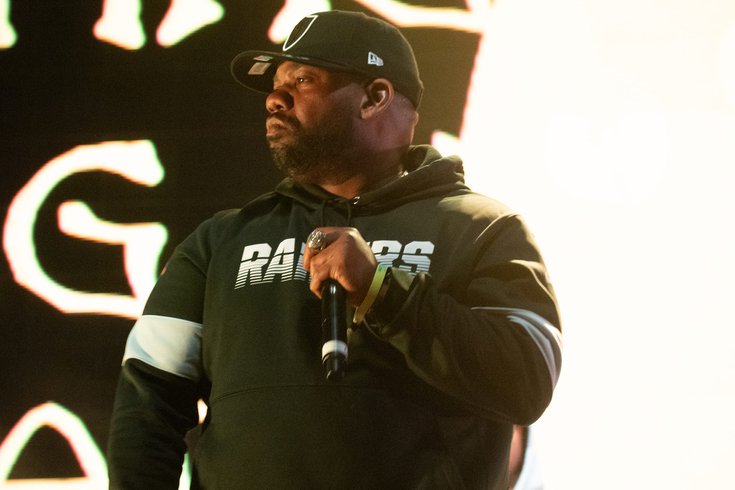 Wu-Tang Clan's Raekwon is partnering with Diadora and Foot Locker to make a Philadelphia-themed sneaker to benefit 20 musicians in the city. This file photo was taken of Raekwon performing with the group in California.

A member of one of the most influential hip-hop groups of all time is teaming up with his favorite sneaker brand to provide more opportunities to musicians in Philadelphia and five other cities across the country.

Wu Tang Clan's Raekwon is collaborating with Foot Locker and sneaker maker Diadora for a project called Community Linx. The initiative aims to provide musicians in underserved communities with the equipment and opportunities they need to further their careers, Sneaker News reported.

Corey Woods, as the rapper is known off-stage, said the project is about bringing music and sneaker culture together to strengthen communities.

"When you see people that are trying to do something better for themselves, they got to have somewhere where they can turn to," he told the Philadelphia Tribune. "We know how tough it is to come out of some of these communities … if you don't have any motivation or any big brother or big sister showing you."

The first releases in the collection are two New York City-themed versions of the Diadora N9002 sneaker. One is blue and orange and the other is black and gray.

Community Linx also will be coming out with shoes in honor of Detroit, Chicago, Los Angeles, Houston and Philadelphia. The sneakers will be available in men's sizes at Foot Locker and Champs for $120 later this month.

Proceeds from the shoe sales will be used to provide resources to up-and-coming musicians in each community, including face time with Raekwon.

While Wu Tang is not from Philadelphia, the city has played an important role its musical career, another group member, Masta Killa, told PhillyVoice in the run-up to their 25th anniversary tour in 2019.

"When we first started 25 years ago, Philly was our strongest market when we would go on the road," Masta Killa said. "Philly always repped hard for the Wu, and we love Philly. That was our first stop on the map back then. We went straight to Philly."

Diadora, the Italy-based footwear brand moved its North American headquarters here from Midtown Manhattan in 2018. The company's office is in the Bok Building in South Philly.

Wu Tang will be returning to the area to play a show with Nas at at 8 p.m. on Thursday, Sept. 8, at the Waterfront Music Pavilion in Camden.

A few ticket options are currently available for presale through LiveNation, but they will be available for the general public starting at 10 a.m. on Tuesday, April 26.