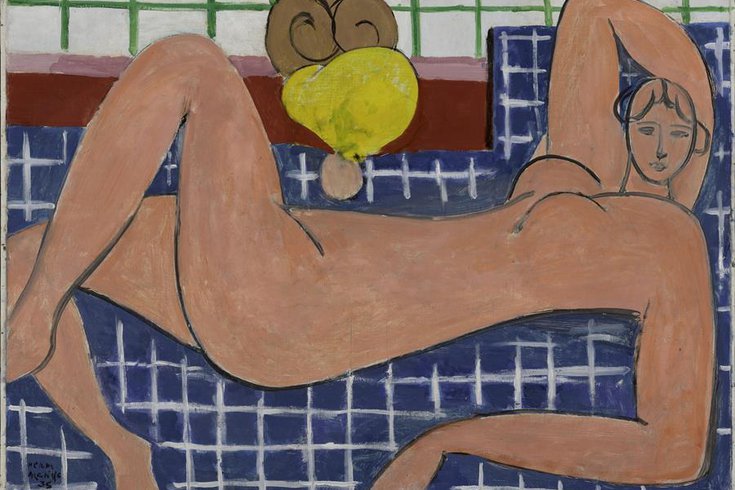 'Matisse in the 1930s' will premiere Oct. 19 at the Philadelphia Museum of Art and remain open through January 2023. Above is a photo of Matisse's 1935 painting 'Large Reclining Nude.'

The first major exhibit celebrating the artwork that rejuvenated Henri Matisse's career in the 1930s will make its global debut in Philadelphia this fall.

The art museum will be the lone venue in the United States to host the exhibit. Matisse's artwork will then move to the Musée de l’Orangerie in Paris and Musée Matisse in Nice, France next year. Each museum has a unique connection to Matisse's art and already houses works of his from this period.

The exhibit will showcase more than 100 pieces Matisse created in the 1930s, including paintings, sculptures, drawings, prints, illustrated books, feature documentary photographs and films. They have been curated from public and private collections in the U.S. and Europe.

The exhibit will highlight the changes in artistic style that Matisse adopted in the 1930s, which led to a career revitalization. The French modern artist learned different methods of working across easel and decorative painting, sculpture, printmaking and drawing.

By 1930, Matisse already had achieved a critically-acclaimed career, but critics said he had hit a creative slump. By the late 1920s, Matisse had created little-to-no new artwork for a couple years.

"The Dance" is closely associated with Matisse's return to a modernist style in the 1930s. The artist began using photography to document the process of building his designs and to test his own reactions to his artwork. He also started using pre-colored cut paper to plan compositions, pushing him toward a style of flat tones and bold shapes that gave his creations a fresh look.

Matisse returned to France with a new perspective that allowed his career to flourish once again.

A section of the exhibit will focus on Matisse's Barnes Foundation mural, which was his only opportunity to create a painted decoration for a specific architectural space.

This section also will include a variety of artistic inspirations for the mural that have been lent by the Musée Matisse, including the nearly 11-foot-tall "Drawing at the Scale of the Central Figure of Barnes Mural." There also will be a short film showing Matisse's work on the mural in his Nice workspace.

"Because this transformative decade in Matisse's career has never been treated in a standalone exhibition before, visitors will have a rare opportunity to immerse themselves in the very process through which Matisse generated a new creative approach and outlook in the later part of his career, while also witnessing the dramatically revitalized production that followed from his eventful visit to Philadelphia in 1930," said Matthew Affron, the Philadelphia Museum of Art's modern art curator.

"Between works on view at the Philadelphia Museum of Art and complementary holdings down the street at the Barnes Foundation, Philadelphia this fall will be an especially exciting city in which to experience Matisse's extraordinary art."