The new release is called "See You in Chemistry." Every single song the group has ever written is a reference to either "Drake and Josh" or "iCarly." 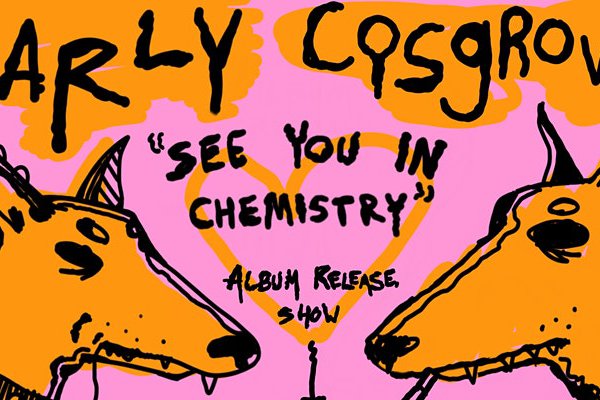 There are lots of midwest emo bands in Philadelphia, but there aren't many as dedicated to a single theme as Carly Cosgrove.

The group which describes itself as "Philly nostalgiacore" is named for actress Miranda Cosgrove and the titular character she played on the tween-centric show "iCarly." They just released their first full-length album "See You in Chemistry" on Wax Bodega last month.

Every track title the band has ever written is a reference to either Cosgrove's show or "Drake & Josh," both of which were created by Dan Schneider.

But the band does not approve of the producer, who has been accused of having angry outbursts on set and mistreating some of the young stars he casted.

"F**k Dan Schneider," is the first thing written on the group's Bandcamp profile.

The record is a sad but energetic 45 minutes of pop-punk punctuated with mathy guitar leads and a sharp, reedy vocal performance.

At times it sounds similar to Joyce Manor and Algernon Cadwallader, which makes sense because the album's producer Joe Reinhart has worked with both of those bands.

The new release is not short on Schneider references.

"Really Big Shrimp," the lead single, is a reference to a "Drake & Josh" television movie which first aired in 2007. They also uploaded an acoustic rendition to YouTube today.


The rousing, punchy guitar riff that begins the track may be the catchiest on the album. It fades in under a layer of well-crafted compression.

Much of the track is written with relatively slow, pulsing rhythms that make it feel like an extended hardcore breakdown in spite of its jangly, clean and maybe even upbeat tone.

It also includes a soaring trumpet section. While Carly Cosgrove is far from the first emo band to utilize brass, it feels particularly tasteful here. Instead of blasting a straightforward riff over the top of the band, the trumpet flitters around under the guitar in an almost atonal way that furthers the soundscape as a whole.

There's also the song "Rue the Day," which is named for what's perhaps the most iconic line uttered by "iCarly" side character Nevel Papperman.

He's not the only eccentric nerd from the show referenced on the album. The album's second track is named after Noah Munck, the actor who played Gibby, an eccentric nerd who often takes off his shirt for no apparent reason.

Despite the memeified song titles, the new album features pensive and introspective lyrics from frontman and guitarist Lukas Naylor.

“Chronologically, this record comes after a point where I thought I got a lot of personal growth done,” he said. “But at a certain point I just found myself hitting a wall, I felt like I was moving backwards."

That album's last track "See You in Chemistry" is perhaps the best example of this dualism on the album.


The title is a reference to what Josh awkwardly tells his on-and-off romantic interest Mindy when she confesses his love to him.

But Naylor said it's also a reference to his own feelings and the neurochemicals that govern human emotions. The title is also supposed to be a glance to the future, when he hopes things will be better.

“The idea behind the title is that I’m going to be someone else later when I figure things out,” Naylor said.

The nearly eight-minute dirge is by far the most compositionally ambitious on the album.

This is the track where the rhythm section shines the most. Drummer Tyler Kramer's pounding drums carry the track forward and bassist Helen Barsz, who mostly stays in the pocket on the album, shows off a complex, melodic line in the middle of the track below a subdued interlude.