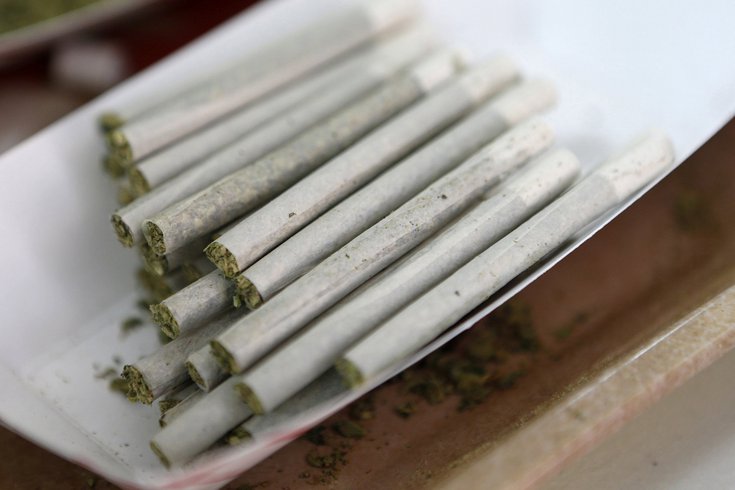 New Jersey voters approved the legal use of recreational marijuana for adults ages 21 and over during Tuesday's election. It became first state to do so in the Mid-Atlantic region.

As the country continues to watch Election Day results, one measure on the New Jersey ballot Tuesday appears to have passed by a wide margin: the legalization of recreational marijuana.

Two-thirds of New Jersey voters supported the authorization of pot for adults ages 21 and older.

The Associated Press called the ballot question Tuesday night. With 62% of precincts reporting, 66.94% of voters were in favor of legalization. All results are considered unofficial until they are certified by state election officials.

New Jersey is the first state in the Mid-Atlantic region to adopt legal cannabis. Recreational marijuana use has not been legalized neighboring Pennsylvania, New York or Delaware.

New Jersey's referendum was projected to pass by a wide margin. It was supported by Gov. Phil Murphy and a group of other legislators who had been pushing for legalization for years.

Legalization still has a ways to go before New Jersey adults can easily purchase and consume marijuana. The amendment simply paves the way for lawmakers to pass a bill governing the rules of a new weed industry.

In some states that legalized recreational marijuana, it took years before residents could actually visit dispensaries to purchase weed. In Massachusetts, it took two years. In Maine, it took four.

Many New Jersey residents and Twitter users reacted positively to the news, though it also prompted a few jabs at the state.

Murphy shared his excitement while the news prompted Bill de Blasio, the mayor of New York City, to urge New York to take the same step.

We did it, New Jersey!

Public Question #1 to legalize adult-use marijuana passed overwhelmingly tonight, a huge step forward for racial and social justice and our economy. Thank you to @NJCAN2020 and all the advocates for standing on the right side of history.

Congrats, NJ! This is an incredible step forward in criminal justice reform and will provide a huge boost to the economy.

New York, you’re up. Let’s get this done.https://t.co/LcqlTdZNgh

Many people reacted in celebration, including Barstool Sports writer Robbie Fox, who posted a NSFW video.

me exactly one (1) second upon returning to new jersey after the legalization of marijuana pic.twitter.com/H0pQKvzzAv

I see you Jersey.

New Jersey votes to legalize the possession, use, and sale of marijuana - NBC

MAJOR UPDATE: THE VOTE TO LEGALIZE WEED IN NJ HAS BEEN WON.

THE POSSESSION, USE, AND SALE OF MARIJUANA IS NOW LEGAL IN NEW JERSEY.

Ahh.... the feeling of waking up in a 420 friendly state 😌#newjerseyweed

Others had a more sarcastic response, including one person who referenced Oregon's vote to decriminalize small amounts of heroin and cocaine.

Oh yay New Jersey legalized weed! If I'm ever forced to return to the US at least I will be able to access weed. Not, you know, healthcare or reproductive care or a basic standard of living or whatever but still. Weed.

New Jersey's gonna have legal weed. Oh great..like we need more bad drivers lol. Coming out of the Holland Tunnel..there's a sign that says "New Jersey Welcomes Safe Drivers"....that's because you ain't got any! <said in Sam Kinison voice> heh

Only good news out of the NE, #Weed is legal in New Jersey. Now folks can be stoned as they witness the decline and fall of Western Civilization

Still, some users struggled to make sense of the legalization when comparing other policies.

I currently live in a state (New Jersey) where Weed is now legal, but you cannot buy Menthol, Mint, or Wintergreen flavored vape products... because that makes sense.

Oh yay New Jersey legalized weed! If I'm ever forced to return to the US at least I will be able to access weed. Not, you know, healthcare or reproductive care or a basic standard of living or whatever but still. Weed.