Politicians, residents talk gun violence – and a lack of hope – in Southwest Philly

At town hall, stories about lost loved ones in a city neighborhood 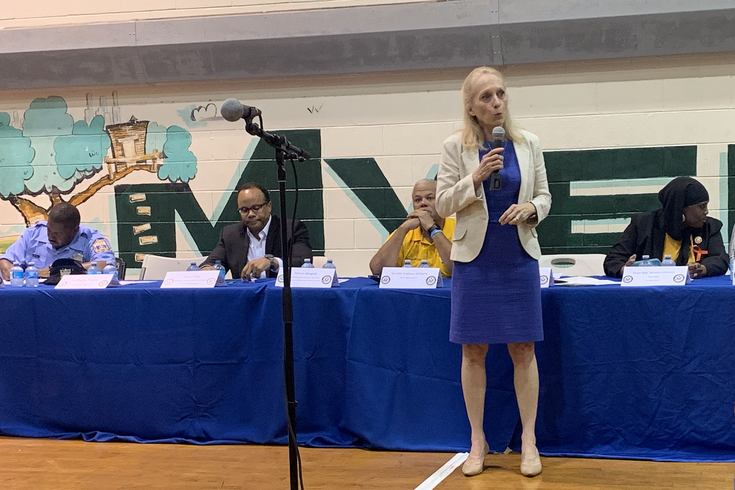 U.S. Rep. Mary Gay Scanlon speaks during a town hall on gun violence on Tuesday night in Southwest Philadelphia. ""Ending gun violence is not an easy task," she says.

Politicians on Tuesday night came to hear about gun violence in Philadelphia and got an earful from residents who shared stories about lost loved ones and lost hope about stemming the deadly tide in their neighborhoods.

Coming less than two weeks after the mass shootings in El Paso, Texas and Dayton, Ohio, the town hall event at the Francis J. Myers Recreation Center in Southwest Philadelphia was convened by Rep. Mary Gay Scanlon, the Democratic congresswoman from the 5th District, which consists of the southern part of Philadelphia as well as all of Delaware County.

The topic of gun violence, and how best to prevent it, is very much in the national conversation right now. That conversation is also being had in Philadelphia (where 14 shootings since Saturday left one dead and 17 injured). According to police statistics, the city's homicide number for 2019 now stands at 202, a 5-percent increase over last year and the highest number as of this date since 2012. Philadelphia has already seen six mass shootings so far this year, including two in Southwest Philly, according to the Gun Violence Archive.

Members of the community had plenty to say on Tuesday night, taking the microphone to tell raw and personal stories of friends and loved ones who became victims of gun violence, and plead for help in their community. One by one, they spoke of a feeling of general despair, a dearth of job opportunities, and a lack of activities for kids in the area, which they felt was contributing to the rising violence.

"We need more resources," said a woman who introduced herself as Leann, adding that she knows people who have been shot. "Coming up with new legislation is great," but it's necessary to increase the police presence and create more jobs in the area, she said.

"This is why people are angry," she said. "The hopelessness that surrounds us every day."

The town hall was a dramatically different discussion of the issue of gun violence than the sort often heard on cable news in recent weeks. President Donald Trump's name was barely mentioned, nor was that of any Democratic presidential candidate. There was some talk about specific policy solutions in regard to gun laws, but more pleas from participants for more resources and more help.

"Ending gun violence is not an easy task," said Scanlon, who was raised in a hunting family, but took up gun control activism around the time of the Columbine High School massacre in 1999. "It requires different approaches in different areas. We've brought together some of the leaders who are working on the issue in this region so folks can hear what they are doing, but we also want to hear from the community what they need, what their ideas are."

The congresswoman noted that the Democratic-controlled House of Representatives has already passed multiple gun reform bills in the current Congress, including a federal background check system and funding for research on the causes of gun violence, and they're planning to pass more. A re-enactment of the assault weapons ban is next on the agenda, although the Republican-controlled U.S. Senate has yet to take up action on any of those measures.

Johnson-Harrell, elected earlier this year as the first Muslim woman in the Pennsylvania state legislature, spoke of how she had lost her father, brother, son, and cousin to gun violence, and went on to found the CHARLES Foundation, which is named for her late son and stands for Creating Healthy Alternatives Results in Less Emotional Suffering.

"We are losing our children to the graveyard and to prison," Johnson-Harrell said.

Mangold, the former Philadelphia police officer who now serves on the Gun Violence Task Force for Attorney General Josh Shapiro, said there is an "epidemic of guns in this city," including the "80 percenters," partially assembled firearms sold at gun shows in order to circumvent various regulations.

Another topic raised was mental health care, as one woman at the microphone noted that while high-profile mass shootings in places like Parkland, Florida, often lead to mental health counselors showing up at schools, a response not typically seen when violence happens in places like Southwest Philadelphia. Goodman, of CeaseFire, noted that in Pennsylvania, two thirds of gun deaths are suicides.

One man said he missed the days of 30 years ago when large groups of kids played sports outside the area of the community center, but panelist Isa Shahid, founder and president of the community group Muslims 4 Humanity, told him that kids these days prefer going to Planet Fitness.

"We sometimes give the youth what we want," Shahid said. "[But] they know what they want."

A man, who introduced himself as a Delaware County resident and a member of the National Rifle Association, offered to provide gun safety training to those in attendance.

Among those participating in the panel was Rochelle Whittington, a non-violence advocate and the mother of Marcus Yates, the 5-year-old boy who was tragically killed by a stray bullet in 1988, just blocks away from the Myers community center. Marcus had a street named after him last year, on the 30th anniversary of his death.

"I hope to see change, I hope to see money poured in here," she said after the event. "I hope to see more people working that live here, and I hope that the government will come in and work on the gun control and the gun laws."

Victoria Miles-Chambliss, a community leader in Southwest Philadelphia with an organization called Empowered CDC, said the town hall was good for discussion and short on solutions.