So far in 2019, six mass shootings in Philadelphia 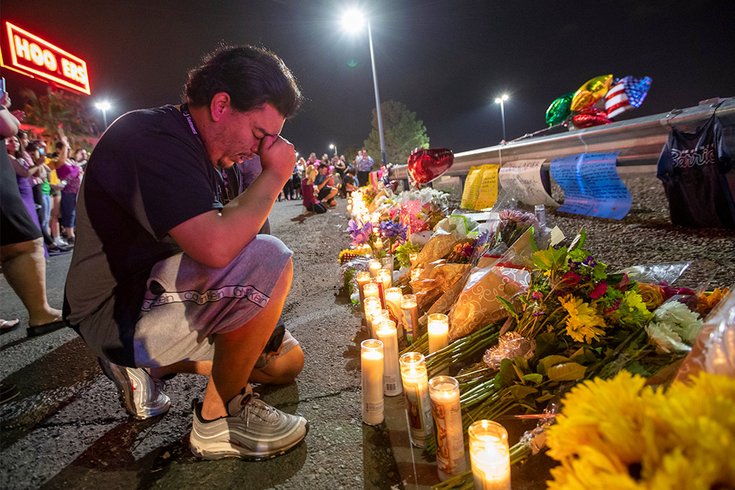 A man prays for the victims near the shooting site in El Paso, Texas, during a candlelight vigil on Sunday evening. Twenty-one people were killed and 25 others wounded on Saturday after a shooting at a shopping mall in the western Texas border city. It was the 250th mass shooting this year in the United States.

After the El Paso and Dayton shootings this weekend, the 255 mass shootings in the United States so far this year have left 275 dead and 1,069 injured.

The domestic terrorism massacre at a Walmart store in the western Texas border city left 22 dead and 24 injured, and just 13 hours later a gunman opened fire in an entertainment complex in the Ohio city, killing 10 and injuring 26, before he was shot dead by police.

In fact, there have been four mass shootings – 2 dead, 21 injured – in the United States since the Dayton violence early Sunday morning, including the two most recent of the 23 mass shooting incidents this year in Chicago, according to the nonprofit gunviolencearchive.org. A mass shooting is generally accepted as an incident where at least four people are shot.

And while Philadelphia has reported far fewer mass shootings this year than Chicago, six mass shootings have taken place in City of Brotherly Love resulting in two deaths and 30 injuries.

In the most recent incident, a 21-year-old man was shot and five other people were injured on July 28 as they prepared to shoot a music video in the 2600 block of Carroll Street in Southwest Philadelphia.

Two weeks earlier, on July 13, 7 people, including a juvenile, were shot and injured at Baker Playground on Lansdowne Avenue in West Philadelphia. There were no fatalities.

In the other Philly incidents:

• A 24-year-old man was shot and killed during a June 16 graduation party in the 2900 block of South 70th Street in Southwest Philadelphia. Five others, including four juveniles, were injured.

• On June 22, four people were injured in a shooting near 24th and Moore streets in South Philadelphia.

• On May 10, five people were injured in a shooting in the 1900 block of North Croskey Street in North Philadelphia.

• On April 21, four were injured during a shooting in the 1500 block of South 31st Street in Southwest Philadelphia.

Philadelphia had half of the 12 mass shootings in 2019, but the deadliest incident was in bucolic State College, in the shadow of Penn State University's main campus. Four people were killed Jan. 24 at an off-campus bar when a gun opened fire on his ex-girlfriend and bystanders. Another person was injured.

In another incident on June 20, 10 people were injured in a shooting at an Allentown bar.

At this pace, America will end 2019 with 430 mass shootings, according to Gun Violence Archive, which notes that would be the highest total since it began collecting gun violence data as an organization in 2013.