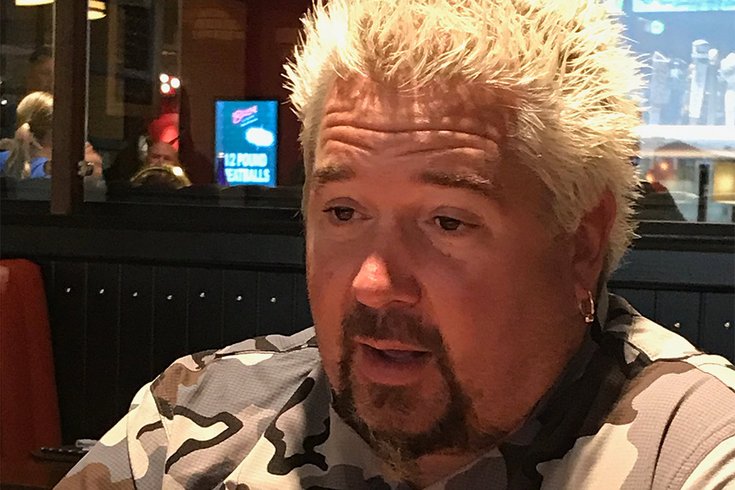 Guy Fieri holds court with reporters during a recent visit to his namesake Chophouse restaurant at Bally’s Atlantic City. The celebrity TV chef recalled making his first meal – ribeyes and pasta – around the age of 9. "I'm watchin' my dad and he takes a bite of steak, and he sets down his fork and knife ... he leans over at me and .... he goes, 'Might be the best steak I ever had in my life.’"

Guy Fieri, the spike-haired, tatt-bedecked host of “Diners, Drive-Ins & Dives,” one of the Food Network’s signature series, was back in the area last week visiting his eateries at Harrah’s Philadelphia (Guy Fieri’s Philly Kitchen & Bar) and Bally’s Atlantic City (Guy Fieri’s Chophouse) to make sure all was running smoothly and to schmooze customers and the media.

Rather than consent to a series of one-on-one chats with the dozen or so reporters who gathered at the Chophouse on a gray Friday afternoon, the loquacious and good-natured Northern California native insisted on a more informal group chat, during which he opined and pontificated on topics that ranged from his beginnings as a chef to marijuana to what his last meal would be if he knew he had but 24 hours to live.

Below is a sampling of the World According to Guy Fieri:

'NOT MY FAVORITE THING'

On how his life in the kitchen was launched:

“I started cooking when I was about 9. My mom was making eggplant parmigiana, and you know that smell when breadcrumbs fry in oil? I could smell the parmigiana.

“[I said], 'Oh! We're having chicken parmigiana' because we didn't eat meat that much. She goes, 'No, we're having eggplant parmigiana.' And I said, 'Can't we just have chicken parmigiana like normal families?' So, my mom said, 'You know, Guy, if you don't like the way we cook, then you cook.' So, I said 'Fine.'

“And that day, I went to the grocery store – Valley Grocery Store in our little town of Ferndale – and I went to…the butcher and said, 'John, I want to make dinner tonight. I want to make steak. He said, 'Alright, Guy, who's it for? Your mom, dad, and sister?’ And he gave me two steaks – I believe they were ribeyes.

“So, we sit down for dinner…and all it is, is steak and pasta. I'm watchin' my dad and he takes a bite of steak, and he sets down his fork and knife – he has this way of putting his hands on the table – and he leans over at me and I [think] 'Oh God, he's gonna kill me,' and he goes, 'Might be the best steak I ever had in my life.’

On his well-known disdain for eggs:

“I was about 12, and we were at my buddy’s ranch and we were making fried-egg sandwiches with Tabasco sauce, and we cracked one, and that's when I realized what the egg really was. I understood animals and butchering animals; I'd been through that as a kid.

“Maybe it was...the chalky yoke or something like that, and I just thought, there are so many things I can eat and enjoy, why am I gonna eat this thing that I'm not a fan of?

“I cook with eggs all the time; I love carbonara, and carbonara is all egg. So, I contradict myself on that situation, but it's texturally not my favorite thing.”

On cannabis, culinary and otherwise:

“Where I come from [Humboldt County, the capital of American cannabis cultivation], it was a major part of the agricultural scene. It drove a lot of the community.

“Cooking with it, I don't really know, I haven't seen a lot with it. I haven't done it.

“But I think we've kind of lived in the Dark Ages ... I think we're just starting to open up the window to what the reality is, and I think we're going to find there are a lot more positive benefits. My dad just battled through cancer, and I saw the positive effect of what CBD does.

“My philosophy is this: Whatever is good for people, I'm a believer in. I believe everything can also be bad for people, so I think it has to be in moderation, and has to be controlled and has to be measured. What I'm not interested in is somebody telling somebody else how to live their life.”

'THAT IS MY KRYPTONITE'

“I really try to pay attention to what I eat. I exercise a lot. I'm not an Iron Man by any means, but I hike. I'm a real outdoors person. I'd hike in the rain versus going on a treadmill. Hiking is my favorite thing.”

On his favorite cities:

“I would say besides my house, which is its own country, its own island, New Orleans, Portland and Seattle. But Chicago to me, there's something about it. It's a small big town, it's easy to get around and the [ethnic] diversity inside the city – you name the type of food and I can take you to a joint that does it.”

On the camouflage kitchen-wear he rocked during the interview:

“A buddy of mine owns a really successful 'camo' company called KIUI, and my manager [at the Chophouse] called them and said, 'Hey, listen: I wanna make Guy a chef coat and I think this would be a really great chef coat for him.’

“It's my pride and joy. I love it. The great thing about this material is that it is real outdoors material and it is impervious to just about anything. It doesn't snag, it doesn't tear.”

On his menu for a hypothetical last meal:

“Something I cooked. Something raw. Something spicy, something multiple-ethnic: Asian, Italian, Mexican, Middle Eastern. Nothing sweet, and some really, really super, kick-ass crusty sourdough bread. That is my Kryptonite.”

On his favorite kind of beer: