After giving Philly so much, Hamels appreciative on the way out

This being Philadelphia, let’s get the only major blemish of Cole Hamels’ excellent run in Phillies pinstripes out of the way: 2009, when some poor pitches and plain ol’ bad luck saw his ERA jump to 4.32. His season ended with a rough outing in Game 3 of the World Series against the New York Yankees.

After that start, with his team still only three wins from a title, Hamels memorably said that he couldn’t wait for the season to end. Fast-forward five years and Hamels has rebounded from the speed bump in a major way. In almost 1200 innings since then, the 31-year-old lefty slapped together a 3.07 ERA and threw just under one strikeout per inning during that time.

Early on in Hamels’ career, Ruben Amaro believed the Phillies’ young ace’s major weakness was mental. Specifically, Hamels had trouble dealing with less than perfection. In that way, the San Diego native was the quintessential Philadelphia.

“Being able to accept defeat in a more natural way,” Hamels answered when asked what he learned from the trying 2009 season. “It’s humbling. You’re playing against big leaguers and you can’t just expect to go out there and shut them out every day, time and time again.”

Hamels evolved, both mentally and by adding a curveball to what was only a two-pitch arsenal. And now with the organization in full rebuilding mode, he was finally traded to the Texas Rangers for Matt Harrison's contract and a haul of five prospects. Hamels is scheduled to take the mound in Arlington on Saturday night as the Rangers face the San Francisco Giants. It will undoubtedly be a strange sight, as this doesn't look right at all:

Before he left, Hamels had an honest conversation with Philadelphia one last time on Friday afternoon. The former Phillie (man, that feels weird to type) was very reflective of all he accomplished in almost a decade in the Delaware Valley. More than that, Hamels felt appreciation for a city that he himself has provided with so much joy.

“I can't thank you [enough],” Hamels told Phillies fans. “It's been one of the most joyous experiences that not only myself but my family has been able to be a part of. Raising my family here, it's been special.”

Family was a theme that kept coming up. Hamels’ two young sons sat in the first row and watched him (or just played with the seats) explain why the Rangers were one of the nine teams left off his no-trade list. That list, an oft-discussed topic during the ongoing speculation, was something that Hamels and his wife Heidi spent a month trying to figure out in the offseason.

Good thing, too. Like Amaro, Hamels sort of skirted around the question of whether or not he put the kibosh on a trade to Houston. Neither denied the initial report, which was telling. Hamels made it clear that playing for the Rangers appealed to him for reasons outside of baseball. He has a brother-in-law and sister-in-law in the Dallas area as well as a former minor-league roommate that he’s still close friends with. It also doesn’t hurt that the airport in town makes the trip back home to California a fairly painless one.

From an on-field perspective, Hamels is using the experience of playing for the 2007 and 2008 Phillies to think positively. The Rangers are currently three games under .500 and four games out of the American League’s second wild card spot, but those pennant chases in Philadelphia taught him that it’s possible for a team to heat up down the stretch. Even if the Rangers come up short this season, 2016 looks more promising when they’ll have both Hamels and Yu Darvish back from Tommy John surgery at the top of the rotation.

“Knowing that there's always a chance, especially in that league, you can put on a good roll,” Hamels said. “Knowing that I can be a part of that. I don't think they're too far away, especially this year. I'm excited for next year. I know a couple of guys are going to be coming off the disabled list, so to be part of something that's going to be special there and live up to what I know and what I expect, I'm excited to see where it will go."

Now that we know the long first chapter of Hamels’ professional baseball career is over, could it have possibly finished on a higher note? He joked about getting away with a hanging curveball to Kris Bryant for the final out, but throwing a no-hitter is always very special. To toss a no-no in his last start with the only organization he’s known, even more so.

Hamels’ younger teammates, particularly Odubel Herrera and his crazy late catches in center, played a major role in securing the no-hitter. Still, you could tell the best part of last Saturday for Hamels was the ability to share it with the 2008 crew. 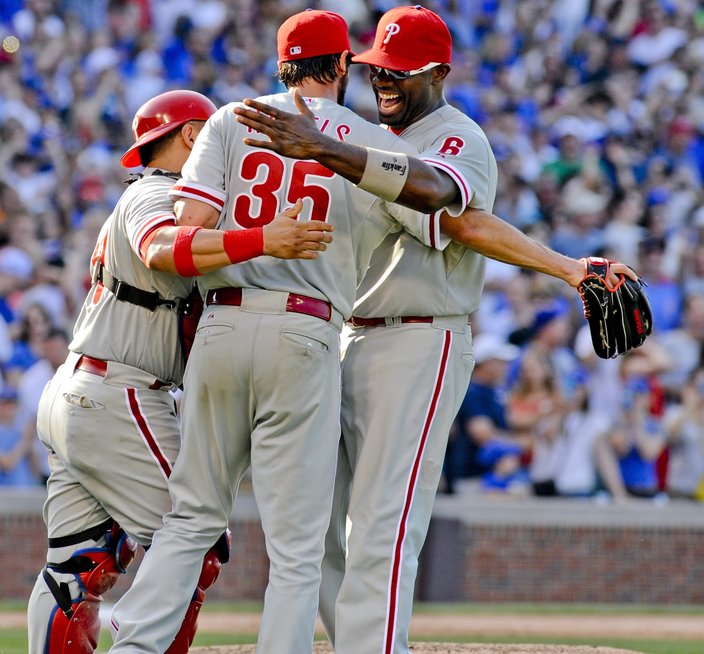 “I would not have been able to do that without Carlos Ruiz and what he's been able to do for my pitching career, how we've been able to work so well,” Hamels said. “Having Howie out there, he's been out there forever behind me. Even having Chase in the dugout, those are guys that I've played with from the very beginning.”

One magical afternoon at Wrigley Field aside, it was time to move on. Hamels mentioned that when he re-signed in 2012, the Phillies still had Roy Halladay and Cliff Lee on board (“a no-brainer”), but things turned south quickly as injuries and age started to take a toll. The organization wasn’t going to trade their best asset at the deadline because they felt an obligation to, but Hamels was wasting bullets pitching on this team.

“It’s the best memories I've ever had and continue to have after that,” Hamels said of 2007-2011. “Obviously good things do end at times and you have to move on. But if you're able to play long enough, there's always a second chance.”

This being Cole Hamels, let’s finish with the best of those memories. You know which one I'm talking about, the whole month of October 2008. First, he set the tone for the whole playoff run by shutting out the Brew Crew in eight innings at CBP. Next, he held down the Dodgers on both coasts and sent to the Phillies to their first Fall Classic in 15 years.

Then, Hamels foiled the upstart Tampa Bay Rays on the game's biggest stage. There he was, a 24-year-old World Series MVP.  Fast-forward six years to Friday, and Hamels was reflecting on the city’s only parade since 1983.

“I know a lot of us are not from Philly, and we come here and our dreams are to win a championship and win a ring and not really understand the purpose behind it, but we really grasped that when we got to take that parade down Broad Street and see what it had done for the fans here.”

Pat Burrell was inducted to the Phillies' Wall of Fame on Friday night a few hours after his former teammate was headed to Texas. The only question for Cole Hamels is when, not if, he'll receive the same honor.