Handing out 10 awards from the Eagles-Chiefs game 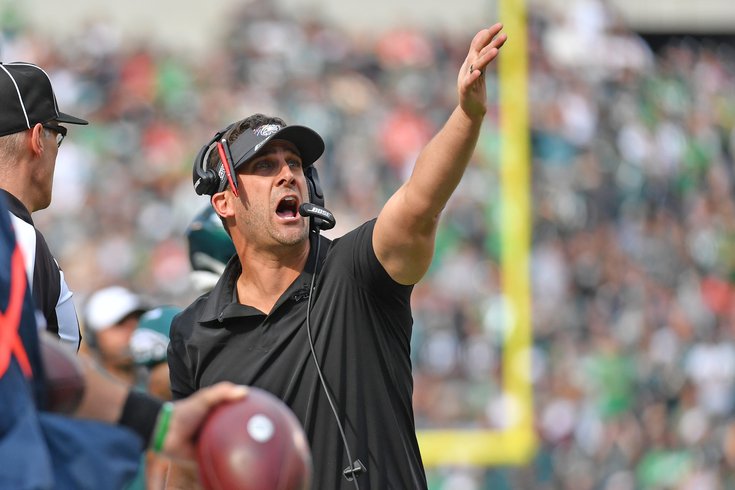 Nick Sirianni reacts when his paper is defeated by the scoreboard operator's scissors.

The Philadelphia Eagles played a really good team in the Kansas City Chiefs Week 4, and, well, the better team won, 42-30. As always, win, lose, or tie, we hand out 10 awards.

In the stat sheet, the Eagles committed nine penalties. In reality, there were more, that were either declined or superseded by Chiefs personal foul infractions. A total of 10 penalties set the Eagles back, listed here, with the negated TDs bolded:

Assuming made extra points, penalties cost the Eagles 15 points, in that they could have had 21 points but instead only got 6.

On the season, the Eagles now have 44 penalties, which puts them on pace for 187 on the season. As we have noted previously, the all-time NFL record for most penalties in a season is 163, by the 2011 Raiders.

Not including one final kneeldown to end the game, the Chiefs only had seven possessions, and they scored six touchdowns. They were 9/10 on third downs, they gained 200 yards on the ground, Patrick Mahomes threw 5 TD passes, and Tyreek Hill went off for 11 catches, 186 yards, and 3 TDs.

If the Eagles offense hadn't had a bunch of long, sustained drives of their own, who knows how many points this team would have scored. They looked like a first-team offense running a 7-on-7 drill against third-stringers.

Sirianni had a much better game plan offensively against the Chiefs than he had against the 49ers or Cowboys, so give him a golf clap for that, I suppose. However, he had a really bad moment early in the game.

On the Eagles' first drive, the offense was facing a 4th and 3 from the Chiefs' 16 yard line. They kept the offense on the field, and rightfully so, seemingly aware that field goals weren't going to beat the Kansas City Chiefs.

With the play clock running down, Hurts called timeout to avoid a delay of game penalty. On the other side of the timeout, Sirianni elected to instead kick a field goal. What?!?

Asked about that sequence post-game, Sirianni and Hurts gave sketchy explanations for what exactly happened.

"We went all the way down there, we had a really good drive. We ran out of time on the play clock on the one. I didn't get the call in quick enough. So, once we got to that, I thought it was important that we got points on the board at that particular time. I thought it would be too much of a momentum swing if they stopped us on fourth-and-three, so I decided to kick a field goal."

"I think there was a miscommunication and there’s little stuff like that. Little stuff like crowd getting loud. It’s new for me, so I have to quiet them down. That makes a big difference. Everybody can’t hear me calling the timeout. Communicating that to the coaches, I called a timeout, it was not a delay of game. It was an assumed delay of game. Probably would’ve went for it, probably wouldn’t have, it happened the way it happened. We have to capitalize in the redzone.”

To begin, Sirianni did not get a play in on time on 4th and 3. So there's already one gaffe there. And then after Hurts called timeout, it maybe sounded like Sirianni instead thought there was a delay of game penalty, so he sent out the field goal unit thinking it was now 4th and 8? And then once he realized that it was a timeout, and thus still 4th and 3, he thought, "Screw it, we're just kicking the field goal?"

Whatever. Ultimately, it doesn't really matter. It's poor game management no matter how you slice it. Sirianni is a rookie head coach, and he'll have some time to get through his struggles, but that kind of stuff won't be acceptable for long.

The Eagles were in scramble mode at the end of the first half, trying to get into field goal range. With just under 30 seconds to play and only one timeout in their pocket, Kenny Gainwell was tackled in bounds for a gain of 1.

If they had the timeout they previously burned on the opening possession, they surely would have used it. Instead, they scrambled to get to the line of scrimmage to run a play, and the following Keystone Cops scene ensued:

Chris Jones OFF THE HEEZY😂

Maybe that sequence is different if the Eagles had that extra timeout? We won't know.

On the day, Hurts was 32 of 48 for 387 yards, 2 TDs, and 0 INTs. He also rushed 8 times for 47 yards. He showed good poise against a defensive coordinator in Steve Spagnuolo who blitzed the crap out of him, and an overthrow to Ertz on the opening drive aside, he probably had his most accurate passing day as a professional quarterback. Hurts led an Eagles offense that put 30 points on the board despite having three touchdowns called back due to penalty.

Nick Sirianni called it one of the best quarterback performances he's ever seen.

“That’s one of the better quarterback performances I’ve seen, and I’ve been around a lot of good quarterbacks. With Philip Rivers and Andrew Luck. He battled. He made good decisions with the football. […] That’s the best I’ve seen him in a game.”

I wouldn't go that far. Hell, he wasn't even the best quarterback in this game. And if we're going to nitpick, he seemingly threw the ball away on a 4th down, even if he said after the game that his intention was not to throw it out of bounds.

At a minimum, Hurts' performance was a major improvement from Week 3.

An hour and a half before every NFL game, every team discloses their inactive list. There are rarely any surprises. On Sunday, Lane Johnson's name appeared out of nowhere on that list, with no other explanation than that he was out due to a "personal matter."

With Johnson out, the Eagles were missing four starters along their offensive line, and they rolled out the following lineup:

Yes, the Chiefs' defensive front won't remind anyone of the 1985 Bears, but the O-line actually played about as well as one could reasonably hope for.

In his post-game press conference, Sirianni declined to reveal any further information on Johnson's absence, and he did not seem to have a sympathetic tone. Stay tuned.

Cox did not register a stat in this game. At times while watching the Eagles' defensive line, it appeared that Cox had more than his share of one-on-one opportunities, and he did nothing with them. We'll have to wait for the coaches film to come out to get a better idea of what exactly Cox did in this game, but the excuse that he is facing double teams all day is becoming in invalid one.

9) The 'At Least This Game Was Kinda Fun' Award 🎈: The Eagles and Chiefs

The Eagles and Chiefs combined for 72 points, 61 first downs, 932 yards, and 0 punts. At least that beats what happened Week 3.

In addition to the Eagles' loss, the Cowboys, the Football Team, and even the Giants all won. The updated NFC East standings

The Eagles are now on the same level as the Giants.