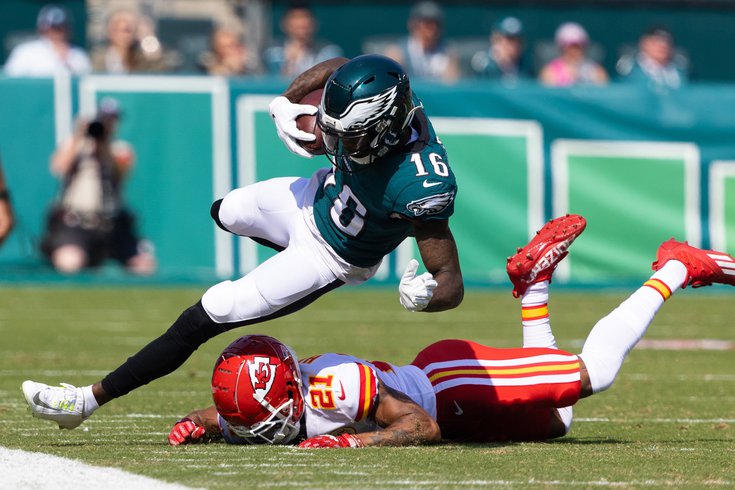 The Eagles' offense looked decent in the first half on Sunday but the Chiefs ran wild on offense to get out to a 21-13 lead on the road, aided by some stupid mistakes on Philadelphia's end.

• It certainly seems like this coaching staff heard and adapted based on the criticism of what did not work in Dallas on Monday night. The Eagles made it a point to run the ball right away, they took more intermediate shots, and pre-snap motion was used frequently in the first half of Sunday's game, flipping the script after a poor showing against the Cowboys.

The most noticeable difference, mind you, was the pace with which Philadelphia played on offense. Philly wasn't strictly running a no-huddle offense, but they got into their tempo offense early and attacked the Chiefs with a lot of quick-hitting plays, using their speed to stretch Kansas City out horizontally, if not vertically. Everyone from DeVonta Smith to Jalen Reagor to Kenneth Gainwell got the chance to take the ball in space and show everybody what they could do with it. While we have to note that this Chiefs defense has been brutal all season, it was still a return to form for a group that has taken plenty of heat over the last two weeks.

The QB wasn't half bad either, despite a big miss early in the first. On Philadelphia's second drive of the game, Hurts used his mobility to buy time on a critical fourth-and-short play, floating a pass over outstretched arms to Gainwell, who extended the drive and came up with another big play shortly afterward to push the Eagles deep into the red zone. From there, it was as simple as Hurts finding Dallas Goedert in the endzone, with the QB delivering a nice pass and Goedert doing well to complete the catch process:

Dallas wasn't letting go of this one 🔒🙏 pic.twitter.com/CY1R3MCti8

This looks more like the offense we saw in week one against the Atlanta Falcons — creative, quick, and understanding of their strengths and weaknesses. Hurts spread the ball around, and it was to the benefit of the entire group that no one on Kansas City's defense could figure out where the Eagles were going on a given play.

• Gainwell turned a lot of heads with his play in the preseason, but it was assumed that he would be in a niche role this year with Miles Sanders getting most of the reps in the backfield. Guess again — Gainwell had a big first half against Kansas City, with Sirianni looking to get him involved early and often by taking advantage of his receiving background.

It's fairly common for young quarterbacks rely on tight ends as their crutch in big situations, but it was the much smaller and quicker Gainwell who seemed to be there when Hurts needed someone the most in the first half. And on many of those big plays, Gainwell lined up as a true wideout rather than as a weapon out of the backfield, beating the Chiefs' coverage with ease time and time again. I'm not sure whether to be heartened by Gainwell's emergence or slightly confused at the lack of Sanders involvement — we don't need to rehash the arguments after last week's game — but if they're getting value at the position, I suppose it's hard to complain.

• Dallas Goedert is a big, talented dude, and his ability to impose his will physically is one way where he seems to have distinguished himself from Zach Ertz. His would-be touchdown was wiped out late in the second quarter on Sunday, but he powered through both a facemask and tackle to force his way into the end zone, an impressive show of strength that should have put the Eagles back into the lead.

Unfortunately, that's not how it ended up playing out thanks to a penalty on Andre Dillard, but it was nice to see anyway.

• I plead to the Eagles — Get DeVonta Smith the ball.

• Philadelphia's offense looked crisp for most of their first drive, the exception being Jalen Hurts' miss on second-and-eight that cost the Eagles a touchdown. Ertz broke free down the middle of the field, Hurts had him on a relatively easy throw for six, and he just flat-out missed, sailing it past Ertz and ultimately squandering the best opportunity they had on the drive. That qualifies as a "must-have" play in any game but certainly in a game against Kansas City, who can put up points in a hurry.

(Hurts was also extremely fortunate to avoid throwing an interception midway through the second quarter. The second-year QB tossed up a duck under duress that fell into no man's land between two potential targets, with the Cheifs missing the opportunity to turn him over by mere inches after it hit the turf in the process of completing the catch. Philly lived to fight another day, but it was a bad decision regardless, as it was only second down to boot.)

• I know the Chiefs are a unique team to try to stop with an absolute burner leading the way in Tyreek Hill, but getting beat deep playing Cover 3 seems pretty inexcusable regardless of how fast the guy is going against you. There were also some matchups that Philadelphia ended up with in the first half that should basically never happen — having any linebacker on Hill is bad enough, but ending up with Eric Wilson covering Hill is absolutely insane, and it ended as you might expect, with Hill getting open and scoring a touchdown thanks to the friendly setup.

This probably isn't breaking news to anybody, but Andy Reid and his offense are better than Jonathan Gannon and his defense so far. The younger coordinator is going to have to come up with some answers in the second half, because the Chiefs were able to dig themselves out of any self-created hole they put themselves in. Philadelphia was just hanging on for dear life on defense.

• To hone in on a couple of guys on defense, someone is going to have to explain to me what this front office sees in Derek Barnett, because the miscues he makes and the big plays he whiffs on seem to far outweigh his production. He picked up yet another brutal penalty with just over a minute to go in the first half, and even up to that point Barnett was a non-factor at best, just simply "there" rather than impacting the game in a positive manner. He's a ticking time bomb on his best day.

The latter tag belongs to the aforementioned Wilson, whose issues in coverage were compounded by some strange decisions elsewhere. Wilson was a blitzer on one play in the second quarter and appeared to have a lane to Patrick Mahomes, only to slow up before reaching the QB and allowing Mahomes time to assess the field and turn it into a positive play. No idea what he saw, but allowing the league's most dynamic QB talent to sit back there longer seems like a bad tactical choice.

• I sure do miss the days when the Eagles were tough against the run. The Chiefs play mostly through the air for good reason, but after getting the ball back with a few minutes to play in the half, Kansas City gashed the Eagles with some big plays on the ground to move into Philadelphia territory before the two-minute warning had even hit, and continued running wild on them immediately after the TV timeout. Reid is obviously happy to beat you through the air for 60 straight minutes, but when you can't do anything to remove the threat of the ground game, you're basically drawing dead against this group.

• Red-zone execution and play-calling continue to be a bugaboo for this team, and they squandered another golden opportunity late in the second quarter against Kansas City. The second-down play was an absolute failure before the ball was even snapped, a designed throw to the flat to Miles Sanders, but some blame has to be put on both the play-caller and the quarterback. Yes, Sirianni botched the call and tried to get a little too cute, but everybody watching the game could see Sanders was going nowhere the ball before he ever got it. In that scenario, Hurts has to be able to read the play and either improvise to go elsewhere or dump the ball and keep the team in a short-yardage situation for third down.

And that's before touching on the first-down touchdown the Eagles missed on when Hurts went to Greg Ward around the goal line. The throw hit Ward in the hands and probably should have been a touchdown regardless, but Hurts made him stretch just enough to make it a labored attempt rather than an easy pitch-and-catch, and that was enough to make a difference.

There are limitations to a Hurts-led offense, and frankly, that's okay. Not every good QB has limitless tools and the ability to make every throw. But if you have to curtail the offense and he's missing on must-have stuff, that's a tough combo to work around.

• Penalties have been a story for this Eagles team every single week so far this season, and the trend continued in the first half against the Chiefs, with several costly penalties erasing good work done by the defense. One was particularly bad — Josh Sweat came up with a sack of Patrick Mahomes that earned roars from the home crowd and would have forced Kansas City into a big third-and-long, only for an illegal contact penalty on Rodney McLeod to wipe it all out.

(For those keeping track at home, Andre Dillard was flagged more than once in the first half, though one was wiped out by a facemask on the Chiefs. Taking a touchdown off of the board with a flag is, in a word, tough.)

• The man standing across from Nick Sirianni was skewered for years and years for poor clock management, so it felt weirdly fitting that Philly's head coach butchered a clock decision early in this one. Philadelphia lined up to go for it on fourth and three early in the first quarter, a move that felt wise given the caliber of offense they're up against. But when things went haywire at the line of scrimmage, the Eagles made the mistake of taking a timeout on what was going to be a chip-shot field goal regardless of whether they added another five yards or not. If you don't want to go for it there, just eat the penalty and move on. Terrible decisionmaking.

(It won't get as much play, but refusing to call a timeout before the third down play that Jalen Hurts fumbled on was just as bad.)

Speaking of Andy Reid, did everyone but Philly's coaching staff see the shovel pass coming on KC's opening touchdown? That's a Reid staple in the red zone, as the Chiefs showed you when they scored on the exact same play to close out their first half. I'm not sure who put together the scouting report for this one, but good grief.