So did their defense... 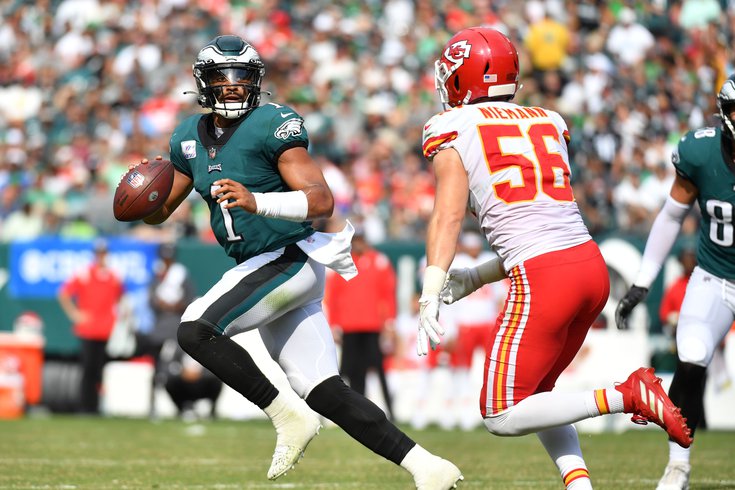 Remember two weeks ago, when the Eagles wasted a 91-yard Quez Watkins reception by out-smarting themselves in the red zone, indirectly leading to a loss to the 49ers?

What you may not know is that was the Eagles' only red zone trip this season that did not result in seven points. That, of course, was before they played the Chiefs.

Back at home Sunday, the Eagles found themselves moving the ball extremely well (they gained 461 yards from scrimmage) but for whatever reason — sometimes bad luck and other times pure idiocy — the Birds were 3-for-6 on scoring opportunities inside the 20 (one of which was meaningless and came in garbage time with four seconds left). Kansas City, on the other hand, was a perfect 5-for-5, and it was Philadelphia who fell short of upsetting the defending AFC champs, losing 42-30.

We will, just for a second, set aside that the defense allowed 42 points and five Patrick Mahomes touchdowns — a subject that will no doubt command many bylines and much analysis over the next week. A slightly better defense, fewer penalties and especially some better execution in the red zone makes this a totally different ballgame.

Lets take a look at each of these red zone scenarios and why so many didn't find pay dirt:

• With just inside 12 minutes to play on the their opening drive, the Eagles ran their offense out on the field for a fourth-and-three and then, amid confusion with the play clock winding down, burned a timeout and kicked a field goal from the 12-yard line. Why did Sirianni burn that timeout if he was going to kick the FG anyway? Five extra yards wouldn't have done much to hurt Jake Elliott's chances of making the chip shot had they taken the penalty — and a timeout only makes sense for the team collecting itself to go for it. Anyway, they took an early lead 3-0 but this missed opportunity turned out to be a sign of things to come.

"We went all the way down there," Sirianni said, offering an explanation after the loss. "We had a really good drive, we ran out of time on the play clock, I didn't get the call in quick enough, and so once we got to that, I thought it was important to get points on the board at that particular time. I thought it would be too much of a momentum switch if they stopped us."

• Later in the first, in practically an identical scenario, Sirianni went for it — and a 12-yard completion to Kenny Gainwell converted the fourth-and-short and set up a touchdown pass to Dallas Goedert following a holding penalty. The Eagles led 10-7. This would have been even more logical had they went for it earlier. Hm.

• For a third time, the Eagles had a fourth-and-short inside the 20, and for some reason — despite trailing 14-10 and knowing he'd need touchdowns to keep up with Kansas City, the Birds' skipper elected for another FG. An ensuing Chiefs touchdown had the Eagles down by eight at the half. The inconsistent decisions had fans scratching their heads at the break.

• The most bizarre and frustrating fourth down inside the 20 came in the third quarter. First, the Eagles were flagged for a delay of game — with Sirianni inconsistently once again deciding against burning a timeout despite having done so earlier in the game. After the flag, an attempted FG was called back on a defensive penalty, and on 4th-and-3, Zach Ertz caught a Jalen Hurts touchdown pass. Only he didn't, as it was called back on an offensive pass interference call against J.J. Arcega-Whiteside, forcing the Eagles to settle for yet another field goal. A few minutes later, the Eagles trailed 28-16.

• They played a different tune in a fifth red zone attempt to open the fourth quarter, overcoming a Hurts sack to ride Gainwell (who caught a pass and then scampered into the end zone on a later rush) to cut the Chiefs edge to 28-23.

• Technically, the Eagles converted on their final red zone try — a 15-yard garbage time touchdown toss from Hurts to Ward that was completely inconsequential, was scored against mostly Chiefs backups and had zero impact on the result of game — but in the interest of being accurate well include mention of it.

It bares mentioning that the offense, which generated six red zone chances after seven combined through the first three games has nothing to be ashamed of. But going 3-for-6 on four-point plays (one of which was in garbage time) is really rough.

A non-red zone scoring opportunity — a bomb of a would-be touchdown toss to DeVonta Smith was called back when he stepped out of bounds, leading to a desperation fourth down turnover on downs to put the nail in Philly's coffin.

In theory, had the Eagles been able to execute in the red zone, they'd have kept pace with the Chiefs. Even if they had scored two of the three times, it would have been a one possession game down the stretch.

The offense played well enough to win. Neither team punted, and the Eagles defense, while pretty lackluster at slowing down Patrick Mahomes, did force a turnover that led to — surprise — a field goal.

This game, though it sets the Birds back to 1-3, is certainly something the offense can proudly build on. Should they be taking moral victories away from a 42-30 beating? Probably not. But the defense — which allowed this monstrous Mahomes performance is the bigger issue. And while the execution inside the 20 will no doubt improve as the team plays more and more together this year, Sirianni's decision-making will need to similarly evolve and become more consistent and purposeful if he hopes to lead the Eagles to any kind of success in 2021.

"I am not going to make an excuse, I need to be better," the coach said."