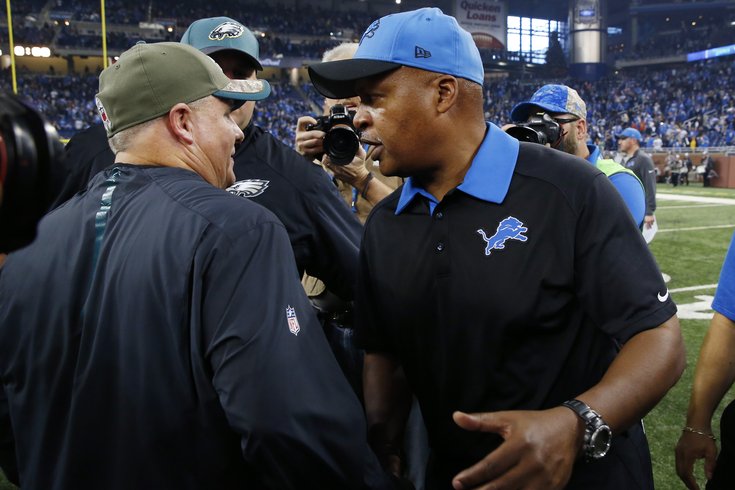 "Chip, you want to be my offensive coordinator next year? Pfft, SIKE!"

Earlier this week, we listed the 15 most embarrassing Eagles losses (or ties) over the last 15 years. Welp... We may have a new low after the second consecutive dumpster fire of an Eagles performance in as many weeks, this time in front of a national audience on a major holiday. As always, win or lose, we hand out 10 awards.

Honestly, I can't see how Chip Kelly survives this. The Eagles are almost certainly not going to make the playoffs, and if they play anywhere even remotely as badly as they have the last three weeks, they are likely going to finish 4-12, with severe locker room issues. It will be extremely difficult for Jeffrey Lurie to justify allowing Kelly to stick around after that.

Well, yeah, if Chip goes, so will Bill Davis.

3) The Sieve Award: The Eagles' secondary

For the second consecutive week, the Eagles allowed five TD passes. They have now allowed 25 TD passes on the season, which is somehow only second worst in the NFL behind the New Orleans Saints.

Actually, I shouldn't just limit this award to the secondary. The linebackers didn't cover anyone either. Oh, and there's been no pass rush whatsoever. So there's that too.

Next up: Tom Brady!

4) The Mercy Award: The NFL

The Eagles still have five more games to play. If the NFL were kind, they would just let the Eagles walk out on this season with five 2-0 losses. There's a great chance they won't win another game this season. I can only imagine what next week in New England is going to look like.

5) The Delusion Award: Me

A few weeks ago, I was of the opinion that the Eagles weren't one of the worst teams in the NFL.

Eagles next 3 opponents have combined record of 7-17. Going 2-1 isn't good enough. Have to beat all 3 before taking their beating in NE.

6) The No Chance Award: Eric Rowe

After Eagles CB Nolan Carroll was lost with a broken ankle, rookie Eric Rowe was tasked with one-on-one responsibility against the most physically impressive wide receiver on the planet in Calvin Johnson. And in reality, Rowe's coverage wasn't even all that terrible, but there's no excuse whatsoever for not giving him some help. On the day, Johnson had 8 catches for 93 yards and 3 TDs.

Against the Lions, Murray had one run of 19 yards. His other 13 wholly inspiring runs netted a total of 11 yards. On the season, Murray has 141 carries for 515 yards (3.7 YPC), and 4 TDs. This was easily one of the worst free agent signings in the NFL this offseason.

The Eagles lead the league in congratulating opponents when they make good plays. Little pats on the head, or the butt, smiling, laughing, etc. The fan base doesn't want to see that crap when the team is getting pummeled to the tune of 90-31 over the last two weeks.

Seriously... How is Miles Austin still in the league, much less being used in the Eagles' offense... a lot... and in key situations! It boggles the mind.

Oh no? That's what we thought last week.