The Eagles are officially a disaster -- so where do they go from here? 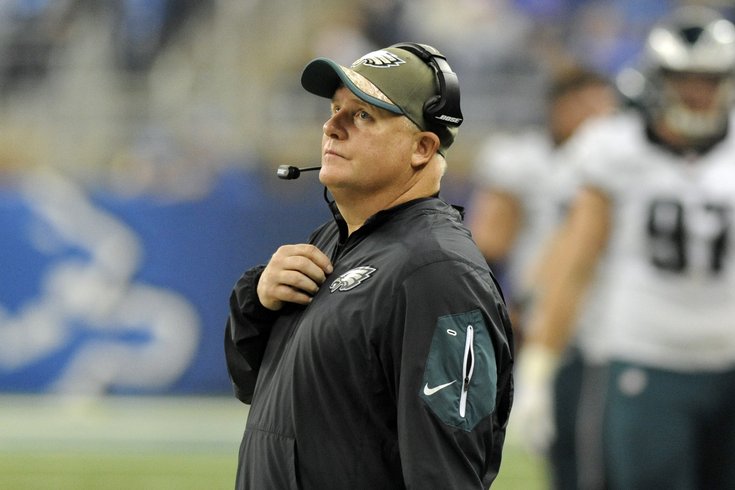 The Philadelphia Eagles clearly hit rock bottom on Sunday with their 45-17 loss to the Tampa Bay Bucs, right? Wrong.

It got worse on Thanksgiving against the Detroit Lions, as the Eagles lost their third straight game, this time a 45-14 defeat in which Chip Kelly's team never really competed. In the loss, the Birds became the second team since the 1970 NFL merger to allow five passing touchdowns in consecutive games.

Furthermore, those three losses all came against teams that were in last place in their respective divisions prior to facing the Eagles. And suddenly, a team that was guaranteeing a trip to the Super Bowl before the season began has become a laughingstock.

Troy Aikman after Agholor took of helmet: "I'm not sure why you'd want to show your face on TV anyway if you're wearing an Eagles uniform."

How they Eagles have gotten to this point is somewhat of a mystery -- there are so many reasons that it's hard to tell which is most responsible -- but if you're looking for a place to begin, you need to head back to the offseason, specifically the week after the Eagles 2014 season came to an end. That's when Chip Kelly was given full control of the personnel. In the 11 months since, Kelly's made more than a few questionable moves.

But for all intents and purposes, this Eagles season is over; living in the past is not going to change that. Instead, let's take a look ahead and see what the organization can do to get back on the right track.

Strip Kelly of his personnel control

Sorry, Chip. You can't blame Howie Roseman for this one.

Stripping Kelly of his general manager powers would be the first, most logical move. Since his arrival following Andy Reid's ouster, Kelly's Eagles have gotten worse and worse as the former Oregon Ducks coach has injected more and more of "his" players onto the roster. And since Kelly supplanted Roseman as GM, it's only gotten worse.

For context, here are some of the moves that have backfired for Kelly since he took full control:

•    Trading LeSean McCoy for Kiko Alonso -- McCoy has been solid for the Bills, while Alonso hasn't done anything since picking off Matt Ryan in the opener.

•    Signing DeMarco Murray to a big-money deal -- After dealing McCoy, the Eagles needed to sign somebody to carry the ball for them, and they landed on former Cowboy DeMarco Murray. He was touted as a north-south back that ran straight ahead rather than side-to-side like McCoy. So why has it felt like Murray has spent more time running parallel to the line of scrimmage than plowing forward?

•    Signing Byron Maxwell to a $60 million deal -- The Eagles certainly needed to upgrade their secondary, and Maxwell hasn't been as bad as Bradley Fletcher, but he certainly isn't worth all that cash. Just look at what Nolan Carroll, whose season is likely over after breaking his ankle Thursday, and Walter Thurmond have been able to do while making much less money.

•    Trading Nick Foles (and a second-round pick!) for Sam Bradford -- It's safe to say that Bradford hasn't been the guy Kelly has hoped he would be when he traded for him. And yes, the team surrounding Bradford, especially the offensive line, is much more suspect than what Foles had in his time under Kelly. Still, Kelly is 14-4 with Foles as his QB and 10-15 with everyone else.

•    Letting Todd Herremans walk and cutting Evan Mathis -- Both these guys were getting up there in age, but to let them go without having anyone ready to take their place is just foolish, especially when you have an aging left tackle in Jason Peters.

•    Drafting Nelson Agholor in the first round -- Agholor hasn't been good this year, and given the fact that he's a rookie, I have a little more sympathy for him than a guy like Josh Huff, who has also underperformed in his second season. However, don't you think the Eagles could have better used that pick to solidify their offensive line? And while they hit on LB Jordan Hicks in the third round, second-round pick Eric Rowe hasn't played much this season, and when he was forced into action against the Lions on Thursday, he looked like a fish out of water.

•    Allowing Jeremy Maclin to walk -- This one isn't all on Chip, as Andy Reid and the Chiefs made a big play for the veteran wideout, offering him $13 million per season. Still, it would've been nice for Bradford to have Maclin and Matthews out there instead of Miles Austin.

And that's just off the top of my head.

The question with the Eagles going this route -- stripping Kelly of the GM powers they so willingly handed over to him in the offseason -- is whether or not Kelly will accept it. Next season is the last for which Kelly is under contract, and he could try to get out of town if he refuses to surrender personnel control.

Someone is going to have to be held accountable for this season, and as we've seen many times in the past, the blame doesn't often climb to the top rung of the organizational ladder.

After their loss to the Lions, who scored 45 points despite being ranked second to last in scoring offense coming in, Kelly said defensive coordinator Billy Davis would remain in his post going forward. But that could certainly change as the season goes forward. As for offensive coordinator Pat Shurmur, he doesn't nearly deserve as much criticism as Davis, since Kelly plays a much larger role in how the offense is run. Furthermore, they can only do so much with the talent their GM has provided.

But if the clamoring from fans reaches a tipping point, and the Eagles are forced to offer up a sacrificial lamb for this atrocity of a season, it very well could begin with Davis and Shurmur.

Will Jeff Lurie pull the trigger and fire his coach before he's even fulfilled his contract?

If things don't get better over the final month-plus of the season, that's certainly an option -- and may be a necessity. But if the Eagles do decide to part ways with their coach, that likely won't happen until this season has run its course. Furthermore, getting rid of Kelly could hurt Lurie's pockets, depending on how much it costs to buy Kelly out of the final two years of his deal.

Then again, the Eagles owner could get an easy out if Kelly decides to head back to college on his own. It's not like he's without options -- USC, Miami, and potentially LSU to name a few -- although the coach has said at every turn that he's not interested.

Chip: "I'm committed to seeing this through."

However, if Lurie decides to stay with Kelly, that presents a number of challenges.

• What do they do with Kelly's deal going forward? -- If the team struggle the rest of the way -- and Lurie decides to give Kelly one more shot next season -- he'll be left in the difficult spot of deciding whether to extend the coach or allow him to enter the final, lame-duck year of his contract. And that's just the first hurdle.

• What do they do at QB? -- Sam Bradford is playing in the final year of his rookie. If they decide this experiment was a colossal failure and let him walk, does Kelly have any chance to be successful and turn it around next year -- with the final year of his contract looming? Probably not.

• How much power does Kelly keep? -- See above.

And if those questions prove too difficult for Lurie, he could just decide to hit the reset button.

Blow it all up and start over again

Fire everyone. Re-sign no one. The Eagles become the new Sixers.

Before you jump up and down and yell, "Oh, I want that one!" make sure you realize that going this route likely means at least a few more years of watching games like the one that just ruined your Thanksgiving.

Sell the team and move it to LA

Right now, this doesn't sound like the worst idea...

[NOTE: A previous version of this story incorrectly stated that Chip Kelly's contract expired at the end of the 2016 season instead of the 2017 season.]