Handing out 10 awards from the Eagles-Ravens game 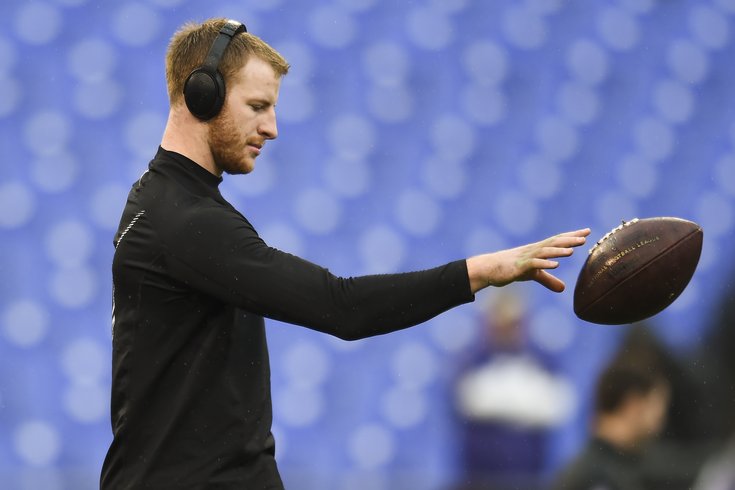 Carson Wentz was less of a Jedi on Sunday than he's been throughout the rest of the season.

BALTIMORE – The Philadelphia Eagles officially have worse odds than Lloyd Christmas with Mary Swanson in Dumb and Dumber, as they are now 5-9 and mathematically eliminated from the playoffs. Their latest loss, which is now their fifth in a row, came at the hands of the Baltimore Ravens Sunday afternoon, although the Birds at least showed some fight down the stretch.

1) The 'Step Back' Award: Carson Wentz

After perhaps his best outing of the season a week ago in a loss to the Redskins, Wentz struggled against the Ravens, going 22 of 42 for 170 yards (a paltry 4.0 YPA), 0 TD, and 1 INT, for a QB rating of 52.7. Yes, it was rainy and windy. Yes, the Ravens have an excellent defense. And yes, Wentz is playing with bad skill position players behind a makeshift offensive line.

However, on the eye test, Wentz looked sloppy. He made a bad throw on his interception, he misfired on several other throws, he dropped a shotgun snap and was largely unable to make plays in improvisational situations like he has throughout the rest of the season.

To Wentz's credit, he did lead a game-(almost)-tying-or-winning-or-whatever drive at the end of regulation, making a play with his feet and diving in for a touchdown past Eric Weddle. Additionally to his credit, I don't think Wentz is the "participation trophy" type.

@jay_24 @JimmyKempski McLeod is on the 9 yard line when the RB is on the 20. Contact begins on the 3 yard line. Wow! pic.twitter.com/z4X91lHJht

In the locker room after the game, McLeod explained that he was unaware of where he was on the field.

He may be fragile and susceptible to fumbles, but when he's healthy and hanging onto the football, Ryan Mathews can be really good. On Sunday, he gashed the best run defense in the NFL for 128 yards on 20 carries. As a team, the Eagles rushed 38 times for 169 yards.

After the Eagles' late touchdown, Pederson faced a decision. Should the Eagles go for two and try to win the game right then and there, or should they attempt the PAT in a windy stadium with a long snapper they just signed off the street earlier this week?

In my view, it was an absolute no-brainer to go for it. The Eagles were 5-8, and their season is over. You go for it in that situation every time, and Pederson absolutely made the right decision to do just that.

And yes, I'm aware that Pederson is Satan for calling a play that did not result in a touchdown.

Agholor caught one pass for nine yards on four targets. He also had a drop and he ran out of bounds on a fourth down run play that he should have easily converted.

Another week, another awful showing by the Eagles' 2015 No. 1 pick.

As noted above, the Eagles ran for 169 yards against the best run defense in the NFL, and a lot of the credit for that should go to the Eagles' offensive line. The Birds also only allowed one sack on 42 pass attempts. The Eagles' offensive line was down two starters as well as several reserves and was playing a rookie guard at RT against a guy with 98 career sacks. They more than held up.

His name isn't often brought up, but offensive line coach Jeff Stoutland has done a hell of job this season.

7) The 'No Cigar' Award: The Eagles, in close games

In all five of their victories this season, the Eagles won by at least nine points. However, in games decided by a touchdown or less, the Birds are 0-6. They are 5-9 with a point differential of +17.

The Eagles could realistically finish this season 5-11 with a positive point differential.

From the Eagles' perspective, at least the Minnesota Vikings lost. Obviously, the Eagles own the Vikings' first-round pick in the Sam Bradford trade and the Vikings' chances of making the playoffs were severely damaged today in their 34-6 defeat at home to the Indianapolis Colts.

Minnesota now has four teams ahead of them in the wild-card hunt, and a 4-6 conference record that won't help them in tiebreaker scenarios.

Eagles, what do you say to Sleevie?

With their loss today, the Eagles clinched last place in the NFC East, and are now mathematically eliminated from playoff contention. Next season, they'll play a last place schedule, and 15 of their 16 opponents are already known.

10) The 'Spoiler' Award: The Giants and Cowboys

The New York Giants won today, bringing their record to 10-4, and keeping them in the hunt for the NFC East divisional crown. On Thursday, the Eagles will have the opportunity to ruin the Giants' chances for the division title and first-round bye in the playoffs. If they cannot beat the Giants, then depending how the Cowboys' games go Week 15 and 16, the Eagles may have the chance to ruin their division title hopes instead.

Does that do anything for anyone? No? OK, well, I tried.