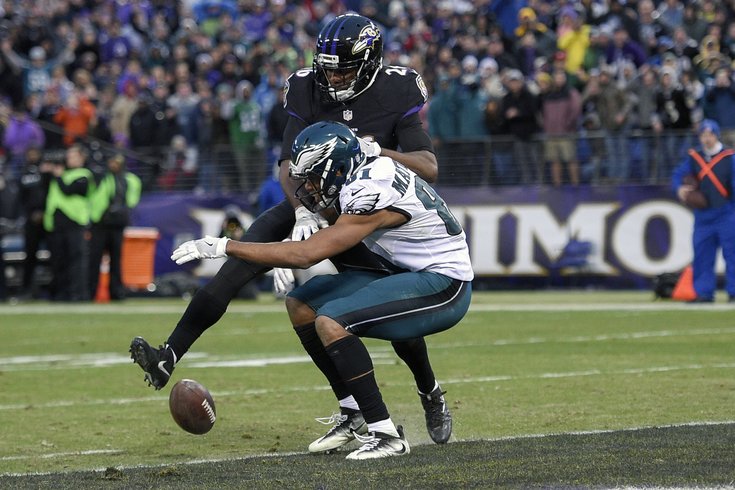 The Eagles had been in this situation before. Several times, in fact. But in every instance prior to Sunday, when they found themselves with the ball and a chance to tie or win the game late in the fourth quarter, they came up short.

Rookie quarterback Carson Wentz would throw a pick. Or he'd be hit while dropping back, knocking the ball out. Or one of the running backs would fumble. Or there'd be a dropped pass.

Against the Ravens, however, the Eagles finally capped off one of those late-game drives with a touchdown. And they did so against one of the best defenses in the league.

Only it didn't matter. Instead of going for an extra point to potentially tie the game and send it into overtime, head coach Doug Pederson decided to go for two. In fact, he had made up his mind long before Wentz's scramble into the end zone that he wasn't going to send Caleb Sturgis out and play for the tie.

"Yes," Pederson said when asked if going for two was the plan all along. "I had my mind made up that if we had a chance to go for it and win it, we were going to [try to] win it."

Unfortunately, Wentz's pass, which was meant for Jordan Matthews, was tipped at the line of scrimmage and fell short of its intended target.

So why was Pederson so steadfast in his desire to go for two?

"Listen, I want to win football games," he said. "And the other thing is, even our chances in overtime were less than 50 percent to win this game. So as an underdog going in, I wanted to win this game in regulation."

I agree with Pederson's decision to go for it, especially given where the Eagles are in their season -- basically, they had nothing left to lose. But where did the first-year coach come up with that less-than-50-percent figure?

"Those are just the numbers we ran, and being an underdog in this game," he said, which wasn't really much of an answer. "Besides, they've got a great field goal kicker."

Sure, but with the winds gusting and the somewhat new NFL overtime rules, I'm not sure why it's anything less than a 50-50 proposition.

Still, going for two was still the right call. That being said, what if the Eagles were still fighting for their playoff lives? Would it still make as much sense to go for the win?

That likely would be dependent on the result. But, just like in Sunday's loss, it shouldn't. That's called playing the result, which is a not-so-distant cousin of the hot take and currently one of the worst plagues on modern sports analysis.

If the Eagles had converted, no one would be criticizing Pederson. In fact, he would be getting tons of credit for being gutsy enough to go for it. You can't have it both ways.

The funny thing is, none of this would even be up for debate had the Eagles not been successful earlier in the game on a two-point conversion attempt.

If they kicked the extra point instead, the Birds would've been down eight points prior to Wentz's touchdown and Pederson would've had no choice but to go for two.

And if they failed on that conversion -- or missed the extra point in some pretty gusty winds -- the entire fourth quarter would've looked different, with the Eagles trailing by 12 points instead of 10, which is difference between them needing one touchdown (and a FG) or two touchdowns.

What is open for debate, however, is whether or not Pederson made the right play call, starting with the personnel.

Ryan Mathews, who ran for 128 yards against the Ravens' top-ranked run defense and score twice from close range -- he had a four-yard touchdown and the aforementioned two-point conversion -- was not on the field for their final play. Instead, it was undrafted rookie Byron Marshall.

"It really, in those situations, it's a got-to-have-it situation for both teams and you know you're going to be in zero-blitz," Pederson said, adding that Mathews was not hurt and was available. "It doesn't matter who the back is; they're going to cover up all the gaps whether you run it or throw it. Your chances of throwing it are actually a little better in that situation."

That's technically true, but given their success on the ground, and a Ravens defense that was gassed after spending nearly 37 minutes (or 81 plays) on the field, why not run the same play to Mathews that worked earlier in the game?

"We knew and anticipated zero-coverage, zero blitz, and it was just a one-on-one with Carson and Jordan [Matthews]," Pederson added. The ball just got tipped at the line of scrimmage. We had it; we had an opportunity there and it was one of our staple plays that we run against that coverage."

What about running play-action out of that same formation to try to keep the Ravens on their heels?

"Play-action in that situation, with the style of defense that came, it's going to be hard to get the ball off," Pederson said. "So it's better with just your one-on-one matchups. Listen, the play call, the play design, everything was built for that coverage. Credit them; they got a hand up and tipped the ball."

It's nice that Pederson wants to give credit to the opposition. But what he must not realize is that, at least for Eagles fans, it's a lot easier to blame the coach than admit outright defeat.