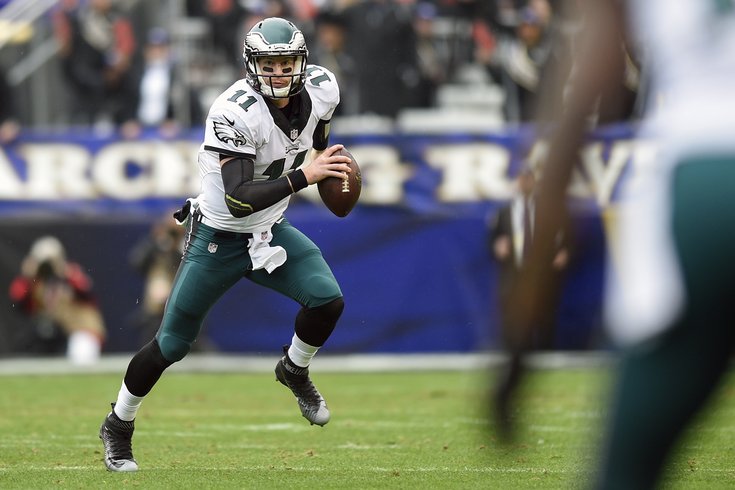 It's official: The Philadelphia Eagles have been eliminated from playoff contention thanks to their 27-26 loss to the Ravens on Sunday.

It wasn't for a lack of effort, as the Birds drove the field late and had a chance to tie the game or take the lead with less than 10 seconds remaining. Head coach Doug Pederson opted to go for two to get the win, but the Eagles came up just short.

MORE ON THE EAGLES:  First half observations: Ravens 20, Eagles 14 | Eagles 2017 opponents | Live updates, analysis/open thread as the Eagles take on the Ravens | Five over/unders for Eagles' Week 15 matchup with Ravens

Here's a look at the good, bad and ugly from the loss that essentially ended their season:

•  The most obvious place to start in this one is with the Eagles run game.

Good things happen when you commit to the run. What a concept. Wish the Eagles playcalling was deliberate like this all season.

Ryan Matthews had his best game of the season ... against the NFL's best rush defense. Heading into Week 15, the Ravens were averaging just 76.5 rush yards per game. The Eagles eclipsed that early in the third quarter when Mathews began gashing the Baltimore front seven in a way no other back has this season -- or in any recent season for that matter.

Mathews' 128 rushing yards most by opposing back vs. Ravens in Baltimore in six years -- since Peyton Hillis of the Browns had 144 in 2010.

Mathews finished with 128 of the Eagles' 169 rushing yards, the most allowed by the Ravens all season.

The Eagles also got some help from undrafted rookie Byron Marshall, who was making his NFL debut with Darren Sproles and Wendell Smallwood both inactive. His role changed when Kenjon Barner left the game with a hamstring injury. That being said, it didn't get off to a great start for the former Oregon Duck.

He turned it around, however, finishing with 22 yards.

•  And when you can run the ball, that tends to open things up in the passing game, especially on play-action.

•  Fletcher Cox had a big sack on 3rd down to stop Ravens first drive of second half and force punt. Why was that such a big play? Because it came a few plays after this big run on the opening play of the second half.

•  The defense decided to step it up in the fourth quarter. After a huge gain on a pass from Joe Flacco to Mike Wallace, Jordan Hicks came up with a huge red-zone interception, breathing some life back into an Eagles team that looked to be out cold.

•  The Eagles settled for a field goal on the ensuing possession to cut the Ravens' lead to seven points. And on Baltimore's next drive, the defense forced them to go three and out, leaving Carson Wentz and the offense with one timeout and 99 seconds left.

•  Wentz led the Birds down the field, with the biggest play coming on a sideline catch by Zach Ertz.

Nelson Agholor drew a pass interference to give the Eagles a 1st and goal from the one, setting up this TD run by Wentz.

After a timeout, Pederson opted to go for two and the win, but the pass was deflected and fell short. It was a loss, but it was still a hell of an effort from the Eagles.

Pederson and the Eagles opted to go for 2 to win the game.

•  Wentz didn't have his best game, although that was to be expected against this tough Ravens defense. And when the Eagles finally did go deep, Wentz under threw Jordan Matthews and was intercepted.

Eagles luck out after a defensive penalty pic.twitter.com/CepJzk4HDI

Luckily, they were bailed out by an illegal contact penalty. On the next play, Baltimore was hit with another 15-yarder -- this time for a late hit -- but the Eagles still came up empty after a failed fourth down attempt

Who's really surprised by this? pic.twitter.com/RetvMahkyd

•  Bennie Logan was hit with 15-yard facemask penalty, giving the Ravens a first down at the Eagles’ 16. On the next play, Kenneth Dixon scored.

That was, um, easy. pic.twitter.com/nwYefJdXVJ

•  After a run-dominant drive that saw the Eagles reach the Ravens’ nine, the third quarter came to a close. And when the scoreboard changed over to the fourth quarter, it was like Pederson had already moved past the run game that had been so successful. On 2nd/3rd and 7 from the Baltimore nine, Pederson called two pass plays and the Eagles had to settle for a field goal, rather than a potential go-ahead touchdown.

•  That was hardly the worst play call of the second half. On 4th and 2, Pederson decided not to kick a long field goal and instead ran a jet sweep with Nelson Agholor. It went about as well as you'd expect.